“How Do We Fall in Love?” A Psychotherapist’s Perspective. {Book Excerpt}

As a psychotherapist, I’m amazed at the gulf between how people think they fall in love and how they actually do.

We like to imagine that someone resonates with our core for reasons we can easily identify: she’s smart, he’s sensitive, she’s successful, he’s self-reliant.

But we’re less likely to think, say, “He winced the way my father used to before my father moved away forever,” or, say, “She raises her voice just like mom did. Hmm, it makes me feel she’s strangely familiar.”

In my new book, Stories of Love and Psychotherapy, there is a portrait of the odd way that a man, Robert, the therapist in the stories, fell in love.

He, Robert, was studying intensive Chinese with a woman, Carolyn, in class in Washington D.C. one summer.

They became study partners and, then, lovers.

There were so many ways he could have fallen in love with her but he didn’t. Not at first.

Attending class for three hours a day in the ridiculous Washington summer heat, and the sensuality of their wet clothes when they walked together after class. It was a feeling: we’re in this together.

Then there was the seductive thrill of a near-impossible task: learning a year of Chinese in two months. This stretched his brain and attention, which translated to his having a hyperawareness of the world around him, and she was in it: Carolyn’s speech, thoughts, gestures, body, movements, and their conversations all made a vivid impression.

There was a small sandwich shop on O and Prospect, and she took him there. On her recommendation, they had turkey melts and cortados and as they ate, she said, wide-eyed, “Can you believe what we’re doing?” and she laughed, an explosive burst. He saw the animation in her eyes and he thought, “This would make any man fall in love with her.”

There was the day they took a break to see the enormous Andy Warhol Mao, downtown. Nixon had reopened relations with China a decade before, the Middle Kingdom was stirring everyone’s minds and imaginations, and he and Carolyn were in the vanguard. They gazed up at the immense canvas with wonder and awe and, later, she turned to him outside the new I.M. Pei wing of the National Gallery, the outer wall forming a plane that looked as thin as a sheet of paper, and she said, “I’m going to live and work in China!” She was wide-eyed, exuberant, empowered, and sexy, but still, it only went so far.

And there were the long nights they spent in her bed. She rented the recessed level of a house on P Street. She’d light candles and play Keith Jarrett’s Köln Concert, and the long dank basement felt like a cathedral. The sex was powerful, too, and even more so for the weak air conditioning. He’d watch the sweat bead on her breasts and stomach, and after they’d finish, she’d tell him stories of her childhood, her sister who’d dropped out of school to be an artist, to the consternation of her father—whom she described as Athenian and stubborn. It was, all in all, remarkable; slated to be remembered as an intoxicating summer; a memorable affair.

And then one morning, everything changed.

He’d stayed over the night before, the sun had come up, and he asked if she had a razor he could borrow. She came into the bathroom, partially dressed, and she handed him a razor and a can of shaving cream from the medicine cabinet. Then, she leaned against the wall of her tile bathroom and watched him. He put on the shaving cream and began to shave.

Carolyn said, “You’re not putting water on your face first?”

“Don’t you even know how to shave?”

Years later, when he was long over her, he’d remember that morning and think: God, she was impossible. But in the moment, her words weren’t off-putting but registered as a code, one that he didn’t understand but had been waiting for. He couldn’t explain exactly what it all meant but, suddenly, he was in deeper.

…The thing is, Robert’s father had never taught him how to shave.

That morning in D.C., when Carolyn called him out on his shaving technique, he’d stood in her bathroom and felt humiliated and he was flooded with regret.

His father had been a good man but had problems with his son. It was that he preferred women to men, the result, Robert felt, of Robert’s grandmother dying of an aneurism when his father was thirty-one, and his father’s resultant yearning for the feminine. He became much closer to Robert’s sister, and his attitude toward Robert varied from being aloof to disdainful—the latter, often exhibited in his unsolicited career advice. His father, successful in business, expected Robert to follow in his footsteps. Robert expressed a desire to be a therapist, which his father let him know, repeatedly, “wasn’t a real thing to do,” and the older man’s skewed ideas slipped into Robert’s value system and took root. This would lead to Robert delaying his pursuit of psychotherapy for years.

Robert knew, on some level, he had so much he needed to resolve regarding that relationship before he’d ever be empowered as a man; before his real-life could ever begin. In the meantime, he was destined to experience the legacy of his connection to his father: feeling murky and confused all through his 20s.

When he and Carolyn sat in class that summer, or when they did three hours of homework together, or when they sat in a café, looked at the Warhol Mao in the National Gallery, or when they had sex, he was at each moment taken by the power and vitality of their connection and it ended there. But that morning when they were in her bathroom and she commented on his shaving, it registered as a code, but as only a hint, a mere whisper.

At that moment he knew:

This alpha woman will push me—will obnoxiously push me—to deal with things I don’t even know I have to deal with. It has to do with my father, somehow. This will hurt and it won’t be easy or desirable, but she’ll take me where I need to go.

And then, as fast as the thought had appeared, it was gone.

Still, when he left Carolyn’s apartment later that morning, her comment, don’t you even know how to shave? had morphed into a simple euphemism in his mind: I’m really into her.

And there it was, finally.

Used with permission, from Stories of Love and Psychotherapy by Kenneth Jedding.

Relevant articles about falling in love: 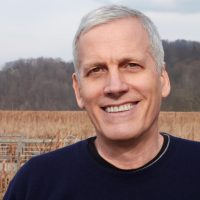