I Smoked for 15 years Until I was Finally Just Done with It.

Nothing pleases me more than when a client successfully stops smoking.

It is a feeling of joy; I do a little dance and praise the heavens above while I congratulate their achievement.

Despite all the evidence that demonstrates the harmful effects of tobacco use, it is the leading cause of preventable disease, disability, and death. I often show great disdain toward the behaviour as it not only contributes to poor health, but like most other addictive substances, it controls lives.

I, myself, smoked my first cigarette around the age of 11. The cost of a pack of cigarettes was under a dollar and they were not hard to get. Growing up in a tight-knit neighbourhood, the women at the corner deli did not think twice about one of us kids running to pick up a pack of smokes for one of our dads. The old chain-smoking Russian lady across the street often sent us to the store for crossword puzzles, milk, and a pack of Winstons. Who would have thought as young children that we would ever consider trying such a product? I can still smell her stale scent lingering in the street when I walk past a smoker’s house, and the visual of her spitting her tobacco-coloured saliva into a jar should have been enough to prevent us from taking this on.

I’m not even sure what made us shift from Barbie dolls and hide-and-seek to puffing on a cigarette. Nothing about this childhood adventure was enjoyable. Deviant Catholic school children hiding in the woods where the older neighbourhood children went to drink beer and smoke pot. The first puff was an assault, like a punch in the chest, the coughing, the burning, and the dirt-like taste that lingered on the tongue for hours. After our secret ritual, we would scatter to our homes for dinner. Running into the house, we all did our best to bypass a parent or older sibling to brush our teeth and attempt to wash the tobacco scent from our hands. If my mother commented on the smell of smoke, Mr. E always took the blame, “Mom, we were at Steph’s house,” and she seemed fine with that.

Fortunately, that experimental time at a young age was short-lived. The nasty habit did not stick, we were not all on board, we were a cohesive group. Though never caught, we feared the punishment of our parents, the possibility of no TV for a month or damnation to hell.

In a new school and trying to fit in, cigarettes were presented to me as a form of stress relief. At age 15 and stressed about being 15, I was offered a reason to hang and chat with the popular girls. A group of teenagers that have spent their entire childhood together, and then me, the new girl. We huddled in the smoke-filled bathroom, holding the cigarette in a manner that made you look inconspicuous as well as making for quick and easy disposal. There was always someone hanging by the door listening for the click of high heels from the English teacher, some girls announcing, “it’s okay!” as they walked in to let you know you were not at risk for detention. The first puff, no longer as harsh, usually gave a rush to the head, a tingling feeling, a moment of an alternate reality. It was a quick ceremony between the changing of classes that was exciting and made high school less painful.

I continued to smoke for about 15 years until I was finally just done with it. The risks to my health were taken more seriously and the financial impact no longer made sense. My mind was made up, I picked a date and it happened—I just quit.

Unfortunately, most people cannot easily let go of that surge of dopamine. The addiction to nicotine is so strong that even the threat of death does not motivate the smoker to stop. While cigarette companies are looking for ways to gain customers, public health officials are studying human behaviour to end tobacco use. Placing graphic pictures of black lungs and smokers with holes in their necks on the pack was not a random idea of deterrence. The CDC reports that smokers are motivated to quit when they see the physical impact on the body.

There are a number of medically approved and unapproved methods and products available to help one break free from tobacco use. Therapy, hypnosis, nicotine supplements, acupuncture, and copper bracelets to name a few. No matter which method is of interest, the true desire to quit is necessary for successful habit change.

I have heard on more than one occasion during a conversation with a client: “I have to want it,” bringing the cycle back to motivation. It is fair to say in order to improve the health of our population, youth prevention is of high importance and one should never even try a cigarette. Even though I work endlessly to assist clients on their journey to a smoke-free life, for some reason, after all these years, I randomly get this deep desire to satisfy an urge and a cigarette comes to mind. 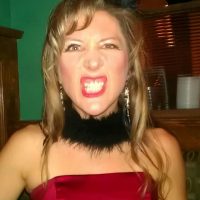 Karen Anderson has spent more than 25 years caring for children and adults in healthcare.  She studied at the University of Delaware and graduated with a bachelor’s in nurs… Read full bio