The journey of Self-Acceptance: Getting Sober & Embracing Gray. 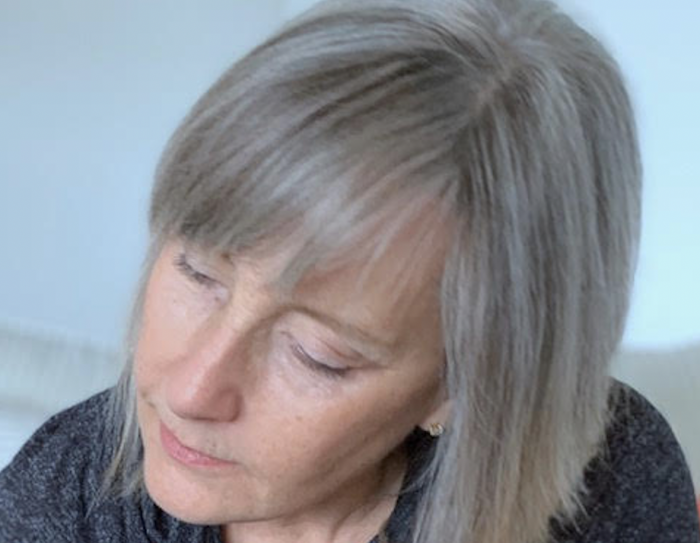 I found my first gray hair at age 12.

I had my first drink a few years later.

In my 30s, I started coloring and covering up those grays. As the years progressed and the grays increased, I dyed away the real me more and more. By the time I needed a touch-up, which was every three weeks, I was drinking daily.

I colored my hair and I drank because I didn’t want to look at my true self.

I saw the stark white roots that kept poking into my faux brown hair as ugly and shameful, as something to hide, a reflection of how I felt about the real me.

For years, I threatened to stop coloring my hair at a certain milestone—when I turned 50. No, maybe 60. The target kept moving. Similarly, but more quietly, I would tell myself I’d stop drinking at the end of the summer when I was ready to lose weight. That target kept moving too.

First, I wandered into a hair salon whose windows were decorated with clear glass skulls and fluorescent neon hairdo shapes. The place seemed to cater to the queer community, to which I didn’t belong, but I hoped their acceptance extended to recent transplants from the suburbs.

A white-haired lady wearing big, funky glasses stood behind the desk. I asked her how I could avoid a bright white skunk streak while I let my grays grow in. She touched my head, explained a kind of complicated transitional highlighting procedure, and showed me how damaged my hair had become from all those years of chemical abuse. She said she could help me. I let her, starting the process that day. 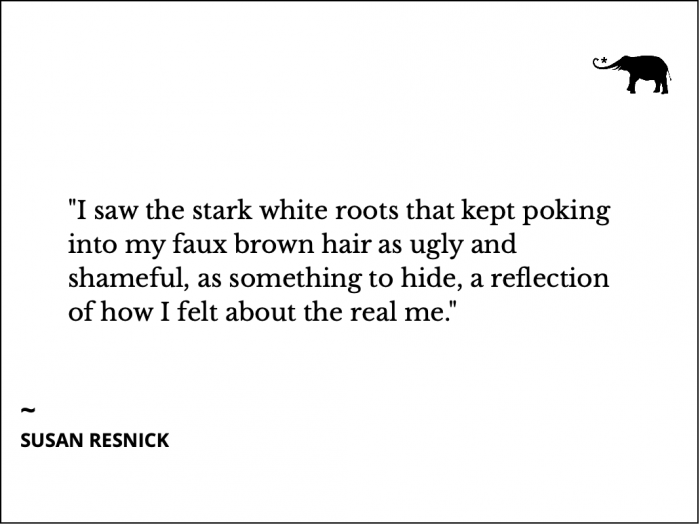 By the time I walked into the world of recovery, which was as unfamiliar as the salon had been, my gray hair was starting to growing out, though nobody could tell yet, due to those fancy highlights. Just as nobody knew I had been struggling with drinking.

I controlled my intake, which I soon learned was a sign of alcoholism (you shouldn’t need to control it), but I always wanted more than I allowed myself. My husband knew I drank daily, but he didn’t know about the cocktails and glugs from bottles I took before he came home or the furtive refills as I cooked. All of our friends drank as much or more than me, so none of them commented on how unhealthy my habit had become. One of my children noticed, but I dismissed his concern, and the other was already out of the house by the time I’d slid into full-blown alcoholism.

When people ask what brought me to recovery, they may expect a dramatic story about an arrest or driving under the influence, or a firm doctor’s order. None of that had happened, though I’m certain it would have if I’d continued to drink. More simply, it was a quiz on alcohol abuse in a newspaper that showed me, in black and white, that I had a problem. Calls to experienced friends led me to the help I needed.

As a newcomer to recovery in my late 50s, I didn’t feel I had time on my side. I’d finally found out what had been wrong with me my whole life and I wanted to get well. I did everything the sober people told me to do. While it felt like I was on a roller coaster through my first year in recovery, my hair took a straighter path.

The stylist told me I’d need several expensive treatments to make the grow-out look seamless, but after the first one, we both decided that my hair was doing fine on its own and didn’t need supplemental help. It was healthier and easier to manage without its disguise.

And that color that I’d been so ashamed of, my actual hair color? During all those years of faking it, I didn’t know what my hair looked like in its natural state. Turns out it’s a sandy silver that I like a lot.

Free from the saturation of alcohol, I see myself now, too, and I’m learning to appreciate what I see. Unlike the hair journey, though, that status can’t be maintained without help.

I recently celebrated a year of sobriety. At almost the same time, my stylist snipped off the last of my colored hair, leaving me fully gray. My once harsh, dark, brittle hair is lighter and softer now. So is my heart. 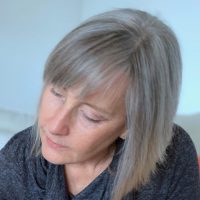 Susan Resnick is an author, journalist, social worker, wife, and mother. She lives near the ocean. … Read full bio