We Shouldn’t be Ashamed of our Womanhood: Our Bodies are a Freaking Miracle.

As my daughter crosses the threshold into womanhood, I find myself reflecting on her birth.

When I gave birth to her 12 years ago, it awakened something within me. It was a primal knowing, running a deep current within the very core of my being. When I think back on it now, giving birth was the catalyst to harnessing my birthright to divine femininity.

During what is commonly called transition in labour, I retreated to the bedroom alone to do the work that only I could do. As I went deeply inward, there was suddenly a presence in the room. Without opening my eyes, I started to feel my way around it. I soon came to know that it was my female ancestors in the room with me.

It felt like a cheering squad of all the ones who did this work before me to bring forth generation after generation. Their presence was loving and healing. I felt held and ready to welcome this tiny wonder into our family.

Etymologically to labour is to hang down, to hang loosely, to droop.

Later, it became to work or suffer. While both definitions are accurate, given that it felt like my womb was going to fall out of my body, the earlier version was fitting.

While I laboured on what will forever be etched in my memory as the princess bed, a large and tall, carved teak bed, I looked down at my swollen belly and watched as the child within began to push down the birth canal. Every muscle in my abdomen was moving down with fierce intensity. All I had to do was stay with my breath.

Many women before me warned me that I would need to find my breath during labour.

I remember thinking this was a ridiculous thing to suggest. How would I lose my breath in the first place?

Once I was in labour, I knew exactly what they meant. It’s less about finding my breath and more about staying with it. What I learned that day was that channeling my breath to the places of extreme sensation brought expansion. Breath became my guide through the pain.

At one point during labour, my husband was supporting me in a standing position and applying counter pressure on my lower back while whispering in my ear, “Yes, great breathing! Bring your breath down your spine to create space right here where my hand is.”

I remember thinking, I am so amazing at breathing! And then, I felt my cervix open with this love and acknowledgment.

The body is a miracle.

By the time our midwife arrived, I was minutes from giving birth. When she came into the bedroom, I was in the middle of a contraction. I was not actively pushing, but all of the muscles in my abdomen were pushing down with such intensity. I opened my eyes to see her beautiful face, and when she asked me how I was doing, I replied, “It’s time to get this show on the road.”

Although I planned to give birth in water, I never made it into the birthing pool. I didn’t with my second child either, but that’s another story.

I birthed our first child into the world shortly thereafter in a supported squat. She came out wailing. I laughed, my husband cried, and then, I sang her a song to welcome her home.

On Mother’s Day, a few years ago, I was snuggling in bed with my daughters talking about the eggs in our ovaries, and my youngest, then seven, marvelled at the thought of having not only been carried in my womb but also in her grandmother’s womb as an egg inside of me. I am in you and you are in me. Round and round we go.

The body is a miracle.

A couple of months ago, I had a vision that my eldest would start her moon time while she was staying with her grandparents, 300 km from home and that we would both start bleeding on the same day.

The vision was a flash, came and went so quickly, and I let it go, worried that it was based on a fear that I wouldn’t be there for her first blood. Not surprisingly, this is exactly how it unfolded. She was at her grandparents house when she started bleeding. Earlier that same morning, I too started to bleed. Even though we had been miles apart for several days, we synced up!

Again, the body is a miracle.

To celebrate her coming of age, we hosted an intimate gathering in our backyard. She planned the menu, all red food—tomatoes, peppers, red velvet cupcakes decorated like vulvas, red licorice, along with red tea, and punch.

Women who have been an important part of her life came with gifts and words to share about womanhood. We sat in a circle and wove a web of love, held up by stories of strength and honesty about what it means to be a woman. It felt like the most normal and supportive thing we could offer. When I asked her later that night what her favourite part was, she said it was sitting in the circle and feeling loved. What a blessing.

Etymologically, to bless is to make sacred or holy with blood. How fitting.

Women have always gathered around one another. It is as ancient as it is new. It makes me weep to think that so many of us have been shamed or blamed for our womanhood like we have a choice in the matter.

The number of times women experience hormonal changes should give us superhero status. And the fact that we can do everything anyone else can do while bleeding, well, don’t even get me started.

There is a quiet power in women that often gets overlooked or misunderstood. Some of us grow human beings in our wombs and then push them out of relatively small holes in our bodies, and most of us survive it.

We are life givers.

And yet, we remain undervalued on many fronts. As I watch my oldest daughter become a woman, my biggest hope is that she will come into her power and harness it for good. And that she’ll kick some ass and smash the patriarchy while she’s at it. 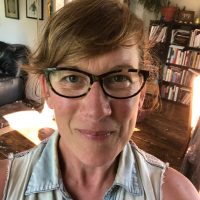 Trish Johnston lives on the doorstep of a national park in Manitoba, Canada with her family and animals. Known for her infectious laughter and wild heart, she’s passiona… Read full bio