This morning I spied my dirt-splattered hiking shoes on the front porch.

I’d left them there for a few weeks, their soles caked in thick mud. The trails have been a soggy mess recently, and these are my “mud” shoes.

This time of year in Park City, the weather is predictably unpredictable. One day, you’re reading a book on the deck in bare feet; the next, the fireplace is blazing and those bare feet are stuffed into slippers while fat snowflakes fall outside.

It can be frustrating, especially after a long, hard winter. It feels as though spring will never come. I’ve learned that when weather teeter-totters like that, there’s no point in trying to avoid the muck. It’s the mud season, after all.

Anyone who lives in a mountain climate is familiar with the term “mud season”—a definite transition period between the deep snowdrifts of winter and the glorious greenery of springtime. The ground takes longer to dry than the snow takes to melt.

Hopeful mountain bikers get turned away from trails while they firm up; deep tire tracks made too early can ruin the trail for the whole season. Dog owners make futile attempts at cleaning muddy paws, keeping a stash of ratty towels near the door but resigning themselves to floors decorated with prints. Those who hike often, like me, reserve a set of mud shoes that get kicked off at the doorway.

As messy as it is, there’s really no way around it, though this year’s mud season has been particularly challenging.

Those shoes on the porch were a dirty reminder of recent struggles that I’d been trying to forget.

When John and I got married in the fall of 2012, we knew we were ready to start a family immediately. We knew we were late to the baby party, hovering near forty years old. But as all wanna-be parents do, we thought it would be easy.

When our first anniversary rolled around at the end of October, we’d already been working at it for ten months— regular acupuncture, herbs and supplements, lifestyle adjustments, medication and multiple visits to more than one doctor. The winter’s holidays meant not only turkey, eggnog and a house full of beloved family, they also revolved around a rainbow of fertility drugs.

A frustrating year was punctuated by a difficult IUI experience and yet another negative pregnancy test. The cold, winter storms we’d gleefully welcomed in October were starting to mirror the darkness that grew with each disappointing month. But we weren’t ready to give up yet.

After Christmas (and our second failed IUI attempt), it was time to pull out the big guns. We dove whole-heartedly into our first IVF cycle, spending February in a fog of hormones and ultrasounds. No one should start her day with five injections in her tummy, but we did it anyway, fingers crossed with hope.

I bid adieu to February watching the Winter Olympics from the couch, on doctor-ordered bed rest after being implanted with three growing embryos. We lovingly called them the Dream Team and prayed that at least one of them would “stick.” My daily routine and mind-clearing hikes with our dog, Cholula, sat on the back burner while we nervously waited to see what fate held in store. Then, in those still-gray days of late winter, we finally felt a warm sunbeam.

The stars had aligned and month thirteen proved lucky: we’d be parents before Thanksgiving.

We didn’t wait long to share our news with loved ones. Their support and love during our struggles had been a key ingredient to our success, and it’s hard to describe the joy of telling them that it had worked. I resumed my hikes, trying not to slip on the loosening snowpack. We had our first sneak peeks of springtime, sunny days that started to melt away the long winter. Our hard times were coming to an end.

It’s shocking how quickly the world can change. After multiple blood tests to confirm our baby was growing on schedule, we visited the fertility clinic for our seven-week ultrasound. This was a big day: we’d not only hear a heartbeat, but maybe more than one.

One second, we were giggling about the possibility of twins, the next, our doctor was uttering the words, “Unfortunately, I don’t have good news for you…”

I didn’t hear what she said after that. Her words were muffled nonsense, like how the grown-ups sound in Charlie Brown cartoons. I felt my husband’s fingers find mine as I stared at the ultrasound screen, at the blurry blob that was our baby—without a heartbeat.

The doctor kept talking, talking, talking about genetic abnormalities and miscarriage percentages. I felt the blood leave my face and had to lie back down. There wasn’t an “it could still be okay” option. This wasn’t a nightmare from which I’d awaken.

We spent the following weeks in a deep pit of despair. We’re far from the first hopeful couple to feel this specific, torturous grief; membership numbers to this particular club are staggering. But why couldn’t anything just be easy?

I tend to keep the past behind me, pushing negative memories of hard times out of my mind and looking toward the future. But today, after spying those shoes on the porch, I thought back on other challenging periods in my life.

My parents choosing to move our family from Los Angeles to Never Heard of It, Colorado was traumatic for my seventeen-year-old self. From the moment I got there, I was stubbornly plotting to leave.

There were those dark months after my first marriage ended, when I lived solely on frozen pizza and red wine with the shades drawn tight.

I still recall the heartache I felt when a dear friend unexpectedly ended our relationship a little over a year ago.

And John and I have faced all sorts of obstacles together, some before we’d even started dating. In every situation, I’d felt defeated. Helpless. This wasn’t the first time I felt stuck in the mud. But each of those chapters of my life ended with me getting up, brushing myself off, and moving on. And surprisingly, once the dust finally settled, those challenges revealed a better life for me.

The last time I’d worn those muddy shoes, I was hiking the trails with Cholula for the first time since the miscarriage. She’d stared at me until I felt guilty, finally prompting me to get off the couch and go outside.

The sun was playing peek-a-boo behind a particularly dark cloud that threatened rain. Every now and then, I paused at a sharp rock to scrape thick mud off of my shoes. At the top of the hill, I sat on a boulder to catch my breath and take in the view. In the distance, the clouds parted momentarily to reveal the peaks across the valley. Thick with snow just a few weeks ago, only the tops were covered now.

I felt the weight on my shoulders of all we’d been through and let the tears run down my cheeks, not bothering to brush them away. I’d experienced every emotion imaginable recently. 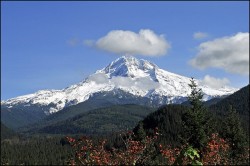 Weeks after that hike, I now have more clarity. I remember spotting the first flowers of the season. I remember the green grass along the trail, the new growth on the sage, the fresh buds that were popping up through the soggy ground.

It’s the thick mud that nourishes that new life and makes it possible to flourish after a long, hard winter.

I watched Cholula’s tail bounding through some brush, likely chasing a mouse or a bird. Her persistence always impresses me. She doesn’t catch them, but she keeps trying. She might never catch them but continues to try.

The storms of the season aren’t over yet, and neither is our journey to parenthood. I have no idea what the future holds for us. We might never catch up with our dream. But I’m grateful for this in-between time; it’s an opportunity to slow down, take a breath, and scrape the muck from our shoes.

Some things are out of our control. Stormy times are paving the way for days brighter than I can imagine now. At some point the sun will come out…and stay out.

This morning, the sight of those filthy shoes triggered something in me. I don’t want the fear of getting too dirty to keep me from experiencing something amazing. So I opened the door, picked up my shoes, and beat them together until the dried mud fell off in big chunks. I put them on and headed for the trails with Cholula.

Each step felt lighter; without the mud, I was carrying less of a burden.

The trails are drying out.

Though it feels long, the in-between season eventually ends—and no matter how thick it gets, the mud will come off. 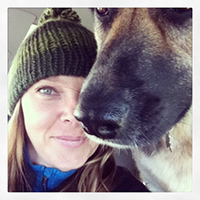