Loving a Man who Doesn’t Want to be Loved.

I’m in love with a man, named Finn, who I never thought I would be able to love.

His idea of love is the antithesis of mine.

What that means, though, is not as straightforward as I would have thought.

My concept of love has changed a lot over the years, and I argue it becomes more mature with time.

I’ve had the juvenile kind—the crush in elementary school when I told my secret to my friend, Allie, and she told others, and then my crush, Kevin, yelled it at me in the middle of freeze tag on the playground.

I’ve had the clingy kind, like the pack on the back of a marine who’s exhausted and doesn’t want to carry it anymore. I’ve gotten so intimate with someone that we were a unit, and people asked me about them and them about me.

I’ve had the jealous kind, full of incessant texting.

I’ve been afraid and hidden from my life in a dark room with hours of Netflix—I think it was “Shameless”—and a pint of Ben & Jerry’s “The Tonight Dough” ice cream.

I’ve sobbed in my Subaru—at 2:00 a.m., in a dark parking lot, in the middle of a snowstorm—because my heart felt ripped in two. I have loved so deeply that it almost tore me apart, and I remember dropping 10 pounds in two weeks. I couldn’t eat, I felt so much distress and nausea.

The type of love that teaches you with pain, that I have done.

The type of love that feels like ecstasy, that I have done.

The type of love that burns you as it ends, that I have done, too.

Finn, I have not.

Funnily enough, we met via Bumble. I took a risk and drove 20 minutes to his house for a steak and potato dinner (it was delicious). When we met, I immediately liked him. I remember he asked permission and then hugged me first off. He smelled amazing. It was perfect. It was scary. It was like a dream.

Three months later, I asked him, “How do you want to be loved?”

And his answer was literally, “I don’t.”

That’s not the answer I wanted or expected.

That’s not an answer I was prepared for, or knew what to do with.

That’s the answer, when I truly looked at who he is, I knew he would give.

What the f*ck do I do with that?

Now, I conceptualise my world as built on love. I love people, I help them. I love lifting, I do that. I love sunsets, I look at them. It is not an ambiguous, fancy word for me. I know when I love—it is a cheerful warmth in my chest that lifts me up and pushes me higher. I argue that love is my primary emotion. It drives me.

So, someone asking me not to? Confusing.

Yes, I know that love is a result of mostly chemistry, attraction, and shared experiences. The more time you spend with someone, the more your brain patterns like them. It’s all neurochemistry. There isn’t any serendipity or one person. Certain people exhibit traits that make them higher value, pheromones play a part, and there’s physicality.

Yet I fully and truly still try to hang onto the magic. I do not want that to be lost.

He does not value love or the magic that comes with it, not in the way that I do. He sees it as getting in the way or as clouding his vision. As driving people to pain and staying with things too long or allowing behaviour that should not occur. Or as putting aside personal goals for the sake of love.

I do not think that developed love creates environments where such things occur.

It helps that my love for him is rational and at least based in reason—I have an understanding of why love occurs and what it is—yet it’s also a combination of the timing, luck, and awareness of how I made the space in my life that allowed him to enter. It is, essentially, more mature. It allows me to hold that I may love him and not get that love in return.

I did not think I would be able to love someone who doesn’t value love.

And that’s the kicker.

Naturally, I also have the desire to be there for him, whenever and however he needs me. And here’s a part I’m noticing is different:

Often, what he needs from me is…nothing.

Our day-to-day is mundane in many ways. We spend time together and give each other advice and value without expectation.

I accepted him at the start, though it was scary. It comes with the territory. If I’m going to care about him, I have to accept that he’s a certain way. I went in with open eyes, endeavouring to see him as he was, not my interpretation of him. And I kept in mind that he cannot be everything I imagined a lover would be, and that’s actually okay. I was fully aware that choosing to love him was going to frighten and challenge while not giving me everything that I think I want.

And I chose. It was probably influenced by his holding many of the traits I admire. He’s high value. And we have chemistry. Which, in my 22 years, I haven’t genuinely encountered before.

My father said something to me that stuck, which was: “When there is true chemistry, you run with it and see where it goes.”

Now, I try to love him by not loving him. Which means what, exactly?

I think, in essence, it means being present and aware. Love is usually selfish. I do not solely let love drive my interactions with him. Reason gets a place. Not loving him that way, is truly loving him.

And that is a practice.

For me, it’s showing up and being present for him when I’m with him. And allowing a little more of the vulnerability he seems to have shed so openly toward me, toward him. The point is, that annoying word: mindfulness. Not worrying or daydreaming about the future. A gentleness. Just taking each time spent as a gift, letting it go, not demanding more, and at the same time allowing space for the hope of more.

And that, my friends, is what I think mature love truly is. 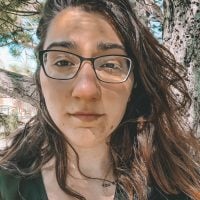 Alexis Bakalakos focuses vary, but stay informed by her roots of trauma, rest, somatics, evidence-based practice, and doggos. Currently (as of June 2021) you can find her at … Read full bio