Being Mindful While Being in the World.

Whenever someone asks me how I first discovered Buddhism, I tell them the following: “Richard Gere“.  That usually brings a laugh but it is seriously how I first came to know about Buddhism.
�
I was a teenager and had seen the movie Pretty Woman, after which I developed a huge crush on Gere.  As any normal teenage crush would go, I researched the object of my affection with full fervor and, since there was no Internet at that time, off I went to the library to do it the old fashioned way.  With each article and interview, certain words kept coming up that caught my attention.  The words were: “Buddhism, Tibet, and the Dalai Lama”.�
�
One thing I remembered distinctly from the interviews is that Gere felt Buddhism had saved his life.  To my teenage ears, that idea really struck a chord.
�
Even though I was intrigued that Buddhism could save someone’s life, I had no desire to actually read more about it.  I was young and had other things on my mind that held greater importance.
�
There is a Buddhist saying that “when the student is ready, the teacher will appear”.  Well, I was not ready for my teacher until 1997.  I was in law school and my life was a mess.  I had no clue what I would do after I graduated.  I was not in love with the idea of being a lawyer but I had no idea what else to do with my life.
�
I made an appointment to meet with one of the career counselors at the school.  The day before my appointment, the career counselor’s office called and told me that the person I was supposed to meet with had to cancel.  They said that there was another counselor available at the same time and asked if I would be okay with the change.  I personally could have cared less which counselor I talked to.  I just wanted answers.
�
The next day I went to my appointment and was greeted by this really happy woman.  We went to her office and the first thing I noticed was that she had a little table with a statue of Buddha.  It was the first time I had ever known of a lawyer to have a Buddha statue in their office.  Actually, it was the first time I ever met a really happy lawyer.
�
She and I talked about my situation and finally, towards the end, I asked her about the Buddha statue.  I have no idea why I felt such a need to ask such a question.  It was out of character for me, at the time, to ask about such a personal matter.

�
Looking back, I think the reason for asking about the statue was that I felt so lost and she seemed to be just the opposite.  I wanted to feel more like her instead of being the miserable person that I was at that time in my life.�
�
The counselor was not upset with my question.  She went on to tell me that she was a Tibetan Buddhist and that she taught a course at the school about combining Buddhist principles with the practice of law.  I admitted to her that I was interested in Buddhism but never really looked into it so she suggested I take her class.  For the record, that afternoon, I had no intention of taking the class.  Goes to show you that a person should never say “never”.
�
Two months later, I was creating my schedule for the following semester and needed one course to fit in with the rest of my selections.  The only class that fit was the Buddhist course and I had no other choice but to select it.  As life would have it, I was closed out of all my choices except for the Buddhist one.  In all my years of being a student, I never had something like that happen to me before.  I have been closed out of one or two classes, but never four.
�
When I walked into that Buddhist class on the first day, I had no idea how my life would change.  I learned about meditation for the very first time and was exposed to a way of thinking that not only made sense but spoke to my heart and soul.  The concepts seemed so simple and obvious yet they were extremely profound.  I knew I had found the answer to the void that I was feeling for most of my life.
�
On paper, my life looked great, but it felt lacking.  No amount of romance or chocolate or shoes or books or money or good grades or great jobs would erase that nagging feeling that there was something I was not seeing.  It never occurred to me that all I needed was a shift in perspective when it came to life.  I was always fortunate to be an optimist but sometimes you need more than just being hopeful. That is where Buddhism came into the picture.  It provided me with the tools to see life from a different perspective.�
�
To make a long story short, I ended up falling in love with Buddhism and went on to be my teacher’s assistant.  That teacher is now a very close friend.
�
While Buddhism is not the only source of my spiritual beliefs, it did end up saving my life.  It began a wonderful journey which took me from being a miserable, lost human being to a happy person who loves life.  The road was bumpy but worth it.
�
I have traveled the world; lived in India, been to ashrams, hung out with Buddhist monks and so much more.  Buddhism has become a part of my life, whether I am at my job or on my way to the store or even on Twitter.  Buddhism, in my opinion, is not so much a religion but rather a philosophy of how to be in the world, yet somehow not be too effected by all the junk. It is my wish to share my journey with all of you here. Will you join me for the ride? 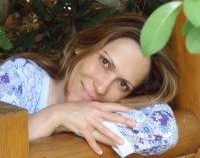