My Father: Starting Yoga at 87. 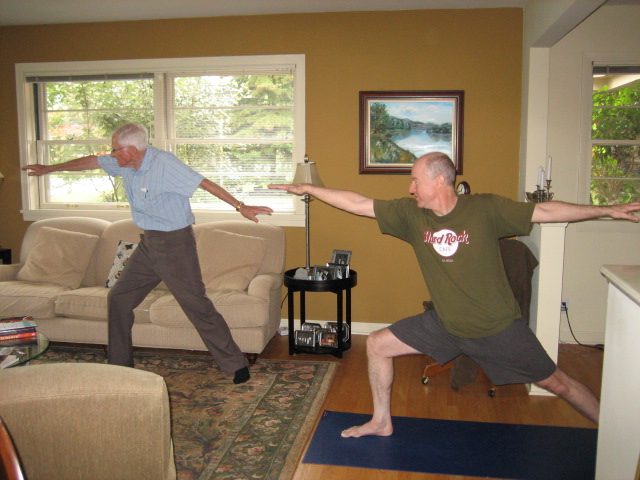 Published a few years back. Thought we’d re-feature this in honor of good dads everywhere. ~ ed.

I thought long and hard before publishing this article.

My 90-year old father recently entered hospice care and only has a few months to live.

I hesitated because everyone has sad family situations like this, and I knew I wanted to write about it partly just to deal with the painful anticipation of losing the father I love so much.

Ultimately, I was able to justify it by reminding myself of the Yoga connection, and by reprinting an article about my father that appeared on the Sunday front page of the Milwaukee Journal Sentinel two years ago.  I figured if Milwaukee’s daily newspaper thought it was interesting enough for its front page, I shouldn’t hesitate to think it might be interesting to Elephant Journal readers, too.

The photo above shows the Yoga connection. My Dad took up Yoga for the first time when he was 87.  He saw me doing it, and wanted to do it himself. So I showed him few things, gave him a copy of “Yoga Made Easy” by Howard Kent…and soon enough it became part of his regular routine (along with his weight-lifting and exercise machines.)

Below is the article from the Milwaukee Journal Sentinel, which captures this wonderful man who is my father pretty perfectly, I would say.  (Gee, I wonder whom I owe my joie de vivre to.)

I hope you enjoy reading it.

He was 88, and his grown kids wouldn’t let him buy another car — his reaction time had slowed, they said.

But the former Navy pilot wanted to be mobile, to have fun, to cruise Milwaukee’s byways like a teen in a ragtop.

So, he and his son started a search for another vehicle. A motorized three-wheel bicycle was too complicated. A moped was out of the question. But one day in August, father and son walked into a store and saw the perfect set of wheels — an electric, four-wheel mobility vehicle with comfy swivel seat, rearview mirror, turn signals and horn.

They bought it used for $1,200, and Weisenberg climbed aboard.

Now, it’s hard to get him off the vehicle or off the sidewalks. Weisenberg doesn’t just go for spins in the neighborhood from his home at St. John’s on the Lake retirement community on Milwaukee’s east side.

He takes full-fledged daytrips, at 5.75 mph, up to his son’s house in Fox Point or down to the Basilica of St. Josaphat on the south side, extended treks by the lakefront or long days of window-shopping downtown.

“I wouldn’t trade my scooter for a car,” Weisenberg said.

The story of Weisenberg and his mobility vehicle is a small tale of modern life in aging America. Just because a senior gives up his car keys doesn’t mean he has to give up his independence.

But it takes a lot of work and planning.

Some seniors who decide it’s no longer safe to get behind the wheel of a car might take a seat on a bus. Others might get rides from friends and family or take cabs.

But for Weisenberg, the mobility vehicle works just fine, the best of both worlds.

He still enjoys a good walk around the neighborhood, but the man can really drive. He can artfully turn the vehicle in his apartment, zip down hallways and roar down the sidewalks.

How father and son negotiated the switch from a car to a scooter is the stuff of family drama. They hashed it out over nearly two years.

“I loved cars, I always had cars,” Joe Weisenberg said. “And I loved driving.”

But after Joe Weisenberg’s second wife died in January 2006, his son had that talk that most every grown child secretly dreads — the one where they try to convince a parent that it’s time to give up the car keys.

But the father listened to the son. He sold his Chrysler convertible before moving from a retirement home in Pennsylvania to spend a year living with his daughter in San Diego. Living in the suburbs, he felt isolated without a car. But he did his best to keep his independence, walking, getting rides. But he couldn’t bring himself to take a cab, it felt so extravagant.

In March, Joe Weisenberg moved to Milwaukee. And he started lobbying for wheels.

“Dad was talking about buying a motor scooter,” Bob Weisenberg said. “Every time he saw a Vespa he’d say, ‘I’m getting one of those.’ After a while I thought he might be serious, so I started some research.”

Father and son made the rounds and found the perfect vehicle.

What advice does Bob Weisenberg have for other grown children faced with the dilemma of coaxing their parents into giving up driving because their skills have diminished?

“You have to make the decision and stick with it,” he said. “If I were doing it again, I would try a lot harder earlier to find an alternative.”

It might be getting colder, but Joe Weisenberg still makes his daily treks, exploring a city he has come to love. He has places to go and people to see.

“The question is: What do I do when it starts snowing?” Joe Weisenberg said.