There is always a whole lot to be thankful for in my life. I am a rather healthy, what you’d call kinda “normal”, robust 24 year old doing some pretty cool things with my life. But when it comes down to it, there are some pretty inspiring people on this planet that have been faced with disability, strife, illness, disease, family craziness, and a whole-lotta crap, and are still here to inspire, lead and tell their story in ways that I can only imagine. Yeah, I know I am a rockstar, but the stories I am going to share with you today really do encourage and move me… and I hope they move you, too.

Michael J. Fox is known for his quirky roles in the Back to the Future trilogy, as well as the 1980’s sitcom Family Ties. In 1991, he was diagnosed with Parkinson’s disease, the degenerative disorder where the central nervous system breaks down, causing movement and speech disorders that are both chronic and progressive. Overcoming addictions and his illness, Michael has gone on to write three books full of zen-like suggestions and how to be in the moment with life, offering up the quote; “Leave the past behind and live in the moment.”

Another famous man with Parkinson’s, Muhammad Ali, is a three-time World Heavyweight Champion, and is widely considered one of the greatest heavyweight championship boxers of all time. According to the Ali Center’s website, “It is estimated that he has helped to provide more than 22 million meals to feed the hungry. Ali travels, on average, more than 200 days per year.” At the last Olympics, Ali struggled just to climb the steep stairs of the stadium before his shaking hand held high the Olympic Torch. Definitely a touching and heroic moment for all those touched by strength, weakness and racial adversity.

In October 2010, Argentina will host the Argentina will host the Amputee Football World Cup. As the World Amputee Cup Soccer Player Rules state; “Outfielders may have two hands but only one foot. Goalies may have two legs, but only one hand.” Streaming across the soccer field in sweaty leaps and strides, these players don’t hold back. And why should they? I can’t play soccer at all, and when I try, I often collapse in a giggling, helpless heap. I would be whooped by these players in an instant, but what can I say? People take for granted being able to walk down the street, being able to jump or play sports without a second thought.

Disaboom.com offers up that “Tom Whittaker is astounding and the first disabled person to climb to the summit of Mount Everest. In 1979, Whittaker’s right foot needed to be amputated after a car accident. In 1998, after three failed attempts, he fulfilled his lifelong dream of climbing to the summit. Not satisfied with this feat, his current dream is to climb the highest peaks on all seven continents.” I don’t know about you, but I would have stopped after the first time… with both of my feet.

Also interested in Mount Everest, Sean Swarner was diagnosed with two completely different types of cancer, once at the age of 13 and again at the age of 16 where he was given fourteen days to live and read his last rights. He astounded the medical community when he survived both these brutal diseases and a medical-induced coma. Sean realized that after defeating cancer twice, no challenge would ever be too great or any peak too high.

Sean proved his theory when he crested the peak of the highest point in the world (Mount Everest) with only partial use of his lungs. As the first cancer survivor to do so, Sean decided to continue climbing and has since topped the highest peaks in Africa, Europe, South America, Australia, Antarctica, and North America. www.seanswarner.com

One of my favorite stories though, is about Daniel Tummet, who was born with congenital epilepsy and who also has autism. Personally, I have completed Pre-Calc in college, and I am pretty sure that I got a C+ in that class. Daniel holds the European record for memorizing and reciting pi to 22,514 digits in about five hours. I suck at French. I have taken it for over four years, and even had a private tutor in sixth grade. Daniel can speak French, Finnish, German, English, Spanish, Lithuanian, Romanian, Estonian, Icelandic, Welsh, and Esparento.

Real life super heroes… people with amazing abilities despite the odds are all around us. No doubt we are all special, gifted and talented in a variety of ways, but still, it is leaders like these who challenge us all to be the best we can be, each and every day. For me, I am definitely going to try for an A this fall in school in French, but mostly just love how the strength and adventure of these amazing people leads and inspires me. Every gift is a gift from God… we just go out and do our best. 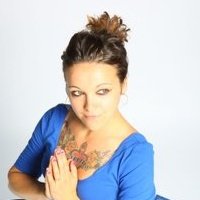 Amber loves yoga, pancakes and going on adventures. A business and yoga teacher, Amber enjoys writing and teaching about such things. Learn more about what she is up to her … Read full bio