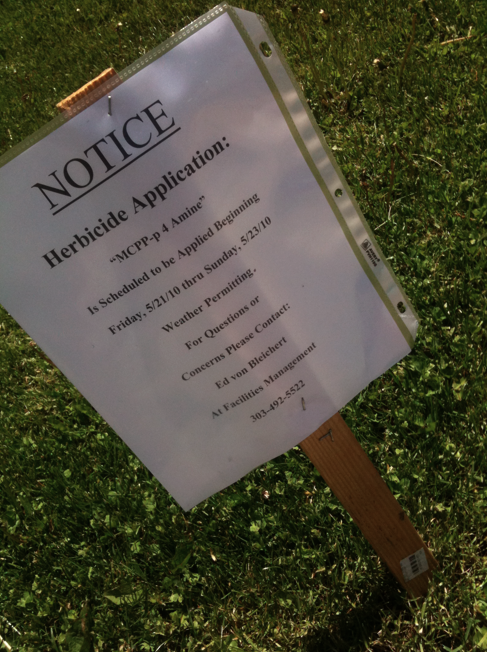 It’s Spring! You know what that means…time to herbicide (fancy word for poison) our lawns!

Keep off the Grass!

Concern over pesticide use at University of Colorado at Boulder.

“Why I won’t be running this year’s Bolder Boulder.”

A Mild Poison in a Green, Health-minded town where Students + Dogs Study + Play.

“Campus turf areas play an important role in preserving one of the most beautiful campuses in the world. Campus fields, quadrangles, and courtyards are in high demand for campus and community events. The beauty and maintenance of the campus also plays a subtle role in student, faculty and staff recruitment, gifts and donations, and the quality of the work environment for our employees. The need to maintain this valuable resource while minimizing the use of chemicals is an important goal of the Integrated Turf Management plan, also established in 2002. Compared to many commercial or golf course operations, the campus applies herbicides 50 percent less often. Herbicides are applied only to predetermined pieces of a particular area.” ~ Chancellor Philip P. DiStefano

The Bolder Boulder 10K race on Memorial Day is where I fell in love with Colorado.

It was 1998. There was plenty of snow left on the peaks in the high country. The air was crisp and cool. I thought I’d found a utopia. You couldn’t ask for a more exciting event in such a beautiful setting, as over 40,000 participants in 88 waves filed into Folsom Stadium on the campus of the University of Colorado at Boulder.

Then the real fun begins. As the last of the citizen participants trickle in, you get to witness the International Team Challenge where professional men and women athletes compete. It’s all played out to the stadium on huge TV screens with helicopters flying overhead to video the progress of each race.

Afterward, there is a jaw-dropping Memorial Day tribute to the men and women of our armed forces whom have given their lives to defend our country, complete with ski divers, military jet flyovers, 21-gun salute and Medals of Honor.

Who wouldn’t love it?

But last year, as I was preparing to run the race, I became aware that the campus of CU Boulder was being sprayed with a herbicide called MCPP (Mecoprop) on the very weekend of Bolder Boulder.

In 1998, I probably wouldn’t have given it much thought. But in 2009, 10 years after I was diagnosed with breast cancer, and right as I was being diagnosed with respiratory issues triggered things such as pesticides and fertilizer, I decided to skip the race.

This weekend, thousands of happy, healthy runners will come onto the scene of the campus, plop themselves into the cool, green grass surrounding the stadium to rest, all the while oblivious that CU has treated the grassy areas of campus with MCPP once again. The participants and their families don’t have the slightest idea that MCPP is a chemical that doesn’t have a good comprehensive study of chronic health effects to back up its use.

Side effects: MCPP can last up to two months, so spraying so close to having so many guests is negligence. I brought this up to the university last year and they gave me rhetoric as to why they feel it is safe to use.

But I’m a mom, and Mommy Meter says otherwise.

Short-term side effects from exposure to MCPP include headaches and dizziness. (One of the manufacturers of MCPP is Bayer. Yes, the crop science division of the aspirin manufacturer.) How many runners will feel this, but confuse it with running at altitude? Other side effects can include coughing, respiratory tract irritation, cloudy vision, increased heart rate and aggressive behavior, all of which could be attributed to altitude and our dry air. In the lab, this chemical can be responsible for cleft palate, heart defects, kidney anomalies, problems with bone formation, as well as adverse sperm and testes changes.

Since this chemical is not tested at length for chronic health effects, so the immediate and long term effects are not truly known as a chemical that can be absorbed in the skin, breathed into the lungs through residue or ingested as people eat their Bolder Boulder snack on the lawn without washing their hands.

Next, participants should understand how MCPP works. It interferes with growth hormones of the plant. It causes a complex reaction that effects cell division, modifies phosphorus metabolism and modifies nucleic acid metabolism. It kills plants by imitating naturally occurring plant growth hormones. The human consequence to this is that MCPP is a potential endocrine disruptor. Endocrine disrupting chemicals have been linked to ADHD, Parkinson’s, breast cancer, prostate cancer, diabetes and other chronic health issues. Again, MCPP, because it is not used for food production, is not tested at length for chronic human health effects.

The Cancer Assessment Review Committee classified MCPP as “suggestive evidence of carcinogenicity, but not sufficient to assess human carcinogenic potential.” Yet, it has been linked to soft tissue cancers and non-Hodgkin’s lymphoma. Though evidence is “suggestive”, it is not deemed enough to develop a conclusive review. Even if it were, it would be up to the manufacturers to show burden of proof, which is a direct conflict of interest.

In addition, it is toxic to bees..!

I guess we should all be thankful CU chooses to use the chemical they feel is least toxic to human health!?

Armed with all this information, as much as I would love to run the Bolder Boulder – to partake in the citizen’s race and pay tribute to members of our military – I choose to stay home and KEEP OFF THE GRASS!

Bev Veals was a stay-home mom and runner living in the Piedmont of North Carolina when she was diagnosed with breast cancer in 1999. She moved with her husband and two kids to Colorado in 2003 to fulfill a dream of retiring in Colorado. In 2004, Bev was diagnosed with an advanced stage recurrence. Since then, she has tirelessly worked to find the answer to the question “Why do I have breast cancer?” Bev has found links of environmental factors to breast cancer, with one major red flag being pesticides. Bev hopes to educate parents about the dangers of pesticides through an educational program called Project SafeYard(TM). In 2009, Bev lost her health insurance and has had to return to North Carolina to be close to family, but is still concerned about Colorado because of the amount of ornamental pesticides used in the front range to keep the lawns “east coast green” in a high plains desert. “Obsessively green chemically treated lawns are as about as natural as plastic surgery. The appearance may look nice and natural, but it’s far from the truth.”