Training for a marathon in…Thailand! (Or – how to run in a monsoon!)

We are sweating even before exiting the apartment, the A/C just barely switched off. The air is reaching 40 degrees Celsius and the humidity is crawling to 100 percent. Hot, hot, salty water clings to our clothes and never lets go.

It’s 6 p.m., the street on a Sunday is full of hollering in all pitches; things being bartered, CFCs and pollutants and diesel fumes…all the good stuff…filling the lungs. Fresh, fresh air to inhale while training for our marathon! All we need to do is close our eyes and picture running in the woods. It’s easy. But not really.

We walk—or dodge—past hindrances, the mile to the park, which isn’t really a park but some patches of green separated by concrete paths and then leads to another park which is indeed a park and actually is green with much less noticeable concrete paths in between. Coal-fired sausages and whatnots are chain-smoking and motorcycles bumble past us as the sidewalk – though not designed for walking here – is dirty, filthy, stained with diesel fuel and Buddha knows what else.

The t-shirt designed for sweating is splotty with sweet sweat and the heart murmurs to the case it’s in, telling it to stop. But as man was designed to do, we go against nature and we – train for a marathon in the tropics. Not only that, but in the middle of one of the most heavily polluted cities in the world.

Sweet Jaysus! What are we thinking? Look at those rainclouds. Listen to them rumble as they try to repel us. The leaves of the Banyan trees gossip about us – the crazy foreigners – running into the eye of the monsoon. Yet we prevail. After a sticky 3 mile loop, the monsoon clouds give way, showering us with a hot, incessant waterfall from the sky. And the squishy frogs begin the night’s DJ session.

We seek asylum with fellow runners ‘neath a humble roof, where the park guards hang out on their breaks. This monsoon will likely subside in the morning, which is only, what, 11 hours away? So much for our 10 mile training session today. Sundays are for the long runs. We could imagine running 7 miles. Else we become treadmill warriors.

Our halfway futile attempts at running in monsoons have not accumulated many miles under the marathon training belt. 2 months prior to the race date, I decide I need to give my lungs a break from the Bangkok air and enlist in a gym. This is something I normally wouldn’t do back in Colorado, a runner’s paradise; however, my lungs tell me that they cannot cope with the pollution any longer. Why inhale the equivalent of packs of cigarettes a day while trying to be healthy by running? It’s a paradox.

I believe that going to the gym here is a bit of a cultural experience. What I sense is that it is more of a display of self than anything else. I guess as is typical in gyms, there are mirrors – everywhere – and I really do feel as if in a zoo. I try not to care too much because the reason I’m here is to train for a marathon, albeit on a treadmill.

I get the treadmill going at what seems a steady pace, and do a 10K “loop” (or belt repetition). The A/C, normally worshipped in indoor areas here, seems to be on a high temperature, or is barely seeping out the vents. I find the air to be thinner the further I run on the seemingly endless circuit of my treadmill workout. Sweat accumulates everywhere, drips in my eyes, stinging. I glance at my treadmill soldier neighbors and come to the quick realization that they aren’t sweating. At all. Nor are they moving very fast in the least. Some are talking on their cell phones or examining themselves in the many mirrors as they go a few steps a minute. My next-door treadmill neighbor, who’s fiddling with his Blackberry and perhaps playing Farmville, glances over at me as though I am a very strange individual indeed. Suddenly I feel as if I really am strange, too, as in, how can I think of actually using a treadmill for running purposes? And then I feel – is embarrassed the right word – that I am actually sweating in a gym! Oh goodness!

I don’t have an iPod or an MP3 player or any music of sorts and I am training for a marathon on a treadmill. It doesn’t get much more monotonous than this. I listen to the hum of my treadmill as I try to breathe and try listen to music created from all the machines going at once. Then I get distracted by the MTV Asia that’s on several screens before me and my ADD gets the best of me. I watch the screen, uninterested, but looking for distraction. Then I start to get frustrated with what I see on the TV, and remind myself why I don’t own one.

Many young women in tiny clothes strut around on the TV and scream to be watched. I have no idea what they’re saying but I can imagine well enough. Mostly emptiness. I get so bothered by the TV that I look around me once again and come to the realization that I am surrounded by MTV here in this gym. And I am a part of it. Yet I don’t fit in these lines. Not at all.

This marathon, it’s less than 2 weeks away. It’s down south in Phuket.

Just in time for rainy season. Shall we see just how well the indoor treadmill training fares and if our team of 5 foreigners will survive? Stay tuned for post-race pictures, and we’ll see if our training methods led to success, if any. We will keep you posted.

In the meantime, happy running to those runners out there and try not to become a treadmill warrior, like me. 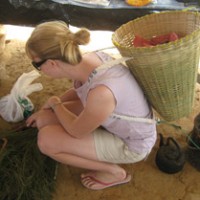 Wanderlust has driven Camille to study and work in 4 different countries and 3 continents so far. A Colorado native, she loves the outdoors, the fresh mountain air, and climbi… Read full bio