Notes From a Buddhist Traveler . . .

In the plane heading home, with plenty of time to reflect upon my trip, especially the Paris part. Most striking, was how susceptible I became to my new environment. How the forces of greed, and hate, and ignorance got unleashed, invading my consciousness under many forms. As in . . .

Being almost seduced by dresses I would never wear, at the Bon Marche. Eagerly expecting the two nougats delivered by our bed every night, and becoming attached to the luxurious linens. Getting used to being surprised with new experiences, new sights, more wonders. Agonizing over which ‘good’ restaurant to go to next. Growing bored with our favorite walk in the neighborhood, after only nine days. Rushing one last time through the aisles of the Rue de Rennes Monoprix, looking for more good deals . . . Each time, feeling the rush, real or imagined, and the envy, and the fear of not having, or no longer having, and the unsastisfactoriness repeated, over and over.

As the days passed, I grew more ill at ease, and started to blame Paris for tempting me so much. I wanted to leave, and fantasized about life in the monastery where the perfect conditions are set for practice. I hated myself for having all my human weakness exposed. No wonder, I had reacted so strongly to the two junkies that had crossed my path, one afternoon in one of the side streets by our hotel. The two were enraged, kicking and screaming at their dealer for not coming fast enough. At the time, I had felt pity for the young men, and gladness that I was not like them. Now, I see the difference between them and me is only a matter of degree. I, we are all enslaved to satisfying our senses.

I learned something else in Paris, that I cannot separate myself from the environment in which I dwell. In the monastery, the bell, the silence, the presence of others devoted to the practice of mindfulness, the Buddha images, the Dharma talks, the simple life, the structured sittings, all work to unify the mind around the single purpose of mindfulness. Similarly, at home, I have created a daily routine that supports my practice. There, I become mindful with relatively little effort. As a tourist in Paris, most of the stimuli worked in the opposite direction, towards a relaxation and a greater fragmentation of my attention. The people, the sights, the sounds, the smells, the tastes, the sensations all seeped through my skin, until I became one with the shallowness.

This latter experience, I take as a flip of Ayya Khema’s description of ‘the infinity of space’, in ‘Who Is My Self?’:

Is there in fact, total unity, rather than the seeming diversity to which we are so attracted? Are the boundaries, which seem so real, nothing but an optical illusion? From a scientific point of view, it is common knowledge that there are no solid building blocks to be found anywhere in the universe. There are only particle of energy, endlessly coming together and falling apart. We have all heard of this but tend to forget it. If, through contemplation, we come to see that this really is the way things are, we will also recognize that our boundaries can only be man-made illusion. This understanding will help us let go of our attraction to diversity.

Getting at Ayya Khema’s insight through the dark alleys off the main path, realizing the illusory nature of our separateness, of ‘I’ versus ‘them’. Not as deep as the real thing, as I imagine it to be when the mind becomes totally pure, but an approximation, a making do of life’s offering for now. 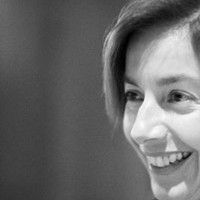