The Passion of Mel.

Did you hear the phone call recordings of Oksana Grigorieva and the assumed Mel Gibson?

I did. Yep, I listened to all five of the five currently publicized. I was surprised at my response when I heard the first recording. I was actually mortified that Oksana would calculate such a manipulative act of luring the foul-mouthed, loudly bigoted Mel into her spy work, all the while comfortably residing at his home; yet I equally understood her desire to prove his aggressive and potentially dangerous nature, as the case may be. But did she have to blast these recordings all over the world? Could these tapes have been handled in a courtroom for the proper authorities to decide appropriate judgment?

I do think so.

Granted, Mel Gibson has some serious issues with volatile ranting, but Oksana did come across with an antagonistic, passive-aggressive attitude on several of these recordings. It sounded like she cut the beginning of the first recording to hide what sounded like Mel calling her back regarding a message she left him about having trouble breast-feeding their child, Lucia (or at least that is what is sounded like.) Although I was disgusted with the escalation of tirade that Mel regressed to, I was trying to hear what he was trying so hard to say and where his pain was stemming from. His outbursts reminded me of a toddler expressing full-body anger due to a lack of properly developed communication skills.

I heard the voice of a man who felt incredibly used, was having financial problems, was feeling the pressure of his other children’s welfare, feeling utter loss, furious at himself for having spent five million dollars on Oksana, disgusted with her lack of appreciation and disappointed with who his girlfriend turned out to be. I could barely listen to all of the recording, as his rage was so hate-filled and utterly inappropriate. But I also heard a teenage boy swear at his mother in the supermarket yesterday in a similar fashion. When a “dependent” is not given what they want, and they are not equipped with proper communication skills and coping mechanisms, they can tend towards disrespectful rage and hurtfulness to deal with their uncomfortable frustration.

Several other factors also seem to come into play. Loss of security absolutely does induce serious stress. The degree of loss that one feels is equal and opposite to what one had possessed in relation to what one lost. It sounds like Mel may be stretching his once bountiful finances, while his girlfriend continues to make herself at home to what he has left; not to mention the millions he spent on her career. Since all of these were entirely his choice to do so, he should only be angry at himself. Yet, these are the makings for a crime of passion, and let’s take a look at how Mel got lured into such a situation.

In the second publicized recording, Mel sounds like he is starving for love and starving for a woman – like a drug addict for his drug. Glancing over Oksana’s life and career, it does seem that she made a transformation from a passionate, artsy, real woman with a career in music to a plastic surgery ridden wannabe with a sense of self-entitlement. Mel voiced that the latter woman is not who he wanted. Yet, he was trying to make a cow a horse – which simply is not possible. Look at Mel’s first wife. She was real, supportive, loving and private. As lovely as these qualities seem, they very likely enabled him while they were together, which ultimately contributed to the escalation of his childish demands and emotional outbursts that we see in his behaviors without her.

Unlike Mel’s first wife, Oksana used sex to entice him. He sure appears to be a victim to the sexual seduction that manipulative women have the power to use. Sexual withholding from a partner can be very painful. It is as raw of an emotional pain as one can inflict, and we hear this pain in the fourth recording. Again, Mel sounds very childish in his hunger for affection and appreciation. Like many relationships, the assumed nonverbal contract that their relationship seemed to be based on wasn’t balancing out. Mel was reimbursed for what he gave to Oksana through sexual favor. When she withheld the sex, his fury flamed out of control.

I have been a victim of domestic violence. My ex tried to dummy up a charge against me in order to take the light away from the unlawful behavior that he inflicted onto me. I know the agonizing frustration when someone is playing games with your life as a means to win – it is despicable. Like Mel, I got caught up with trying to even up the tally and amend my losses of having been taken by a sociopath. But it only brought me lower into the snake pit, and it only created more loss and pain. So, do you know what I did? I walked away. I walked away with the unjust injuries, the inaccurate blows to my reputation and utter loss. But in the end I won with my refusal to retaliate, and in the end he lost an opportunity to transform ignorance into awareness.

While I was grieving the above-mentioned situation, my therapist said something that initiated my healing process even faster. She told me that she would rather be a victim than a perpetrator. At first I was appalled, thinking that I never wanted to be a victim! But then her sentence sunk into the depth of my soul. I was proud of myself for diffusing the fury of anger within myself instead of inflicting it onto anyone else, including my ex. I was proud of myself for being able to walk away from the loss of physical possessions and personal finances in exchange for my health, happiness and personal integrity. Now, this is what Mel Gibson needs to learn. I believe that Oksana has her equal part in this tragic situation, but Mel’s lack of control perfectly feeds her manipulative tactics. It is a jackpot attraction of dysfunction.<

I really wonder what Oksana’s motivating factor is in this revelation of their personal matters. Since she and Mel are in a custody battle for their child, I wonder if she is pulling tricks as her means to influence getting sole custody? Is she making up the claims of battery? Is she dummying photos, dental reports and manipulating his telephone rants in order to make a case for full custody of their child, not to mention pushing the buttons of an already emotionally unstable man? Or did Mel go so far over the deep end that he succumbed to such hideous behaviors?

I am sure that we will find out more. Similar to the Tiger Woods scandal, each day seems to reveal a little bit more. We get the picture well enough. We can only hope that all parties can salvage a way out of this gross destruction; emerging wise, emotional sate, and striving to provide a nurturing upbringing for their daughter, Lucia.

Is there any irony that her name means, “Born into Light?” 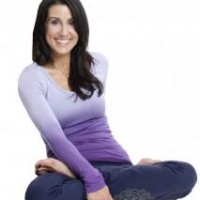 Alanna Zabel is the founder of AZIAM Yoga. She is passionate about spirituality, health, wellness and fitness. In addition to her Ashtanga, Iyengar and Chopra Yoga certificati… Read full bio