In Transit: Remembering to Breathe.

Practicing Yoga in the Chaos of NYC.

I spent the past week visiting friends and family in New York. It was more or less a reconnaissance mission. I was gathering sensory data as it applies to the question, could I live in New York City?

I am leaving Portland, Oregon at the end of August and plan to arrive in New York on September 5th, after two weeks of road tripping through California, the Southwest, the Deep South, and the Southeast. I’ve considered moving to Brooklyn, like thousands of other creative, underemployed college graduates who want to be at the center of all things arts-related. So I decided to feel it out.

I moved around the city like a mule, carrying an enormous backpack, a yoga mat (conveniently strapped to the backpack), and a canvas tote bag stuffed to capacity. It was sweltering hot, crowded, smelly, noisy, and hyperactive. With all of my baggage, I took up more space than I think you are legally allowed in a place like Manhattan. I was highly aware of whether or not I was infringing upon other people’s personal space, and I found myself taking measures to create a sort of protective barrier around myself and my things. Feeling defensive isn’t something I enjoy, and this defensive impulse was compounded by my guilt at having felt it in the first place. That’s not very yogic, I thought. You aren’t being receptive.

As a matter of fact, I think my defensiveness was a result of my being overly receptive to the energies surrounding me. It felt like everyone around me was giving off intense, if not aggressive, vibes. This kind of sensitivity makes life easier in some places. In New York, being emotionally or energetically sensitive seems a bit dangerous.

The only way I could remain steady was by focusing on my breath. The most basic, and yet most important, aspect of the yoga practice is this very meditation: to focus on the inhalation and exhalation, continuously. In New York, a living example of virtual chaos that is somehow bound by an elusive organizing principle, it’s easy to get caught up and forget this essential element of equanimity.

I was able to enjoy brief moments of calm in Bryant Park, in yoga class, at my aunt and uncle’s apartment on 80th and West End, and in the homes of friends. But while in transit from place to place, I often lost track of my breath. Surprisingly, I found that standing in a ninety degree subway station can actually force you to reconnect with the breath. I remember thinking, breathing deeply is the only way I will get through this. As I shifted my perception of this circumstance just slightly, I saw that this mundane experience of waiting and sweating was actually a perfect opportunity to meditate on the simple rhythm of my chest rising and falling. Instead of feeling like the wait was taking forever, I set those five minutes within the framework of time itself, and realized, happily, that this period of expectancy was merely a blip, and that my momentary discomfort was really inconsequential.

Opportunities for growth are often disguised by situations that appear confusing, unpleasant and painful. Much like a vigorous asana sequence, everyday life can make you want to give up, sit down, lie down, and refuse to move forward. But it is only through mindfulness and the practice of dharana that we can learn how to reorient ourselves to these moments of difficulty or discomfort. We all have our limitations, whether physical, emotional or psychological, and the gradual transcendence of these limitations is possible the more we are aware of where they lie. Of course, it is always miraculous to find out how illusory one’s limitations actually are.

Breathing, moving, seeking stillness, and meeting limitations head-on – this is what defines yoga for me. Throughout my New York excursion, I found myself thinking, I can’t go further. It happened on the street, on the subway platform, and at the airport. It happened during Barbara Verrochi’s vinyasa class at The Shala Yoga House on Broadway near Union Square, as she eased me down into a very narrow, well-aligned parshvottanasana. Yet it is precisely these instances of resistance that provide the greatest insight into who we truly are and what we are capable of. The most valuable off-the-mat lessons are the ones that show you other people’s kindness and generosity, and inspire you to go further in every respect. Once you connect to the breath and clarify your perception, anything seems possible, and strange little convergences occur.

One encounter in particular illustrates, for me, how we are always moving within an ever-expanding network of relationships.
I was battling with a Metro-Card machine somewhere in Brooklyn. An MTA employee, a young Indian man, came over to assist me. He pointed to the book in my hand. “Guruji,” he said. “That’s an Indian word. Do you know Hindi?” “No,” I said, “this is a book about the guru of Ashtanga yoga.” “Ah, yoga,” he said, smiling. He asked me, “Do you know what Guruji means?” “Teacher,” I replied. “The ji denotes respect.” He nodded. “Very good.” He showed me how to fix my Metro-Card problem with the press of a few buttons. He handed me my pass and grinned. “Now I’m your guru,” he laughed, gesturing towards the machine.

Sure, it was his job to help me. But isn’t that just a formality? I feel as though people are helping me every day, whether they know it or not. There are many helpful, friendly, patient folks in New York, more than I expected. And in some way, these people are my teachers, however briefly. In even the most overwhelming mosh pit of humanity, there are teachers, and teachings, peeking out from behind the hustle and bustle. People are willing to be of service to one another, and sometimes it’s just about recognizing what constitutes service. This young man was only one in a number of people who helped me during my frenetic travels in New York. There are millions of people trying to get to where they are going – and pushing and shoving to get there – but if you’re lucky, there are also many people who are willing to help you, in ways both practical and metaphysical.

At the end of the day, whether or not I end up living in New York isn’t really the question. The question always ends up being, if I am committed to practicing the eight limbs of yoga, can I live these principles every day, no matter where I am or who I am with? Can I live according to the yamas and niyamas when I’m tired, hungry, claustrophobic, confused, hurt, angry? Can I be less reactive? Can I perceive a situation with clarity and equanimity in the moment as opposed to in retrospect? And can I truly perceive all the beauty and kindness that is offered to me, even when I am feeling far from beautiful and kind?

The answers to these questions, I do believe, lie beneath daily, seemingly mundane interactions with people like the MTA employee, the children I nanny for, and the individuals I love but have trouble communicating with. There are no limits to the yoga practice, no boundaries, no exceptions. There is only you and your own limitations, and the many characters who pop in now and again to coax you, mischievously, towards the light. 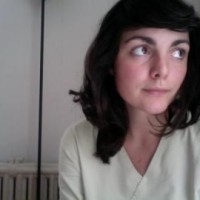