It is said that women in their early 30’s are in their sexual peak – open, uninhibited, secure and comfortable. I’m sure there is some very convincing evidence to support that claim, and, from personal experience, I would concur with the age parameters; however, my switch was flipped by more of a psychological shift, not just physiological.

I found my sexy when I became open to accepting myself, independent of external influence.

Too often self-acceptance is limited by a compulsion to compare and judge appearance, intellect, or character to another. By doing this, loving-kindness towards one’s self is inhibited which also impedes the cultivation of loving-kindness outward.

Every person has a unique sexy which has nothing at all to do with physical appearance. Bodies are merely vehicles for this lifetime which physically interact with the world, both sexually and non-sexually. Self-acceptance, self-esteem, and a healthy self-image comes only from compassionate factors within. External factors have no true bearing on the self view; however those elements have the ability to do a significant amount of superficial damage, but only if granted the power.

Society fosters this notion that self-acceptance stems from having the right clothes, the perfect body, a successful job, the right image, etc, thus it seems much easier to blame others, most commonly the media, for shortcomings in personal growth. Willingly, many people allow these external factors to cloud their self-image while pointing fingers to shift the blame.

By shifting the blame outward and not focusing on fostering a healthy self-acceptance at the internal core, power is then granted to external, uncontrollable factors—a losing battle.

By ignoring that the root of true self-acceptance lies within, and by focusing time and attention on these perceived external influences, a monster is created, planting the seeds of low self-esteem, victimization and/or degradation.

For example, the ideology that a ‘sexy’ portrayal of women in the media is exploitation— being the cause of eating disorders, sexual promiscuity, and poor self-image. Advertisers know, without a shadow of a doubt, that sex sells, so it’s not surprising that this tactic is used and will continue to be used.

As with any art form, what could be viewed as offensive, ‘dirty’ or degrading to one person could be pleasing, tasteful, and empowering to another. It all comes down to aesthetics.

There is a belief that a woman’s form should be only represented in a very specific way (tasteful), to elicit a very distinct reaction (beauty). As both the expression of ‘tasteful’ and ‘beauty’ are highly subjective. It is the negative perspectives on these subjective expressions that are imposing a victimized attitude the minds of women and young girls, not the ads themselves; implying that one ‘should’ feel degraded by seeing a woman in a bikini.

Repressive repercussion will result from that view…

Because we are threatened by that woman in the bikini?

Because women’s bodies should not be viewed in that fashion?

Because women should be embarrassed of their bodies?

Because it is wrong to own our sexy?

If a model chooses to ‘objectify’ herself for an advertisement, a good cause, or merely for the sake of art, that is solely her choice. She doesn’t represent me, my mother, my children or any other woman.

Why empower the media with the ability to make you feel vulnerable?

We have a personal responsibility to take control of the perspective and view we have of ourselves. No one else holds that authority over another person unless that control is willingly relinquished.

I am from the camp that no one has the authority to affect me mentally without my consent. I cannot regulate the actions of others but I can control my reaction, the value or weight I give to those actions, and the lessons I take away from the experience.

Control is limited to our own actions and view.

People may have the intention to insult, embarrass, degrade, or victimize another, however, these are types of exchanges. Exchanges involve the active participation of two parties.  In order for that intention to have an impact, if must be granted the power to influence.

As a different perspective, instead of stirring up clouds of negativity, fighting to censor an expression that does not resonate personally, drawing more attention to and granting more power to aspects in life which are disagreeable… explore within. Find the root of the discontent and either come to peace with a difference in aesthetics or resolve the issue at the core.

“To conquer oneself is a greater victory than to conquer thousands in a battle.”

Finding one’s sexy has everything to do with being open and accepting of the self completely independent of external influences. Of course it’s not easy, personal responsibility never is. It is all too simple to blame others than to take control of one’s self. Accept and acknowledge where the authority resides and where that power should be focused. It is a beautiful, empowering, compassionate, and liberating self-realization.

You can search outside of yourself for stimulus, beauty, musings, inspiration, and wonder, but it is from seeking within that grants these external components with meaning and the power. Be mindful of that control and where the energy is directed.

May we all become open to accepting our own extraordinary sexy from the understanding that it resides unwavering, uninhibited and unmatched within each of us. 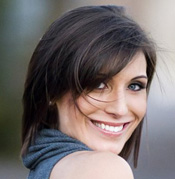 Jennifer K. Jones is the owner of a multi-media marketing firm, yoga instructor and practitioner, holistic health practitioner, writer and artist. She is the mother of three i… Read full bio