The Trouble with a Vegan Wedding (isn’t the food).

When my fiancé and I started discussing wedding plans, the first order of business was simple. Seeing that we would not serve meat to guests in our home, we would not do so on the day we were married.

Neither of us rage against carnivores, but being that we are both educators—myself as a journalist and yoga instructor, Erica studying to be a clinical nutritionist—we looked forward to the opportunity to show a few hundred of our favorite people just how good a meatless meal can be. Considering that humans consume roughly 1,000 meals a year, we figured there wouldn’t be any problem with our vegetarian wedding.

With the wedding a year away, we were fortunate enough to have the press on our side. Recently, the NY Times featured a story on vegetarians and weddings, using my Erica as an example of one that will not serve meat. Tons of phone calls, emails and Facebook comments appeared after that Sunday story, expressing a range of opinions. The one I want to tackle here is the same that came to mind after we first decided to go meatless.

Why are people so emotional about food?

Step back from the politics and social issues, from the pomp and circumstance of the ceremony. There we were, freshly engaged and happy…and the opposition was immediate. I couldn’t wrap my head around it. Then I started musing over the reasons, which are understandable.

Part of it is generational. Not so long ago an American status symbol was putting meat on the table. It represented the fact that your career and family were doing well. This is similar to the mindset that Michael Pollan noted in regards to a survey in which many Europeans respond to the question, “When are you finished eating?” by saying “When I’m full.” Only in America was the #1 response “When my plate is empty.” This World War II mentality has stuck, given that the Journal for the American Medical Association states that roughly two-thirds of Americans are overweight or obese. We have to turn to the enormous amounts of meat and sugar we consume to understand why this is so.

Truth is, we’re a different generation, which leads to the second misapprehension: that we’re going to serve tofu and, as is popular with the press, “tree bark.” Both Erica and I cook often, just as we both try out new restaurants as much as possible. While the tofu/tree bark reference may be cute and trendy, it’s also lazy—there is so much good food to eat it astounds me. Modern cuisine, and vegetarian cuisine in particular, is nutritious, inventive and delicious. While I’m sure there are imaginative meals being created with meat, most often I find my friends just settle with whatever is being fried or baked. Unfortunately “settling” is a life philosophy as well, one that I intended not to live some time ago.

Then you have the plain old emotional attachment to meat. What we eat consumes us, as Brian Wansink pointed out in Mindless Eating. Most of the time we’re not even cognizant of what we’re putting inside of our bodies, so accustomed to our habits do we become. The foods we eat become part of us, so it makes sense that we don’t want to let them go. That we should be denied of this sensory pleasure overrules the wishes of the people that invited you. Humans are vigilant and ruthless in our pursuit of desires, however well intentioned we may appear. That eating is such an emotional act should not surprise; that we have so much trouble imagining another way of existence simply confounds us. Being human, we criticize and belittle what we do not understand.

And then there’s Mike. As life has it, one of my closest friends and creative partners also runs a blog called Porkalicious (which is in serious need of an update). Dude can cook and bake the hell out of anything—but pig is his thing. His long-term goal is to own a specialty hog farm; last week he was showing me business and pricing plans for the $70-a-pound pigs he would raise. When I told him that a future goal of ours is to have a small farm in the Hudson Valley, and that we would have plenty of animals—cows for milk, sheep for cheese, chickens for eggs, alpaca for wool—he was pleased…until I told them we would not eventually eat them (or sell their meat). Then I dropped the big one: We will have a pig.

Wasteful, he called me, and continued to thumb through classified ads for luxury Wilburs.

But even Mike understood that our wedding is our day. Ironically, the NY Times comment that a wedding is not about the bride and groom is the one I most disagree with. As Erica likes to point out, regarding criticism that we’re not giving meat eaters options, it is us that never have a choice. Most weddings consist of: beef, chicken or fish. Oh, what’s that? Vegewhat? Well, what do we have left that we can throw on a plate? Tofu and tree bark? Perfect!

Traditions are only powerful if they serve the society you live in. Too many are outdated and in need of a facelift. You cannot serve a tradition just because “that’s the way it is”—whether it’s fox hunting or what. So while I had to concede to mailed invites as part of the wedding process (instead of email, which saves paper), the one thing we both would not settle on was serving meat.

Fortunately for us, her family may not have been initially thrilled with our decision, but after a few honest conversations, they now support our decision (my Russian-Hungarian-Polish family has long given up on trying to understand what or how I eat; they’re just happy I’m getting married.) I feel bad for those who do not have that sort of support system, and so instead of helping create new traditions, settle for what’s demanded of them.

As one friend likes to say, if you don’t stand for something, you fall for everything. 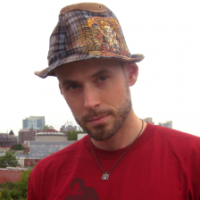