Yoga to End All Dog Wars. (Part One)

When I work with an aggressive dog, I don’t focus on the aggression and how to “cure” it.  This approach can be perplexing to people who ask “why” and then answer the question with all sorts of human rationale:  “my dog doesn’t like white dogs” – “because their former owner used to hit them” – “you would too if someone put their nose in your butt”.  You’d be tempted to try giving your dog a treat whenever a white dog came around, hang on to anger about your dog’s former owners, and keep other dogs’ noses away from your dog’s butt.  And while you might (or might not) see the aggression again, you wouldn’t be taking care of the real problem.

Aggression is merely a symptom of a simple problem – the dog is experiencing more energy in that moment, with that other dog, than their emotional nervous system can handle.  And when a dog experiences too much emotion for their circuitry, their system gets overloaded and needs a rapid discharge.  That can look like aggression.  It can also look like a puddle of piss on the floor.  So I don’t worry about why Sparky thinks that innocent little poodle coming towards us on the sidewalk is worthy of becoming dinner – I simply notice and say to myself too much energy.

Once you’ve changed your focus from the aggression to the underlying cause of the aggression (too much energy), you can start actually changing the experience of your dog in those moments.

When we’re walking around and we encounter a person we know, it’s totally normal for us to stop in our tracks and talk, at relatively close proximity, exchanging information through our words.  And our body language.  Even if it’s not someone we know, our words give us a way to negotiate the information being communicated back and forth.

Dogs, on the other hand, need movement in order to communicate effectively.

As two dogs approach each other, the emotional energy between them rapidly intensifies.  If two dogs can’t figure out a way to deal with that intensity (and one, or both of them, is aggressive) then sparks will probably fly.  Even though all the signs of increasing energy and tension are there (quick wags of the tail, fur standing on end, gradual slowing of movement), it’s common for people to assume that dogs can navigate the face-to-face meet-and-greet just as well as we humans do.  Most likely, they can’t.

When lots of emotions are flowing, there are two important things that you can do to help your dog:

Give your dog something to do with that energy. Millions of years of evolution (or some crafty design of our creator – or both) have given dogs a surefire mechanism for releasing energy and stress.  If you give a dog something to chase, something to bite, then they can release the tension building up inside of them.  While I have formal exercises that I teach people for this very purpose, an easy thing you can do is to simply have two tug toys handy and engage your dog in some tug-of-war when signs of emotional tension are present.  Let your dog win each round of tug, and use your second tug toy to keep your dog engaged in the game.  Your dog will drop toy #1 to get toy #2 – at which point you can pick up toy #1.  And repeat.

Increase your dog’s capacity for handling that energy. This is where the yoga comes in.  Your dog needs to physically relax in order to experience more emotional flow.  The best way to do this when meeting another dog is to eschew the face-to-face encounter, and instead WALK WITH THAT OTHER DOG for several blocks, with each dog alternating their position in front, until they’ve each had a chance to sniff each other’s posterior a few times.  As each dog eliminates (aka pees or poops), the other dog should be allowed in to sniff what’s been deposited.

You can also take breaks from the walk to give your dog a relaxing massage – using touch that helps your dog settle (i.e. ensure that your touch isn’t actually stimulating your dog more).  Think of yourself as your dog’s massage therapist, where your goal is to soften your dog physically.  The more physically supple your dog is, the more emotionally supple your dog will also be.

The walk together gives the dogs a sense of common purpose.  Plus, it replaces the static energy of the head-on meeting with the dynamic ebb and flow of a walk together – again, giving that emotional intensity a way to work itself out.  And the sniffing is perhaps the most important way that dogs have of communicating with each other.  After all, they don’t have witty repartee to break the ice.

If you decide to give the dogs some time for “free play” – I would do this only after one of the dog starts doing play bows.  It’s a good idea to limit the play time, as there’s potential for the play to get too intense (and escalate into something less playful).  Your best bet is to allow for some playfulness, and then play some tug with your dog to release any stress, tension, or excess energy.  At that point you can continue your walk with the other dog, or just go on your merry way.

And when they’ve already decided that they hate each other…?

All of this advice works great for dogs who don’t know each other, or who barely know each other.  It also can help in instances when two dogs already have a tendency towards mutual aggression.  But what do you do when it seems all two dogs want to do is fight?  Stay tuned for my next article, where we’ll go over some advanced doggie yoga to help your dogs flow in even the most seemingly extreme of circumstances. 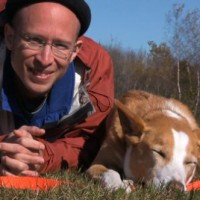