A Conversation: the Living Tradition of Tantra.

Emma: Hey Bern, did you read that EJ blog on Tantra and Walt Whitman? I appreciate Horton’s talented writing, but I found her view of Tantra limited.

Bernadette: I did read the article, and I think her article offers a great opportunity to clarify what Tantra is, and why Anusara yogins self-identify as tantrikas.

Emma: Truly! Tantra is a vast tapestry of esoteric philosophy and practice, and has meant different things to different people during its complex, 2,000-year history.

[ed’s note: this discussion of tantra does not appear to include Buddhist tantra or Vajrayana tradition or lineage, which was the focus of my personal comment in support of Carol Horton’s original article. I also discussed this issue in some depth with John Friend personally in LA this month—it was a fun and informative conversation.]

Having taught Anusara yoga for 10 years, we both know that Tantra cannot be reduced to three practices from one particular epoch and location, as Horton writes in her article. Anusara yogis don’t hang out in cremation grounds, but we seek to embody Tantric philosophy, orient ourselves around Tantric texts, and perform Tantric practices. We follow many of Tantra’s fundamental principles, but adapt them to modern Western society.

Bernadette: Let’s start by defining Tantra: it’s a technology for expansion of Spirit. Tantra uses the manifest world as a means to experience Enlightenment. Unlike other yoga philosophies, Tantric Enlightenment doesn’t transcend the everyday world; it points us back to it, in a more joyful, appreciative way.

Although yoga and Tantra are living, ever-evolving traditions, there are key distinguishing principles of Tantric philosophy that transcend historical, cultural, and religious parameters. For example: tantrikas identify everything, absolutely everything, as Supreme Consciousness and Creative Power—including body, mind and Spirit.

Anusara yoga’s Shiva-Shakti Tantra philosophy is easily identifiable as Tantric. We teach that Spirit is Good, Free, Full, Pulsating, All-Knowing and Blissful.  We teach that yoga is a practice that celebrates this Supreme Spirit as it manifests in ourselves and the world around us. We teach that humans have the common desire to experience the freedom of our true nature. We teach that through skillful action, we can reflect upon and joyfully recognize who we really are, who we always have been and what we may yet become.

In this way, Anusara yoga holds a tradition that has been around for thousands of years, yet is still as relevant and applicable today in our 21st century as it was at its inception. John Friend didn’t invent these ideas:  he learned them over a lifetime of study and practice.  No matter how much we like Walt Whitman, we can’t attribute the origination of these ideas to him, either.

Emma: Which begs the question, what is the origin of these ideas? Fortunately, John Friend has always encouraged Anusara yoga teachers to study with experts. We’re blessed to have scholars in our community (like Douglas Brooks and Paul Muller-Ortega, to name two) who are grounded in Western academia, yet informed by serious, life-long sadhana, or spiritual practice.

Because of our studies, we are able to answer questions about the roots and history of Tantra in its full spectrum. We’re better able to honor our past, live fully in the present, and serve the future. Because of our studies, we know we’re participating in and co-creating a rich tradition, rather than randomly making up ideas and calling them Tantric because it’s exotic.

Historically, Tantra emerged from a rich environment of Shiva worshippers (some of whom were known as “Kapalikas”) who were originally active in the 2nd – 5th century CE. These early “Shaivites” courted disapproval through outrageous behavior. They practiced in cremation grounds, where the veil between life and death was thinnest, and believed that violation of conventions brought them closer to the incomprehensible heart of the Divine.

Tantra then evolved in a number of different directions. In the south, a philosophy called “Sri Vidya” began to coalesce around the 8th century. A little later, Northern India saw the flowering of a form of Tantra called “Kashmir Shaivism.” At some point, in certain circles, the highly unorthodox nature of early, proto-Tantra went through a rehabilitation. External, more transgressive practices were refined and translated into internal rituals of meditation.

Some scholars refer to more socially acceptable forms of Tantra as “right-handed”, and more transgressive forms as “left-handed”. The convention-shattering, “left-handed” practices have given Tantra a reputation for black magic that persists even in modern-day India. However, the “left-handed” path is just one aspect of Tantra—it is extremely limiting to evaluate all of Tantric philosophy according to the behavior of one group at one point in time. You don’t have to hang out in cremation grounds to be tantrika!

Anusara yoga doesn’t generally identify with “left-handed” Tantra. However, there are aspects of Anusara yoga that are unconventional, even by the lights of the yoga community. Our Shiva Shakti Tantra considers the manifest world to be a blessing. We radically affirm life’s fundamental value by looking for the good first. We acknowledge and integrate life’s darkness by honoring the full spectrum of experience. We cultivate a wild creative freedom by playing and expanding the edge. These are not necessarily the predominant values of our society. Like our forebears, Anusara yoga is willing to explore unconventionality. We just don’t do it by smearing ourselves with ashes.

Bernadette: That’s Anusara philosophy, but not all modern yogas hold the same ideas to be true! Pigeonholing all traditions in the same category does a disservice to the marvelous diversity of modern yoga. It’s simply inaccurate to say all modern yoga philosophy is Tantric.

For example, the Advaita Vedanta tradition teaches that the manifest world we can see, touch, and experience is an illusory distraction from the fundamental Unity of the universe. The Classical yoga tradition considers the manifest world to be a very real yogic obstacle, a minefield of attachments and aversions that distracts us from eternal Spirit.

This is very different from the Tantric point of view, but when Anusara yoginis study the history of yoga, we study Advaita Vedanta and Classical Yoga, too. As tantrikas, we approach our selves, our world, and our practice differently, yet we readily acknowledge that we are indebted to many traditions. Tantra’s conversational partners have played significant roles in evolving the modern dialogue of yoga:  you and I couldn’t be having this conversation, today, had other traditions not had it first.

Anusara yoga honors our shared history, and the genuine diversity of the great ocean of yoga traditions. We know we stand on the shoulders of giants! Embodying these living teachings in the present, rather than embalming them, we carry the conversation of yoga forward into the future.

Emma: Well, Bern, it’s been divine having this conversation with you.

Emma Magenta and Bernadette Birney both teach within an hour of New York City and sometimes share a brain. They love talking about yoga and welcome feedback.  You can find more of their writing at Emma Magenta’s blog and Bernadetta Birmey’s blog. 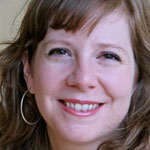 Emma Magenta is a yoga teacher and writer living in New Jersey. She grew up on a sheep farm in Kansas and attended Bryn Mawr College. She owns and operates South Mountain Yoga… Read full bio