Los Angeles: A Place of Community, Integrity, Innovation and Quality

The Greater Los Angeles area has much to offer in terms of green businesses, innovative thought and networking events geared towards raising consciousness and promoting sustainability. On Friday, Febrary 12th, I had the privilege of attending a green business discussion panel at the “8th Annual Conscious Life Expo” in Los Angeles, CA. It was called “Creating A Thriving Green Economy for Greater LA”. This panel featured six of Los Angeles and Santa Monica’s prominant green business leaders.

After taking the Metrolink up from Orange County, hopping on a bus and getting and taking a walk, with suitcase-on-wheels in tow, I finally arrived at the LAX Hilton. I found my way to the room where the discussion was to take place,
said a quick hello to the panelists that I knew, was asked by Greg (the moderator) to take some pictures with his camera, and got settled.

Shortly after, a woman named Sherry got up and announced to the audience that she wanted to start an e-mail list for all those interested in hearing more about current happenings in the L.A. green scene. The panelists got behind the idea and we gathered resources to put together an impromptu e-mail list.

When all the panelists had gotten settled in, Greg introduced himself and the others to the audience. He asked each panelist to give some background information as to why sustainability is important to them and their reasons for being involved in the green business movement. He mentioned that there are ten green business groups in Los Angeles, six of which were represented on the panel.

Susy Borlido grew up in a family where sustainability was a part of life and feels strongly that one person can make a difference. As the Director of the Business Greening Program for Sustainable Works, Susy heads the student greening program at Santa Monica College and she educates students, residents, businesses and communities through her program.

Jennifer Gooding said that green business is what kept her in Los Angeles when she would have otherwise moved away due to cultural preferences. Jen got her start in animal welfare and was asked to start the Los Angeles chapter of Eco Tuesday, a “sustainable business leader’s networking forum”. Jen now coordinates monthly networking events for Eco Tuesday that feature a speaker each time and promote interaction and involvement by all attendees.

Ferris Kawar is involved with Green Business Network and co-creator of Greenopia, an innovative and unbiased (no advertising) guide to green business in Los Angeles, San Francisco and other key cities around the United States. He helped create this resource so people can easily find listings for sustainable restaurants, coffee houses, cabbies, and more. Greenopia makes it so “people don’t have to put in time to research” these things. The listings are readily available in either booklet form or on-line.

Rob Kramer is a member of the Sustainable Business Council of L.A. He leads the SBC Forum, where 15 to 25 sustainable business executives meet for lunch, once every three months. His focus is sustainability for profit. Rob got involved in green business when he saw a need for the prevention of water bourne diseases. He took an entrepreneurial approach to the matter and was quite successful. He spoke of “need, speed and greed for good” and “motivating self-interest”.

Jennifer Reagan leads the Downtown Chapter of L.A. Green Drinks, “a casual networking space” which is the only group (of the ten mentioned) with multiple locations under one moniker. There are “Green Drinks” events in many different areas of Los Angeles and 8 organizers, altogether. It is purposefully unstructured to allow for an “organic” and relaxed setting. She also manages the Sustainability Programs for AEG, a leader in coverage for the sports and entertainment industries.

Greg Wendt, the moderator of this panel, is a certified financial planner. Along with Scott Wilson Badenoch Jr., Greg founded the Green Business Network when he saw a need for leadership within his local community. Starting out, in college, Greg wanted to “change the world and apply his intelligence in a way that could make a livelihood (for him)”, so he chose to study economics. Greg brings a uniquely spiritual and holistic approach to leadership, green business and community activism.

Q: “How do you get the clients to care about the changes?”

A: Ask yourself what sold them on you? Get into their networks. Find your target “non-green” people.

Q: “How can I make a profit AND make a difference?”

A: “If they’re a customer who loves the store, ask them to invest in the store.” -Greg Wendt

“Connect and act from your authentic place”.
“Every person and every encounter has something to offer”. -Greg Wendt

“Don’t lose sight of the difference you’re making (and) don’t focus on the stuff you can’t accomplish…don’t reinvent the wheel, improve the wheel”. -Jen Gooding

“If no one else is freaked out, it must not be that bad”, “put pressure on the media…this movement needs to get around the media” and “we don’t have an environmental problem, we have a human problem”. -Ferris Kawar

I now understand why this panel was at the Conscious Life Expo. It’s not just about “going green”, buying organic, playing follow the leader, or doing it because you think you should. This is really about community, local and global. After all, it’s not the planet that we need to save. The Earth would go on just fine without us. It’s the people and the eco-system that we are saving by being evermore conscious with our thoughts, actions and the integral role that we each play, as individuals and as members of communities. As Ghandi said “we must be the change we wish to see in the world”. Each of these community leaders have taken that response-ability on in their own unique way and are leading by example.

As for my involvement, I came to Southern California from San Francisco in October of 2008. Having taken part in the green business industry since 2005, I was pleased to discover a thriving green business scene in Los Angeles. I have personally attended Green Business Networking events, worked at Eco Gift Festival in Santa Monica, explored the Los Angeles green business scene and found much value in the connections that I have made by doing so. In fact, my writing and journalism ventures all began with Eco Gift Festival in December of 2008.

So, one event, one person within a community of like-minded souls that bind together, can make a difference. One thing I loved about this discussion was the audience participation and the feeling that we are all striving towards a common goal and that our synergistic efforts will be rewarded.

I’m so glad that I was able to attend this enlightening lecture, presented by friends, old and new. I look forward to getting evermore involved in the green business scene in Los Angeles and continuing to make a difference in the communities, local and global. I know that others in the audience were inspired, as well, to take action. I’m confident that under the direction of leaders and visionaries such as these six fine panelists, anything is possible. 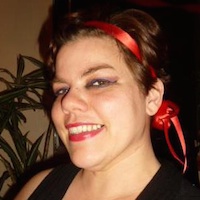