How long have you practiced yoga? I began in 1991 and was consistent for one year. In my adult life, I have been consistent since 1998.

How long have you been teaching yoga? Since 2000.

How did your yoga journey begin? My mom. She’s been a practitioner for 40 years. She practiced while I was in her womb. She’s been a teacher for 12 years.

Why do you practice yoga? For many reasons including health – I grew up with asthma and bronchitis and wasn’t strong naturally. It’s been transformational to build strength and to cure joint pains. Yoga is also a beautiful spiritual practice – meditation in action. I feel like I’m living my dharma when I practice and teach.

What is your regular practice? I take it day by day. I’ve added more meditation in the last few years. My practice consists mainly of asanas and pranayams, and I practice the asanas I’m not good at as much or more than the poses I’m good at.

Yogi Diet? Vegan Diet. I try to flow with the seasons and eat according to ayurveda.

Weakest Asana? Butterfly – baddha konasana – but its getting better.

Strongest Asana? That’s a good question. Depends on how warm the weather is I guess! Probably handstand.

What do you focus on in your classes? I do specialty workshops with all different kinds of focus. In 2008, I did a year-long ayurveda program and since then I try to teach according to the time of day and time of year.

Nude yoga? By myself, occasionally. After a shower, often dog pose against the wall.

Any religious affiliations? Grew up jewish. Had a bar mitsvha. And actually getting involved in kirtan recently has inspired me to go back to the temple to hear the hebrew chanting – its really beautiful!

How does yoga work with the ego? Ideally, it dissolves the ego, but in asana practice its a delicate balance between believing in yourself – having lots of confidence – and increasing the ego.

What else are you into? The mountains. I love wilderness and natural bodies of water. I very much have a passion for hiking and bicycling. And from 18-26, I was a competitive road cyclist.

Favorite yogic philosophy? I think in the Gita it says “effort should be neither too little nor too much.” I like that.

Last thing you did to make the world a better place? I would say getting up early this morning, doing my practice for an hour, then teaching a class in San Jose.

How do you live yoga? When I can I try to ride my bike to classes – the most I’ve ever commuted has been 65 miles in a day to teach four classes. Regular practice and self observation. Garden diet. Occasional community service. Occasional donation-based classes.

What is yoga? This interaction is a good example of yoga. And smiles, good food, union. And so many things, it’s universal. And its unique to each unique individual. What I think of in Hatha Yoga – asana practice – is balance of the opposites. Sun, moon, strength, flexibility, inhale, exhale. And that combines with the effort in yoga should neither be too little nor too much. I’m still very much in my process in getting it all down.

Tell us about TriYoga? A method of flow that was founded by Kali Ray that involves wave-like spinal movements. There’s seven levels of practice as well as a basics level and each level represents the corresponding chakra and element.

Who is Kali Ray? She is a practitioner who was initially interested in philosophy and meditation at a young age. And she started to have kundalini experiences that moved her body through asana, and that was on January 5th, 1980. She has based her teaching on this. I’ve known her for 22 years and she is a very loving and fun-loving teacher but I believe she also does the necessary work to help students let go of the ego. And she and I get along really well.

Is she from Santa Cruz? She is from Kentucky.

Did she study asana before she had the kundalini awakenings? She only studied philosophy and meditation. Her guru, Swamiji, he’s a Nada Yogi, a master musician.

Drop-back into wheel led by Kaliji.

How do we create yoga community? In a perfect world it would be yoga in the schools. Doing the practice regularly in public or alone. And offering the teachings is very simple, but necessary. Yoga gatherings, events, potlucks with music are great ways.

What is spiritual practice? The simplest answer is being good to others as well as yourself. And aiming to learn lessons from difficult times and negative experiences.

How do you feel about yoga as a profession? I think to be a teacher is a distinct privilege and responsibility. For me it’s been the highest blessing and the most fun while also presenting many different challenges in many different ways. Making a living as a teacher is also a challenge and yet the less expectations I have and the more open I am to abundance the more I can overcome fear of struggling and have abundance flow. And like the ocean it ebbs and flows. But after almost ten years of teaching I am finally open to being taken care of by the universe. I may live off dahl and rice, but I know I’ll never starve.

Check out a video of Gabriel pushing up into handstand.

And here’s a video of Gabriel’s mala of wheel pose, an offering to his teacher Kali Ray. 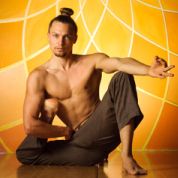