The Sweetness of Separation.

Live from ISE2: Conflict as Love.

Throughout this week at the Integral Spiritual Experience 2, we’re exploring love in a particular way. We’re imagining desire as one with the very force of evolution, which also and simultaneously evolves, itself. Throughout its unfolding out of and into and through itself, love moves through three predictable stages or flavors: 1. falling in love; 2. separation and conflict; 3. sweetness or the reintegration and reunification which transcends and includes both the original sweetness and the differentiation. These flavors are universal in every manifestation of love, from romantic to filial to the love which moves the very spheres in the heavens. (If you wanna go there, that is. If not—stick with romance; it’ll do just fine.)

Yesterday’s keynotes and practice sessions centered around the first stage, that beautiful and gooey flavor of love where everything’s just incomparably and thrillingly perfect. Today’s centered around the second stage, where your beloved starts leaving the toilet seat up, your church becomes stifling, you start choking on a now soured spirituality, once so easy to swallow.

The heart of this morning’s practice was a juicy panel discussion on this stage of conflict and separation. Each member of the panel a powerful teacher in their own rite, the combustion of different lineages was profoundly illuminating: Joanne Hunt, co-founder of Integral Coaching Canada and a sassy firecracker of Integral theory; Father David McCallum, a scholar of human development and Jesuit (not a Jedi, as he lamented); Jeff Salzman, former president of Integral Institute and currently the lead teacher at Boulder Integral; Sofia Diaz, hatha yoga master of the Balasaraswati lineage and general rockstar; Michael Mugaku Zimmerman, former chief justice of the Utah Supreme Court and dharma successor of Genpo Roshi; and finally the infinitely graceful boddhisattva herself, Diane Musho Hamilton, close student of Ken Wilber, dharma successor of Genpo Roshi, and core founder of iEvolve.

They all sat on a big white couch together and talked about pain, loss, and separation in spiritual practice. It was wild.

Fr. David McCallum began by reminding us that separation, differentiation, is the movement of our evolution; if we don’t embrace it, we’re moving away from our own growth. The process of waking up is that very “emerging from embededness” in which our self-authoring identity becomes clear, conventionality can be released. Our freedom and requires disidentification; agency requires perspective on something which becomes “other.” As Keegan, the great pioneer of development studies so elegantly put, “what the eye can see more clearly, the heart can feel more deeply.” So when we can differentiate from and see the other, we actually open and expand our hearts.

This expansion isn’t just about our interpersonal relationships, but also the development of our morals: by releasing ethical codes that were merely habitual, we can (if we don’t mistakenly regress instead of transcend) adopt a deeper ethos. The disidentification allows us to identify with something even greater. The Buddha, himself, did this, as he left the privilege of his palace and its limited worldview and code.

Today that wild goddess Sofia Diaz shared part of her own trajectory, where her very devotion to spiritual matters was, in fact, an exercise in inauthenticity. It wasn’t until she stopped mimicking her spiritual teachers, painfully disentangling her identity from theirs, that she carved her own path, her own relationship to and embodiment of the divine. Tears lept to her eyes as she thanked this assembly of people for being witness to what is now an authentic voicing of her unique manifestation of the divine.

Though this differentiation can be challenging and painful and disgusting and awful—it is always a part of the process through which love evolves and allows us to identify with greater union. As an expression of love, the growth pains of conflict are not necessarily negative.

This separating energy is the clarity of discernment, that which wakes us up from samsara, the Manjushri sword. As love is not a feeling but rather an unfolding, evolutionary process and perception, and as conflict and separation are an integral stage of this love itself, it’s up to us to look them head-on. Bypass isn’t a detour, it’s a dead-end.

Of course, this separation can become pathologized. Jeff Salzman pointed aptly to the political polarization in our country: both conservatives and liberals claim, “if you’re not seeing evil and fighting against it, polarizing against it, you’re not paying attention.” The power of forgiveness, the recognition of a deeper unity, must be welcomed; but before the pain of differentiation, it’s not unity but unconscious embeddedness.

So we need to surrender to this process of harrowing separation, and we may as well do it with gusto, yet the pain keeps us painful.

Because—let’s not mince words—it usually sucks, right? The untangling is wrenching. Like brussels sprouts and squat thrusts, we’d rather just skip it and go straight to the sweetness that can come after.

Yet there’s great, discerning, clarifying energy within that very conflict. Finding the presence, patience, and courage to celebrating the discomfort, itself, was a difficult exercise. Yet Diane Hamilton pointed out the vital, energizing quality it brought to the room, and Joanne Hunt invited us to prolong that second stage of love, giving it its proper due.

What I realized throughout the rest of today is that bhakti yoga, that juicy path to enlightenment which embodies a devotional relationship with the Divine as Other, that realization and practice of fullness celebrated by Rumi and Tagore, requires separation to occur. Sally Kempton refers to this as the “path of longing.” That radiant sweetness that illumines all longing for the beloved, all praise of God, all kirtan to invoke the shri of vital luminosity—and none of this can occur without first a separation from the divine.

I invite you, in all your pain, drudgery, alienation, planned or already-failed New Year’s resolutions, to relish the sweetness in the separation, itself, and realize that this, too is a flavor of love. What will it take for you to savor it?

Speaking of juicy devotion, check out Wah!, the kirtan artist we’re listening to as I write this!

For more of my reflections from ISE2, check out Marc Gafni’s fireside chat to the volunteers and Deepak Chopra’s talk on love and consciousness.

You can catch up on this panel discussion and all the rest of the keynotes for ISE2 via the online media collection with live streaming webcast. 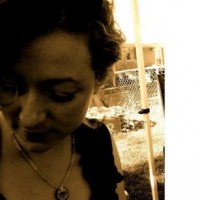 Angela Raines hails from “America’s most dangerous city,” St. Louis, MO. She recently moved to Boulder, CO (as one does) to write, do yoga, and sit. So far, … Read full bio