Free will is tricky. Like anything free, it comes with a catch. It gives us the impression that we have some control over life when in fact the only control we truly have is over ourselves and how we choose to act.

Each second of our fleeting lives contains a choice. Some are huge decisions that can alter the course of one’s existence, while others seem insignificant, like what to have for breakfast or whether to call Mom now or later. Every action has its reaction, even if it’s not apparent right away.

We humans have done our best to concretize our control over life, paving, constructing and crafting our environments in such a way that the power of Nature appears diminished. Those in positions of power even assert control over each other. It’s as if we believe we’ve mastered the Universe as the highest form of life, but when Nature asserts her strength, takes herself back, we’re surprised and appalled at her fury, devastated by her “destruction” and disruption. Animals and those tuned to a simpler existence, “lower” forms of life by human standards, recognize the warning signs and find safety in many cases. Those of us pounding the pavement with iPods in our ears and texting on our cell phones, assessing our value by how many dollars we have in the bank or how productive we can be in one day, remain oblivious until it’s too late.

Seems like a pretty grave way to live, making such a big deal about every minute detail, but a lifetime can pass in the blink of an eye. It’s important to be conscious of how you spend your free will.

Arriving back in the states after three years in the Third World was a shock to the system to say the least. I vowed to myself to maintain the simplicity I’d pared down to, promised myself I wouldn’t rush to keep up. In a matter of weeks, though, it seemed that not keeping up meant being in the way and at risk of being barreled over. Adaptation, I decided, meant moving at the pace of life, and so I sped up.

After a few weeks of doing too much and staying too distracted to notice, however, I found myself way off track. I got totally wiped out.  Anxiety erupted in my chest like a volcano. Restlessness shook me out of good nights’ sleep. Enjoying proper meals eroded to grabbing on the go. Before long, I felt like a disaster.

One afternoon, on the el train high above the streets of Philadelphia, on my way home from doing too much, exhausted, I looked above the rooftops and saw the sky, vast, infinite. I looked across the skyline to the sun glinting off the rippling river. I saw the cars jammed nose to tail, crawling on the interstate below. It dawned on me that places are created things one can choose or opt out of to any degree. Anywhere in the world you go, there is Divinity all around. The sky is the sky wherever you go. The rivers and seas are watery universes flowing alongside our own. The trees stand rooted and reaching out their message for hundreds of years, fruiting, offering, dying, and fruiting again. The sun and the moon shine an endless circle of light around us all.

Suddenly I realized that adaptation is not about moving at the pace of the culture around you. Adaptation is tuning into your own Truth and living according to that, regardless of what else is going on.

I chose to slow down.

Meditation has been a part of my whole adult life. There are still days, though, when I get caught up and bypass it. Drinking the morning cup of coffee and coordinating what to wear can seem more important when preparing for the day. Perhaps perpetuating illusion is less scary than facing reality. Thankfully, my practice has also taught me that chiseling away the falsities surrounding my core of truth makes life more enjoyable moment to moment. Meditation and asana are not just exercises. They’re tools for precisely this task: whittling ourselves to a sharp point.

And so I came back to sitting, and rediscovered the best part about practice: it’s immediate medicine. It doesn’t take days or weeks to get through your system. It brings you back to now, NOW. Unfortunately whatever mess you’ve made in your absence does require tending to, and that can take some time.

There is a parable in the Mahabharata about an archery contest in which Arjuna, the story’s hero, partook. One by one, the town’s best archers came to test their skill. The target was a revolving wooden fish suspended from a tall tree above a pool of oil; the bullseye was its eye. The challenge was that the archers were to hit the mark by fixing only on its reflection in the pool. Each contestant arrived at his turn. To test his aim, before being allowed to shoot, the contestants were asked, “What do you see?”. Each in turn replied, “The fish, the tree, the pool”, and was immediately dismissed.

When it was Arjuna’s turn to shoot, he was asked what he saw. He replied simply, “All I see is the fish’s eye”. He was permitted to shoot and hit the eye dead on.

Free will is a gift, a tool to be utilized with precision. We have the choice to wield it about like an octopus, flailing outward in every direction, but while we may accomplish many small things, maybe even hit close to our target, chances are we’ll lose sight of the mark.

A better use of our freedom to choose is to turn it on ourselves, to identify one by one the things that aren’t true and whittle them away, like a sculptor revealing a work of art, or a warrior carving his arrow.

Let yourself be honed to a fine point (and trust that this may be an uncomfortable process!).
Aim true, and let yourself fly. 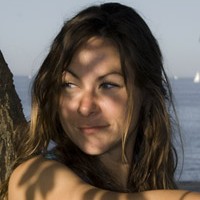 Originally from Philadelphia, Pennsylvania, Nicole Smith is back home rediscovering her roots after three years making her home in Central and South America. As both Yoga Teac… Read full bio