When I had to buy bigger pants, I knew I had gone too far…

In The New York Times most e-mailed section this week was an article titled: Go Easy on Yourself, a New Wave of Research Urges. It discusses a study done on self-compassion that challenged the advice given by many doctors and self-help books to practice willpower and self-discipline. Instead, the research suggested that one should practice self-compassion as it can be more effective in achieving goals, such as trying to lose weight.

The NY Times piece points out the fact that people who are more understanding and compassionate about others’ flaws, are less so with their own. The piece also brings up the challenge of over-indulgence: at what point does self-compassion become over-indulgence?

A few months ago I had my own experience with over-indulgence that was cleverly disguised as self-compassion. I had entered a period of time (something like what Picasso may have called his Yellow Period) in which I was excessively compassionate with myself—to the point that I was allowing myself certain luxuries… everyday.

If I wanted a meal out, I gave it to myself.

If I wanted three meals out in one day, I did that too.

If I wanted a slice of tiramisu, every day, for a month—I did that too.

You only live once! Was my mantra.

When I had to buy bigger pants, I knew I had gone too far. My lululemon tops were starting to chafe my armpits and I found myself giving clothes away to friends. I was reminded of a time at age seven when I once over-indulged in seven chocolate pudding packs back-to-back. I ended up in the emergency room because I was lactose intolerant.

After reading this article in The NY Times, I realized that it was addressing two different types of self-compassion. The first type is giving yourself permission to enjoy certain things without guilt. The other type is simply forgiving your own flaws. Both practices are self-compassionate, but the former is the one that can give way to over-indulgence if not monitored carefully, as it was in my case.

The piece also points out that one way to be self-compassionate is to monitor self-indulgence. The NY Times piece gives this example: “The reason you don’t let your children eat five big tubs of ice cream is because you care about them. With self-compassion, if you care about yourself, you do what’s healthy for you rather than what’s harmful to you.”

Self-compassion slowly turned into self-criticizing for me, because I had let it become over-indulgence.

So now I am trying to teach myself new patterns of self-compassion. I realize that it doesn’t have to come in the form of food or spa treatments. It can come in many more subtle forms:

Drinking coffee out of a mug and not a to-go cup.

Allowing more time to spend with my friends and family.

Squeezing a yoga practice in at a new studio.

Taking time to read the newspaper.

Painting my own toenails.

Taking time to practice simple routines that fulfill you, such as the ones above for me, is a way of being compassionate toward oneself without being over-indulgent. In moments when self-criticizing does creep to the surface, finding one of these practices can be useful in putting your energy towards something more productive, and compassionate at the same time.

What do you think?
Where is the line between self-compassion and overindulgence? 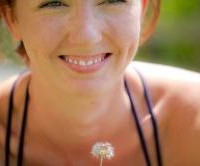 Lauren Hanna, E-RYT 200, MSS Candidate, is a social worker by day and yoga ninja by night. It was in Pittsburgh that she first discovered the thrill of yoga and her love for s… Read full bio