If You’re Happy And You Know It Bend Your Knees!

The Best Advice a Yoga Teacher Ever Gave Me.

I peered over my left shoulder and met my favorite yoga teacher’s gaze with puzzlement. She nodded encouragingly, and whispered again: “Bend your knees. Then you’ll be able to touch your toes.”

I looked back down at the floor. It was a very long way away. My feet were down there too, big toes touching, at the bottom of two very straight legs. I had always wondered what it would be like to touch those toes. Instead, my fingertips dangled fruitlessly in midair. Unable to support myself with my hands, I leaned back in my heels, countering the weight of my rounded upper body and overstretching my tight hamstrings. As usual, the standing forward bend made my trapezius muscles ache and I clenched my jaw in response.

I considered these three words. Bend. Your. Knees. No yoga teacher had ever spoken them to me before. I had spent 10 years in yoga classes measuring the distance between my fingertips and the floor. It was usually at least six inches. Since I had taken up running five miles a day, probably eight. Even worse were the seated forward bends in Iyengar classes, which the teacher wouldn’t let me take since I couldn’t do it without rounding my back. So I’d just sit there bolt upright with a strap around my feet, forlornly watching as everyone else rested their weary heads on their welcoming knees.

I looked at my own knees and suddenly they seemed kind of welcoming. Just bend us, they said. Go on, try it. Just a little. I glanced at my distant toes again. They were so far. But if I just bend my knees, maybe, just maybe….

As if leaning in to share a secret, the earth came conspiratorially closer. I felt my hamstrings and back sigh with release as my knees drew toward my heart and suddenly my belly was resting on my own thighs in a forward bend that would probably make Mr. Iyengar throw up in his mouth a little. I felt the lengthening in my low back that had always eluded me. Just a little further and there! My calloused, somewhat hairy, paint chipped, perfect toes came within reach of my finger tips. It was everything I had dreamed it would be, and more.

I felt my body inviting me into a place that I had always felt ostracized from before. I felt silly for never having come up with the idea by myself. I felt empowered as I reclaimed access to my body from head to toe. So I did it again, and again, and again.

Not more than a couple of weeks later, I realized that I was only doing the tiniest micro bend in my knees. A week after that I was able to engage my quadriceps, watch my knee caps lift and root my feet down as my legs slowly straightened without my fingertips losing contact with earth. In another week my palms were flat on the floor. “You’re getting more flexible,” my teacher commented. After a decade of practicing yoga, it took three words and only about four weeks for my forehead to touch my shins.

In all the profound moments of a 17 year practice that has spanned two continents, numerous styles and countless teachers, this was the most pivotal. It wasn’t kneeling at an altar in Dharamsala or performing some impressive arm balance on a magazine cover, although both of those would be nice. No, my breakthrough moment was being given the okay to bend my knees in a forward bend. It was being given permission to shape the practice of yoga to my unique body, which gave me the freedom to accept who I was and empowered me to become exactly who I wanted to become.

I’ve moved states three times since that class and haven’t seen my old teacher in years. The last time I saw her it was a hot summer day and I ran into her at an outdoor festival in Vermont. She was heavily pregnant with a baby in a pram and at least two other children in tow. She was taking a break from teaching, understandably, but strangely I wasn’t at all sad to hear that. I felt like she had started the ripple, and now I was teaching yoga and there was no way for that ripple to go but out. As a yoga teacher today, the best advice I can possibly impart to my students are those three sweet words she whispered into my ear long ago: bend your knees. Some days I absolutely insist on it.

If you’re a yoga teacher looking for creative ways to impact your students, try putting the spiritual texts aside for a moment, look at the bodies in front of you, and consider where people are feeling stuck and what simple directive could help them break through.

If you’re a yoga student who can’t touch your toes, don’t wait for an invitation. It might not come for 10 years. Just bend your knees.

And if you’ve never done yoga because you can’t touch your toes, you just officially ran out of excuses.

See you in class! 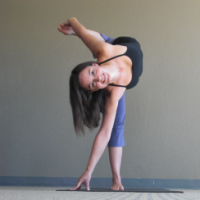 Julia Clarke is a yoga teacher and writer in Vail, Colorado where she loves and plays every day. You can read her work at Friendly Universe Yoga. … Read full bio