Dave Romanelli’s Favorite Quote Ever, by Thich Nhat Hanh… (plus: Kishan, the Fabio of Yoga)

The setting could not have been more perfect…yoga, wine, rain and thunder.

After a successful Saturday at Mountain Pose Festival, Copper is underwater and we have (finally) arrived at David Romanelli’s Wine and Yoga class.

Wine and Yoga? “Don’t Drink and Practice” has typically been my motto, but I have always been open to entertaining, “Practice and then Drink.”

David doesn’t quote the Yoga Sutras, Bhagavad Gita, Rumi or Hafiz to begin class. He reads us a story (#1) about some embarrassing uses of “auto-correct” on his cell phone. Apparently, he accidentally texted one of his students that he was excited to see her “pussy” instead of the “posse” she was going to bring to the workshop he was hosting the following day. There was some yelling and a husband involved…

Hmm…and wine is a part of this class too? This might just be my kind of practice.

(For the record, I am not practicing – I am set up in the back of the room, poised and  ready to give a blow by blow of all the exciting things that happen during a yoga class. It’s is a packed room, so I gave up my spot for Waylon and his 9 foot long Manduka mat.)

Then he gives a shout out for stoners! Yes! I give him a thumbs up from behind the computer while everyone else is enjoying their 150th downdog of the day.

Jack Johnson starts to come through the speakers as Dave gives leads the class through a little crescent-lunging-twisting action.

“If you don’t want me to adjust you just tell me to ‘Get my hands off you,'” says Dave, looking quite ghetto in his Spiritual Gangster t-shirt.

Nice! There have been plenty of times I have wanted to tell a teacher to just put their hands in the air and back away slowly. There really isn’t a super nice way to say it. Dave has made me feel empowered and if I were practicing right now, I might say that to him just because I could.

“Where is the wine?” (I am speaking for the entire class here)

Now he is talking about Drakkar Noir and how used to wear it so he could score with chicks while in class suffers through extended side angle because we are all jonesing for a glass of the good stuff . He goes on and on to drive the point home about the sense of smell and how your sense of smell is the closest smell linked to memory and the only sense that can invoke emotion.

Drats! Kishan Shah is now helping to adjust. Man, now I wish I was practicing. He actually smelled amazing.

From what I hear, the ladies sort of love Kishan. What's not to love? PHOTO: www.carlkerridge.com

Holding everyone in forearm plank be busts out his favorite quote…

Teasing us with inspiring quotes while in forearm plank, espeically when we know everyone is just thinking about wine, that is just wrong! (Well, again… I am not in forearm plank, I am sittin’ on my keester here writing this post.)  Dave then starts talking about the pitfalls of being attached to your phone, computer, facebook, twitter and he cries out, “When is everyone just gonna start livin’ in the moment!” throwing his hands to the heavens.

I tweet that shit, knowing full well he is talking about people like me who check their email right when they wake up on their iPhone while taking a morning pee.

He glares at me.

I try to hide behind my 6 inch computer monitor.

He plays some Grateful Dead.

“Be careful not to get your head stuck in someone’s ass, that would be awkward,” says Dave Romanelli as he guides the class in Prasarita Padottanasana while The Dead play a slow jam.

I have to admit, from this vantage point, watching a bunch of yogi’s stick their asses in the air is sort of a yawn. I mean, once you have seen on ass in a pair of be present pants, you have seen them all.

A packed class - but everyone knows we were really only there for the wine. PHOTO: www.carlkerridge.com

“It is only a matter of time that time has come. There is a yoga critic out there. ”

A Yoga critic?  I mean, why didn’t I think of that first! I sort of have that power at this very moment, don’t I?  Have I been beat at my own game? Secretly (or not so secretly) a couple of us here at elephant call your bluff on that, Dave, and think you just like making things up about bodily functions.

Don’t worry, I’ll stick to learning journalism from Waylon Lewis at and writing self-depreciating stories about my own life. I don’t need to slam your (fine) teaching and compare it to having a colonoscopy, a lobotomy or a bad case of gas.

Finishing postures at last! I can almost taste the top notes of raspberry with a spicy chocolate finish! I am just exhausted sitting here after watching everyone do vinyasas for the last hour.

All in all, this was a truly unique, funny, and uplifting class. It is so cool to see people teaching from their gifts, using what is important to them “off the mat” to inspire union for their students in a new way. Dave has a love for food, wine, chocolate and I would imagine some things that I may or may not be able to share in this article. He teaches through a deep love and appreciation for the senses and how they can help to enrich our everyday experiences, when we choose to participate with them in the moment.

While in savasana, true to his laid back stoner/hippie/non new-agey spiritualist/foodie form, he let everyone know that there is a chance the lavender he offered to the resting yogis might be laced with LSD. The best part? Everyone wanted some.

You should have been there 30-45 minutes after class! PHOTO: www.carlkerridge.com

Enjoy some Dave Romanelli…Livin’ in the Moment!

Bonus video: For anyone who wants to try actually drinking wine while practicing…This one is for you, Dave!

Double Bonus: Another picture of Kishan!

The Fabio of Yoga - Photo: www.kishanshah.com 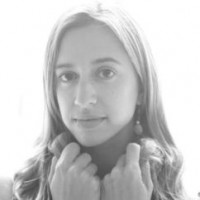 Whether in a business suit, on a yoga mat or a meditation cushion, Jessica will follow her Dharma to the ends of the earth and work to bridge the gap with the world and the li… Read full bio