Visual artist Claire Morgan, who hails from Belfast and now lives in London, stages through her sculptural installations dramatic contests between natural forces. The artist’s provocative hanging environments, mainly composed of organic materials, have been exhibited in several museum and galleries, including  Adventure Ecology, which named Morgan resident artist in 2008. Morgan’s precarious formations express both ecological order and disorder.

The armatures of a mechanistic universe are highlighted by Morgan’s fragile materials and intricate construction patterns that address gravity, time, and animal instincts as well as the building blocks of matter, our everyday surroundings, and elemental survival. Indeed, her taxidermied animals, her meticulously pinned botanical and zoological specimens, and her use of blood stem from an almost Victorian language of science. Still there is nothing antiquated about her modern ecosystems that seem to defy the very physical and chemical laws they highlight. Her physical constructions point to unexpected outcomes, the transience of the natural world, and ineffable, transcendent realms, such as those of beauty, spirit, death, and mystery.

ALJ: The relationship between movement and stillness is so compelling in your installations. Not only do you integrate living and inanimate materials (each with their individual velocities of action), but the compositional patterns themselves have a rhythmic musical force. Could you please comment on the temporal aspect of your artwork and on your own methodical artistic process?

CM: Temporality has always been an important aspect of the things I make. At the very beginning all my ideas involved materials that were changing very fast, ice, fruit, unpreserved animal carcasses and live insects breeding, so the experience of one viewer would differ from that of the next. Over time my ideas seem to have become more static, though with a view to achieving something akin to a freezeframe of an (often dramatic) action or process, so that the passing of time, or otherwise, becomes acutely apparent. I would like to achieve something that is neither moving nor still, or that possesses a certain contradiction by virtue of the combination of the two within it.

Recently I have coupled different organic materials to achieve quite extreme examples of this. Fluid is a piece where a crow appears to be plumetting through a dense plane of vivid red strawberries. The crow is a taxidermy specimen, but the strawberries surrounding it are fresh and begin to decay before the piece can even be fully installed, dripping juices and mould all around the crow, thus conflicting with the notion of what taxidermy traditionally is, and our own preconceptions of how we might relate to each aspect of the work. It plays with time and this is a notion I am interested in pushing as far as I can.

In terms of the processes I use to make my work, and the way that the masses of small objects function as a whole, I enjoy the way the pieces appear to have been manufactured by a machine building patterns, much like nature but less successful, less beautiful, and less sustainable. The aspect of human error in the works make apparent the unnecessary, illogical levels of labour involved in the processes of construction, and the innate futility of this labour when the frailty and worthlessness of the individual materials is considered. The evidence of labour highlights the passing of time in general, and its connectedness with the tangible nature of mortality. My sculptures tend to be composed of series of completely unconnected elements, for me representing a simultaneous achievement of everything and nothing.

ALJ: Manufacture and decomposition seem to present themselves in equal measure. Putting it another way, life and death as well as geometry and chaos appear to have equal play. Could you please remark on this ambiguity between forms that are simultaneously drawn together and pulled apart?

CM: I find there is often unity between disparate elements, a sort of visual conversation that is enhanced by the inherent differences between materials or forms. This reflects the natural balance as I see it. A balance which is constantly in flux, in which either extreme relies on the other. Life and death are intrinsically linked, they are the same, and everything else falls between them in one way or another. I repeatedly return to exploring this through very simple but firm chaotic interventions within the overall geometric shapes that form the basis of the majority of my works.

ALJ: Ecological relationships stand out in the web of your creations. How would you briefly summarize your view of nature’s order and of the human relationship to the beyond human?

CM: Our relationship with nature is an unhealthy one. We veer between living at odds with nature, and embracing nature in ways that are highly controlled, mediated or contrived. I do not intend to make work that is political. My materials are everyday things – organic matter and our own detritus – and if they comment on this, it is a result of them literally being a product of it. My work is an intuitive exploration of things I observe, and I hope for it to be read as this rather than as an opinion or statement of fact.

ALJ: Many of the animals in your artwork seem to evoke a potential for freedom and life’s poignant vulnerability. What draws you to the theme of captivity? To the relationship of predator and prey?

CM: I am interested in the way we think we are in control of the things around us, and in our blind confidence about this. I wonder about how that impacts on us in reality. Beyond the immediate reference to animals and how they might survive or otherwise in a manufactured situation, on another level the animals in my work are symbolic of the human, located within the environments we have constructed around ourselves. In this sense the reference to captivity becomes more complicated.

ALJ: There is a current of both optical illusionism and whimsical subversiveness to your artwork. In this respect, one recalls artists like René Magritte and M. C. Escher. Do you identify as an artist with the creative role of a conjurer, be it, perhaps, a magician or a shaman?

CM: I believe art can have power and in my work I aspire to bring life to contrived situations, through suspension presenting my materials in a state that lies somewhere between stillness and movement. I want to be shocked by, and make other people shocked by, very normal things. In order to achieve this I am always trying to take things a step further than entirely necessary – making sculpture that poses a genuine physical and mental challenge for me and hoping it might have a powerful impact others who look at it. I suppose what a conjourer does is create something that was previously unimaginable. That would be a wonderful thing to be capable of.

Previous posted by the author on Eco Chick. 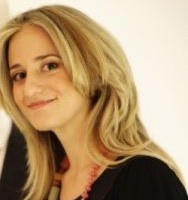 Alicia Lubowski-Jahn holds a Ph.D. in art history from the Institute of Fine Arts, New York University. She began to build an expertise in landscape art through her doctoral d… Read full bio