Why vegetarians are monogamish.

Working in the Safe Sex Industry (I co-founded a one-for-one condom company), I am constantly exposed to the colorful world of perceptions and attitudes around our big relational hot spots. No issue, it seems, is more seeped in cultural and historical lore more than Monogamy. For some, it is the foundation of our culture—and perhaps our very humanity. For others, it is merely a nice way to keep people in line with the status quo while denying our essential nature.

In the book “Sex at Dawn”, as veil after veil (i.e. preconceived notions of things) drops away, the more interesting and challenging questions are revealed; is Monogamy similar to Vegetarianism in that it is a choice made by a group of people to live their lives in a way that they deem to be better or perhaps more moral? Does it really matter if this choice has nothing to do with the way we as a species are biologically designed? Or does it? And where is the opportunity for individual freedom to be expressed within these notions?

The below is an excerpt from the highly thought-provoking dialogue between Salon.com and Christopher Ryan, the co-author of the recently released “Sex at Dawn”,  which looks at the underpinnings of many of our pre-conceived notions about the role of monogamy in human evolution.

Looking forward to the discussion here on Ele.

(originally posted over at Salon.com)

…Psychologist Christopher Ryan is out to defeat an archetypal figure in the mythology of monogamy. No, not Prince Charming; he’s after the widespread belief in a prehistoric hunter who would slay an antelope on the plains and heroically haul it back to his nuclear family.

You might wonder what this has to do with monogamy. Well, Ryan argues that in actuality, the meat would have been shared with the entire tribe, because pre-agricultural societies shared everything—including sex. This is a key point he and co-author/wife Cacilda Jethá make in “Sex at Dawn,”… Our hunting and gathering ancestors were nonmonogamous, they argue—the implication being that, biologically speaking, sexual exclusivity is unnatural.

The book challenges much of the previously accepted wisdom about the sex lives of our ancestors, although the authors admit they haven’t exactly proved their case. Regardless, they have gained praise and admiration from sexual radicals like sex columnist Dan Savage. That makes Ryan an ideal final interview in Salon’s monogamy series, which was originally sparked by Savage’s thoughts in a New York Times Magazine piece about “monogam-ish” marriage.

Salon spoke to Ryan by phone at his home in Barcelona, just as he prepared for a road trip with Jethá. They planned to set out without a destination in mind, enjoy the drive and figure it out as they went—which is awfully similar to their attitude toward monogamy in their marriage.

Why is it wrong, as you argue, to assume that women are the choosy sex and men just want to spread their seed indiscriminately?

Well, there’s a grain of truth there on a biological level. There’s no denying that women make a greater biological investment in pregnancy and gestation than men do. There’s no denying the fact that men produce millions of sperm cells in the amount of time that a woman releases one egg. But when you look at highly intelligent, highly social species—particularly primates, but also dolphins—what you find is that that’s not the way things happen. The assumption that women are choosing mates based on their access to resources is simply not the way it works in primates that are intelligent and social. In fact, there are no social, group-living primates that are monogamous.

What you find in highly social species is that resources tend to be shared, particularly in bonobos and to some extent in chimps. When you look at pre-agricultural human societies, there really is no private property. Even the best hunters gain their status by sharing what they catch. The worst thing you can do in those societies is hoard food. We’re not saying these are “noble savages,” we’re not slipping into that “oh, they’re so much better than us” mindset—in fact, they’re just like us. They’re just in a very different situation in which the best way to spread risk is too share. Today I might kill an antelope, but I’m probably not going to again for a week or two. You don’t just go out and shoot an antelope like you go to the grocery store. The way to make sure that everyone eats, especially in a situation where there is no refrigeration, is to share what we find.

They share their shelter, defense, childcare, food, access to the spirit world—why should we believe that sex is the one thing that they don’t share? What we argue is that’s an economic issue, it’s something that happens with the advent of agriculture when suddenly men became obsessed with paternity because they had this accumulated property that they wanted to pass to their children.

You mentioned love briefly—how does it figure into all of this?

Cacilda and I don’t dispute that love is a very important human emotion and is deeply embedded in our nature. In fact, one of the things that we do best is love other people. But what we do dispute is that it’s necessarily linked to sexual exclusivity. I think that’s something that’s very much culturally encouraged in our possessive, imperialistic society. Whereas in many of the societies we discuss in the book, there’s not a lot of accumulated property like in agricultural societies, and there are rituals that are expressly designed to discourage that possessiveness and jealousy. That might suggest that there is a natural inclination toward jealousy and that these societies are working intentionally to minimize that response, whereas we live in a society that works to maximize it.

How natural is sexual jealousy, then?

Head over to Salon.com to read more. 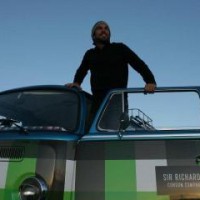 Mathew is the Co-Founder of Sir Richard’s Condom Company. In much of the world there is a severe unmet demand for free contraceptives. In response, Sir Richard’s dev… Read full bio