Save The Human Race.

Connecting With My Ancestors.

When I dance, and the music is right, I like to break out into the Tarantella. No one taught me how to do the dance, my body just knows. The ancient dance lives in my bones. Spinning and jumping together make for a delicious taste of ecstasy. Often while spinning, I see myself in another time and place, circled by gypsies and tambourines dancing around a fire. I feel a sense of belonging to this tribe of nomads, a connection from a long time ago.

In my waking life, however, my ordinary-post-meditation-mind, I don’t know where I belong. Having had to separate from my family of origin as a young person left me with the existential angst of feeling untethered. I don’t think this sense of disconnection would ache so much if I hadn’t known its opposite at some time in my karmic history. These wild dancing gypsies have lived in my meditations and dreams for as long as I can remember.

While attending Naropa University’s Transpersonal Counseling program, I studied for one year with a shaman from Africa, Malidoma Some. A small group of Buddhist practitioners were drawn to this mysterious teacher and spent weekends up in Shamabhala Mountain Center learning about the indigenous wisdom of the Dagara people. One aspect of the teachings that was particularly compelling to me was the emphasis placed on connecting with one’s personal ancestral lineage. It was troubling to me because I didn’t feel like I had one. Why was it so important? From what I knew the suffering that I inherited in my family had been passed down through many generations.

According to Malidoma and the belief of the Dagara people, the survival of the human race depends on our connection with our human ancestors. Many of their practices and rituals have to do with sustaining and reviving these connections. When I spoke with him about my conflicts he encouraged me to make use of the ritual container to express all my feelings, especially the anger and grief. He explained how it was important to come into genuine relationship, which meant both harvesting the gifts passed down to me as well as the challenges.

During this process, I was able to get in touch with my grandmother to find out more about my Italian relatives. I received names and a few photographs going back several generations. I became curious about the Italian part of me. I started hanging out with Italian people and learning about the language and culture. There was so much about my identity that had its roots in a place I knew nothing about.

I took my first trip to Italy this past month. I had an inner sense that it was time. Upon arriving in Calabria, I spent one day exploring the stunning beaches surrounding the place where my family is from. My grandparents came from two small villages up in the hills on overlooking the sea. Historically, the people of Calabria moved away from the coasts and into the hills due to continued attacks by foreign invaders.

The next day was very hot and the road leading up into the hills was narrow and windy. There was nothing and no one around and even my GPS device was lost. I became very anxious and wanted to turn around. The problem was that you couldn’t turn around, the road being too steep and narrow. So, I continued going up until I came to a set of buildings with a small parking area and overlook. “Okay. That’s it. I’m going back down.” I got out of the car to stretch and out of the corner of my eye I saw roses poking out behind a stone wall. I walked towards them and discovered a well maintained cemetery. Since I was technically now in my grandfather’s village, I proceeded to take a closer look.

I walked around the rows and found numerous gravestones of my relatives. I remembered their names from my time with Malidoma. It was surreal and magical.  I placed my hands on the stones of my closest relatives and whispered, “E finito. Sto bene. Tutto bene. Grazie per la mia vita.” I hadn’t thought about what I would say to them and I don’t really speak Italian, but this is what spontaneously arose in my heart. I wanted them to know that I forgave them, that I was okay now, that everything was okay, and to thank them for my life. I felt a need to quite literally lay things to rest. When I felt complete with my prayers in the graveyard, I walked back to my car and saw a small chapel. I haven’t been into a church since childhood. To my surprise, there was no Jesus hanging on a cross, but rather I found the great mother holding her baby. Being superstitious like my Italian peoples, I took this as a good sign, that the goddess was holding all of us in her love. I spent some time communing with her asking to receive the blessings of my peoples and to make the best of this human life which I am so lucky to have.

On my way back down to the sea. I stopped in a small market to get some local fruit. Of course, no one spoke English, but after a few minutes attempting to explain who I was, a man walked in and everyone became very excited since he was one person in the village that did speak English. He translated back and forth and what I could make out in the end was that the brother of the priest in the village is married to my aunt’s cousin’s cousin and so therefore the cashier ringing up my fruit was related to me through this unbroken chain.

I spent the next day in Soverato, a hip and cool beach town just below the hills where my people lay. Throughout a joyful day of sunning and swimming in the ocean, I looked up over my shoulder from time to time and had a special feeling inside. I had found my place, the place where I came from, and a sense of connection to the earth and her peoples.

I later found out that the Tarantella dance has its roots in ancient Greece. It was a ritualistic dance in honor of the god of music and sun Apollo, and the god of wine Dionysus. The ancient Greeks settled in Sicili, Naples, and southern Italy, and continue this beautiful dance to this day. The music is different now, but it has a similar hypnotic effect, especially when people are exposed to the rhythm for a long period of time. 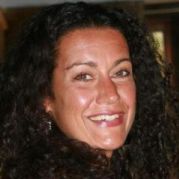 Tina Fossella, MFT, is a Contemplative Psychotherapist practicing in San Francisco, CA. She is passionate about the integration of psychological work and spiritual practice to… Read full bio