Seeking Peach: The Sutras of the Super Mario Bros.

Nintendo announced that the successor to their Wii system will arrive in 2012. I’ve never Wii’d, and as the video game controllers became more and more complicated through the various system “upgrades”, I’ve fallen far off the gaming wagon. That being said, I was a Super Mario girl (actually I preferred Luigi, I like green) back in the day (the day of 5 simple controller buttons vs. 16 buttons + joystick + motion sensor + wireless headset + balance board…)

On the original NES console, Super Mario Bros. was the platform game of the times…and of the future! The Mario story has been rolled over through all the Nintendo upgrades, and has been branched into the soap opera of the century with game spin-offs. (Nintendo developers…call me. I’ve got a team of Yoga experts lined up to help you build a brand new Mario Bros. manifesto.)

In the midst of a Mario memory meditation, I was inspired once again to recognize Yoga in pop culture. As far as I can see, the eight-fold path of Yoga is laid out, flat-screen, in the story of the Super Mario Bros.

For the unfamiliar, the basic plot of the original Super Mario Bros. game features the game player as Mario who travels through eight “worlds” in order to save Princess Toadstool (aka “Peach”) from the evil Bowser dragon-looking monster. The first seven domains are guarded by Bowser’s children, the Koopalings, and the final eighth castle is held by the fierce foe himself.

As I insert the game cartridge and hit the power button (and then push the reset button three times, and then take the cartridge out and blow on it before re-inserting it and trying again), the game flickers to life and I am reminded of Patanjali’s first Yoga Sutra, “atha yogānuśāsanam—Now the exposition of Yoga is being made.”

With only eight worlds to enlightenment Princess Toadstool, Mario begins his expedition through the eight-fold outline of Yoga. Sutra II:29 outlines the branches:

Mario immediately encounters enemy obstacles such as Goombas, Koopa-Troopas, Bullet Bill, Piranha Plants, and the crabby fish Cheep-Cheep. On our Yoga path, Patanjali outlines five obstacles, or klesas, that can manifest in many forms and block our path to Peach peace. Sutra II:3 says, “Ignorance, egoism, attachment, hatred, and clinging to bodily life are the five obstacles.” Our analogical Mario battles several enemy obstacle forms on his journey to Princess Peach.

When Mario puts Yoga into practice, observing the yamas, niyamas, applying asana and pranayama, and practicing meditation, he stays conscious of the gifts offered in present play. Offerings such as the Super Mushroom of awareness give Mario a boost (literally, he grows taller) and he is able to break bricks and sustain himself longer through enemy attacks. Mario’s physical competence is a direct result of his asana practice!

As he performs his dharma (conformity to religious law, custom, duty, or one’s own quality or character), Mario collects coins throughout his journey to withstand his task. Coins offer extra game lives, as do 1-Up Mushrooms. Mario has a load of karma to work through, and needs a LOT of second chances on his journey!

In each level, Mario has an allotted amount of time to complete his tasks, and if time runs out before he finishes…he comes back again at varying past points in the game, again representing his progression or regression through his karma. Sutra II:12 describes this model, “The womb of karmas (actions and reactions) has its root in the klesas (obstacles), and the karmas bring experiences in the present or future lives.”

As Mario evolves on his karmic path, he more easily perceives and deflects the tricks and obstacles of ego-self, his continuing practice improves his tactics, and this increasing awareness opens up new routes, or warp zones to bypass to more advanced stages of his path.

If Mario is keen and diligent practicing pranayama and pratyahara in each level, he may be offered siddhis (super-natural powers) such as the Fire Flower, giving him the ability to shoot fireballs, or the Star, turning him invincible from enemy attacks (and playing a fun happy song!) Sutra III:29 gives insight, “By samyama (concentrated meditation) on the pole star comes knowledge of the stars’ movements.” If he is in complete absorption with the star, he can attain it.

But, if Mario gets too arrogant and forgets the source of his siddhis, Isvara (God), he can easily get caught unawares by an obstacle. Sutra III:52 says, “The Yogi should neither accept nor smile with pride at the admiration of even the celestial beings, as there is the possibility of his getting caught again in the undesirable.”

At the end of each world is a castle, guarded by one of Bowser’s spawns. Bowser and his minions represent various manifestations of ego attachment. After defeating each of these Koopalings, a messenger appears to Mario’s discouragement…

Poor Mario! He gets so close to samadhi but seems to lose his focus at the flagpoles and fluctuating firebars and gets pulled back into ego-consciousness. Sounds like my morning meditations! (Just kidding. There are no firebars when I practice sitting, but my cat is super annoying.)

But with faith, Mario continues his quest, for however long it may take… Sutra I:14 encourages, “Practice becomes firmly grounded when well attended to for a long time, without break in earnestness.” (I do not believe, however, that Patanjali is advocating that we plug our faces in front of our game system without a break in earnestness.)

When Mario defeats ego-abducting Bowser in the final stage, Peach appears to congratulate Mario for finding her. In our Yoga analogy, Peach is our peace, the samadhi state that comes with surrender to God and brings the end of the karmic cycle! Sutra II:45 states, “By total surrender to God, samadhi is attained.” And Sutra IV:30 guarantees joy, “From that samadhi all afflictions and karmas cease.”

At the end of the saga, it seems that Mario is instructed to remain in his world as a jivanmukta, or a liberated living being. According to Yoga philosophy, a jivanmukta is a person in samadhi who doesn’t leave the world realm, but stays involved in the world for the sake of humanity. Princess Toadstool offers Mario this role.

I hope that this pop-culture parallel doesn’t take away from the importance of the Sutras and the practices of Yoga and spirituality. It is not my intention to make light, but to shed a light in a non-conventional way…because though they may be glued to their Wii, gamer yogis exist, and they deserve a little something deeper than what the Wii Fit yoga game offers, philosophically. 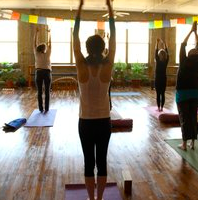 Routines vs Rituals—& why we Need Both to Live a Peaceful Life.