Eco-pioneering model, author and activist Summer Rayne Oakes has been the gorgeous face of the earth-conscious fashion movement for years, but now she is devoting her passion and commitment to a new medium: film-making. The visual poetry of her latest art short film, eXtinction, tells an eloquent and emotional story of the destruction of our planet as it runs parallel to Summer’s own life. With mind-blowing cinematography and exquisite direction by Clayton Haskell, eXtinction aims to extend Summer’s important environmental message to a new audience through this creative and groundbreaking film.

I was excited to talk with Summer last week about her new cinematic endeavor, and she was kind enough to shed some light on her creative process, inspiration and earth-minded mission.

RZ: Congratulations on the completion of your latest film project, eXtinction, which you both produced and starred in. That’s quite an accomplishment, and I must say, the film is stunningly beautiful.  Can you tell me a little bit about what inspired you to undertake this ambitious project?

SRO:  eXtinction had been inspired by a speech that I have been giving over the past three years in an attempt to connect people with how quickly elements of our biosphere are disappearing.  In many ways it is also inspired by my late mentor, Tom Eisner, who was indeed an avid protector of the environment.

RZ: In the film, you contextualize the Earth’s environmental destruction within the framework of your own life in a way that really humanizes the issues. eXtinction was clearly an extremely personal project. What was the filmmaking process like for you?

SRO:  I had a remarkable time producing the film. It is a creative medium that I haven’t yet explored fully and am excited to do more.  The process was not done in isolation. eXtinction was very much a community project and director Clayton Haskell and editor Stavros Stavropoulos worked tirelessly to perfect the film.  The film takes some inspiration from Fricke’s Koyannisqatsi, which shows earth in transition. I feel as if every decade should have its own Koyannisqatsi.

RZ: Yes- I agree. I love Koyannisqatsi, and it did remind me a bit of that film. In eXtinction, I enjoyed all the time-lapse footage and sweeping landscape shots, as well as the powerful underwater images of you. How much of this was part of director Clayton Haskell’s vision, and how much of the imagery was collaborative?

SRO: I sat down with Clay about three years ago now when I first met him on a Discovery set.  I told him about the idea of the film and that I would love to shoot with him. We just had a creative chemistry that could work for the film.  When we revisited the idea earlier this year, we spoke about it some more.  I shared with him that I saw part of it on a hospital bed – a parallel to what was happening in the world – as well as the young woman aging.

He saw some of it underwater, which was a big component of the film because we used a RED Epic for that scene and it was the first time that camera was ever used for underwater shots. (A RED Epic is a new camera that isn’t yet on the consumer market yet so it’s really cutting edge film work)

We also traveled to other parts of the world – like British Columbia and the Dominican Republic – to capture a few of the shots. Some of the nature footage and most of the time lapse came from world-renowned photographers who were excited to be a part of this project.

RZ:  I imagine they were thrilled to see their footage used in this way.

SRO:  I was so grateful to work with all the artists that I have on this film. And I believe everyone was equally thrilled to be a part of it.

RZ: This art short is not only environmentally charged, but it is really emotionally stirring. The film starts with the innocence of youth and gradually builds up intensity as it progresses, culminating in a real feeling of desperation near the end, especially the hospital bed analogy you mentioned. What were you hoping the viewer would experience as they watch the film?

SRO:  I simply am looking to move people…The film allows us to reconnect with the wonderful potential and eternal limitations of our species.  I do hope that it inspires some of us to action but eXtinction leaves that open-ended.  It allows the viewer to choose – or not to choose.

RZ: I really connected to that idea…that we all have a choice each and every day. The ending of the film was empowering and hopeful, reminding us all that we have within our reach the power to change our own future.

SRO: Indeed. The severity of the challenges ahead of us might be uncomfortable for us to hear, but it’s important to be fully aware of these challenges in order to determine what the solutions might be.  And the message of hope at the end gives us the energy and determination to find those solutions. Most of those solutions aren’t all external…empathy lies within.

RZ: Completely. For many, it is easier to sit back and pretend the challenges don’t exist, and this film pushes back and confronts that empathy with the cold hard facts.  You quote many startling environmental facts about the destruction of our planet throughout the short. In addition, you make some disheartening projections about extinction and damage yet to come. For example, you state that by the time you are 40, half of the Amazon Rainforest will be eliminated and by the time you are 50, lions in the wild will be extinct. This seems so heartbreaking! Where did you gather these predictions?

SRO: All of the data I chose to use are well-publicized projections given the current rate of destruction or removal of species. I found that everyone has one specific fact that they find most distressing out of all the other ones.

RZ: For me, it was hard to swallow the projection that soon 2 billion people wouldn’t have access to clean drinking water. It seems like this should be a basic human right.

SRO: Currently 1 billion people do not have access to clean drinking water and basic sanitation…. but with the projection of population growth combined with scarcity in water resources, the number will just (according to projections), continue to increase.

RZ: I know…it is a serious crisis situation across the globe right now. And many people have absolutely no idea there is even a shortage!

SRO: It’s hard to imagine a shortage until you live an area where there is one…

RZ: Thank you so much, Summer, for taking the time to share such an important message. The film was simply outstanding and I’m excited for more people to view it and become inspired. Where can the general public find the film in the upcoming year?

And we’re still waiting on a number of other festivals. We’ll do the film circuits for the next 8 months and then look to release the short afterwards. Everything will be updated on the website  and on the Facebook page.

RZ:  Wonderful. I look forward to meeting you in San Francisco. I would also love to talk with you again in the future about your online community, Source4Style, and your work with eco-fashion and sustainable textiles. I know you just won the 2011 CARTIER WOMEN’S INITIATIVE AWARD for North America. Congratulations to you and your team…that is very exciting! 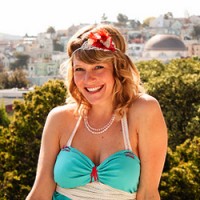 Growing up in the Colorado countryside, Rachel Znerold knew early on that she was different…she saw dazzling beauty in decomposing logs and expressed her individuality with … Read full bio