The Yoga Of Popularity.

What my Bikram yoga practice has taught me about being–or NOT being–a ‘popular girl’.

This may come as a shock to you, but growing up, I was never one of the ‘popular girls’.

I suppose it goes back to fifth grade, when I was the only girl in my class to publicly admit to disliking the New Kids On The Block.

“Their music is so trite! And their dancing? ABYSMAL!” little ten-year-old Alison would be heard to say. Meanwhile what was little Alison listening to? Mahler. Mozart. Bach. And showtunes.

Not exactly the key to popularity and social acceptance at any age.

As you can imagine, I spent a lot of time alone as a youngster, diligently memorizing lyrics to The Phantom Of The Opera, you know, just in case Broadway should call me up one day and say “Ommigod, Alison! The actress playing Christine can’t go on tonight!” and I would say, “Hey, no worries guys, I got this!” And then I would go on and play the role and nail every note and be so amazing they would ask me to continue playing the role forever and ever for the rest of my life, The End! And then wow, those popular girls would be sorry!

Ok, yeah. Starting to see why I was un-cool?

Anyway, the experience of being an unpopular kid may have made me fiercely independent and emotionally strong, but it also left me with an overwhelming disdain for all popular girls everywhere.

You guys, I can’t help it. To this day, nothing turns me off harder and faster than a big gaggle of popular clicquey girls. Nothing. And—here’s the thing you don’t realize when you’re young—the popular girls? They’re everywhere. This being popular is not just a middle school thing, it extends into every area of life! No matter where you go—college, the office, the gym, whatever—there will undoubtedly be a Clicque Of Popular Girls. It’s pretty much a law of nature. And yes, it even applies at the Bikram yoga studio.

Our studio most definitely has it’s Popular Girls. A few groups of them, actually. And just as I did when I was younger, I mostly ignore them. I don’t look them in the eye. I stand a few feet away, always. And I never, ommigod never talk to them.

Is this wrong? I don’t know. Maybe. Whatever.

Thing is, they make me uncomfortable! When they breeze into the room in their teeny tiny matching bra-top-and-trunks outfits, fancy water bottles under their arms, giggling and gossiping nonstop, well… in that moment, it doesn’t matter what their practice is like. Or what mine is like. All that matters is that they are the Popular Girls and I am the girl who doesn’t like the New Kids On The Block.

And then my brain—usually pretty smart and strong—somehow regresses back to the feeble ten-year-old version of itself and I feel incredibly inferior in every possible way and Ommigod no one wants to eat lunch with me, who will I eat with?!? And where is my ‘Andrew Lloyed Webber Anthology’ and for god’s sake when will Broadway call and help me break out of this socially awkward pre-teen angst hell?!?!?

I know what you’re thinking: Save it for therapy, O’Connor! Is this a yoga blog or your freaking dream journal? Yeesh!

Yes, every now and then I’ll take two classes in one day. Hey, Fridays are my day off! And I’m a yoga dork! What else can I say? Anyway…

The first class was great. I felt strong, I stood in the front row in the corner, I did every pose, I didn’t delay getting into any of them (not even my arch-nemesis Standing Head To Knee Pose!), and even when class ended I still felt pretty good! I took a quick break to freshen up, and, still feeling good, headed back into the hot room for Round Two.

As I’m re-setting my towels and assessing the position of my water bottles in relation to my mat (too close and I’ll accidentally knock them over, too far away and I won’t be able to reach them at the critical moment. This is tricky… Very tricky…), in walks a big group of Popular Girls.

I instinctively turn ten years old and grab my mat and move it back to the second row. Because clearly the Popular Girls will want to occupy the front row. And I don’t feel the need to try to pretend to be one of them. So whatever, they can have the front. I’m cool further back.

Class starts. We’re going through the series. I forget about the Popular Girls and focus on other things, like not letting my toes turn out in Standing Head To Knee, and really kicking my back leg up in Standing Bow, and—

Oh. Umm. Hee hee. Did she just— She did, right? She just included me with the Popular Girls? As if I were one of them? Sort of? -Ish? Umm. Huh!

Have I suddenly become a Popular Girl without knowing it? No. No. There’s no way. I don’t gossip with them. I don’t hang out with them. We scarcely acknowledge each other’s existence for god’s sake!

So then. Maybe… maybe this whole ‘being popular’ thing… Doesn’t really matter??? At least not so far as the yoga is concerned? I mean logically it makes sense. The yoga, in a way, is the great equalizer. Being popular won’t save you in that room. It won’t do the poses for you. In the end, it’s irrelevant.

And I realize suddenly that wow, this is why I love yoga. Because for 90 minutes, everyone in the room is on an even playing field. Popularity, class, socioeconomic status, wealth or lack thereof, nothing else matters. We’re all in there struggling together, with ourselves, our bodies, our minds, just trying to lock our knees in a hot room.

This practice constantly reminds us that for better or for worse, we’re more the same than we realize. You know that phrase, “Everyone loves something, fears something, and has lost something,”? This yoga reminds us—90 minutes in the hot room at a time—how true that is. And me and the Popular Girls? Well, maybe we’re not so different after all…

…but for the record, I still don’t like the New Kids On The Block. 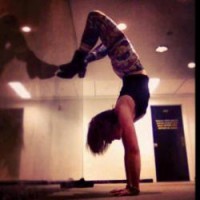 Alison O’Connor is a writer, performer, and yoga teacher living in New York City. Her writing has been featured in The New York Times, online on Elephant Journal, as well… Read full bio