Can Fear Be Good for Your Yoga Practice? Part 2

Part 1 of this post examined the five qualities of fear: confusion [or delusion], aversion, a sense of danger, a sense of weakness, and a desire to escape. (See Part 1 here.)  Of these confusion and aversion are unskillful, as Thanissaro Bhikkhu points out in Freedom From Fear.

Committed Yoga practice engages not only building your strength, flexibility and endurance physically but mentally and emotionally as well. You’re likely exploring this new terrain through meditation and self-study, reading texts like Patanjali’s Yoga Sutra and/or the Bhagavad Gita. Yet it’s a two-way street. While we’re working on expanding our capacities the Shakti—manifest creative force—starts rooting out our negativities. We may discover that some of our previous tendencies, in food, relationships or whatever else have fallen away. But sometimes our more deeply rooted fear-based issues get handed to us again and again in a variety of ways until we see the Light.

The Shakti uses our fears to show us how we may be stuck in old patterns that no longer serve us.  It’s the peeling away of the layers of the onion. One fear is driven up and out only to be replaced by another fear in whatever mask it’s wearing—jealousy, control, procrastination, etc.—our remaining fears have dissolved or are greatly diminished. It would be nice if this always happened when there’s nobody else around but the Shakti will use any possible situation to drive out fear in order to create more space for love.

We may become more patient and compassionate toward ourselves in the process. Yet we’re no longer helpless or passive here. It’s not like it was when fear was running the show. Our role is now to get off our asana and develop the mental strengths needed to embody fearlessness.

As given in the Pali Canon, these are conviction, persistence, mindfulness, concentration, and discernment. (See my post on discernment here.) While these might sound like magic bullets they each require us supporting them with heedfulness or attention, says Thanissaro Bhikkhu.  In counteracting a particular delusion each strength demands our full attention just to keep our mind from backsliding into fear.

This is where the sense of weakness, the sense of danger and the desire to escape come into play. Bringing our non-judgmental attention to them can prevent us from becoming complacent toward our fears.

Thanissaro Bhikkhu uses the analogy of the deer caught in the hunter’s headlights. We can remain there frozen, complacent, stuck and probably become dinner. Or we can recognize when the sense of weakness, the sense of danger and the desire to escape arise and then mindfully move ahead.

Having conviction in fearlessness means having conviction in your karma. “The pleasure and pain we experience depend on the quality of the intentions on which we act,” Thanissaro  Bhikkhu reminds us. With conviction can come bravery and the willingness to make sacrifices for the longterm higher good of ourselves and others—whether or not the results manifest in our lifetime. We can build a reserve of what he calls “generous and virtuous” actions that form a “first line of defense” against dangers and fear.

To that end conviction views life entirely as a means to developing our state of mind. Any other belief about life being a precious possession  is just another delusion. A fully developed mind is eternally safe, having become something that, as Thanissaro Bhikkhu puts it, “no one, not even death, can harm.” Not that we do foolhardy things to prove a point. We play our karmic role to our greatest ability, nourishing, opening and strengthening the body so it can give us stamina for meditation and action.

With conviction comes unconditional integrity which moves us beyond our knee-jerk reactions. With integrity the mind develops an agility that allows us to respond spontaneously yet appropriately to the situation at hand. Thus harm of any kind—in speech or action—is prevented, Thanissaro Bhikkhu says. We “give the gift of freedom from danger to limitless beings,” and to ourselves.

The Sanskrit word for conviction is stambha, one of whose meanings is a celestial scaffold between heaven and earth.* Another is, the conviction that the spirit is the true reality rather than the external world of constant change.** To support us in sustaining conviction requires the scaffolding of the next three strengths.

Also called right effort, persistence shows us we don’t have to cave in the face of fear, Thanissaro Bhikkhu says. Should a fear catch us off guard we can compassionately pick ourselves up and continue from there.

Mindfulness practice can both remind us of the dangers of giving in to our fears and teaches us to focus not on the object of our fear but on the fear in and of itself as a mental event, says Thanissaro Bhikkhu. Remaining as long as possible in witness consciousness can remove the delusion we are fearing.

One pointed concentration on our true spacious mind keeps us from identifying with fears as they arise. Practices to develop concentration include following the breath as it goes in and out, and repeating a mantra, among others. Such practices also build inner silence, another ally in becoming fearless.

Together these four strengths empower us to create a scaffold of security for ourselves and others in a world and time where our external security appears threatened at every turn. Still they need one more strength to make them fully secure, Thanissaro Bhikkhu says.

Discernment sees the passing show as rooted in “I” and “mine.” This is the ego’s false identification with impermanence, whatever is subject to aging, illness and death. When via discernment we can finally stop identifying with those things,”the aging, illness and death would stop threatening the mind,” Thanissaro Bhikkhu says. ” An unthreatened mind “would have no reason to do anything unskillful ever again.” Every quality of fear has gone. Now our innate sense of trust can flourish since there is nothing to escape from.

So, does fear have a place in a practice intended to create fearlessness? In a peculiar way, yes. If we take the time to break it down and examine it, we can discover the nature of our suffering and become skillful in countering it when it arises.

As Thanissaro Bhikkhu puts it: “Paradoxically, though, if we love ourselves enough to fear the suffering that comes from unskillful actions and attachments, and learn to believe in the way out, we’ll develop the strengths that allow us to cut through our cravings, delusions, and attachments. That way, the entire complex — the [delusion of] ‘we,’ the fear, the beliefs, the attachments — dissolves away. The freedom remaining is the only true security there is.”

Images: Red Hair Masker and Portrait of a City Deer by Lea Atiq 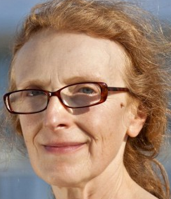