If We’re Being Honest, Yogis can kind of Suck.

Every class I teach, there is at least one student who shows up, has shown up for years, in a humble t-shirt and looking fresh out of bed.

They practice quietly and humbly, take the modifications they know they need, and leave with a smile on their face. The thing is, the thing that I notice, is that they quietly exude joy the entire time. So much so, that I leave feeling better, not for what I’ve offered, but for having the opportunity to spend time with them and to learn from their practice.

It was quite the realization for me when I discovered that yoga was this whole enterprise. A veritable popularity contest, even. I simply did not know, for a lot of years, because I came from a lesser metropolitan area when I began practicing.

Enter brand-name yoga clothing. Enter big-name yoga teachers (and more so, the tendency to attach them to your own bio). Enter confusion. Enter Facebook. Enter blow up in your face relationships with other yogis.

Over the years I’ve found a deep, dark pit of lack that has arisen from my own inner comparison with other teachers: I’m not skinny enough. I’m not young enough. I don’t wear the right clothes or have enough students, I don’t have the right friends or teach in the right places. I’m not successful enough. I’m not fill in the blank.

But I didn’t have that before. And truth be told, it’s my own inner shit, isn’t it? I know that. So what I did with it, how I decided to take aim at that particular negative habit was to get painfully honest with myself, realizing that if I have problems, my students and friends probably do too. So let’s talk about that. Let’s talk about what we don’t know, how we’re not perfect and decide to grow, together, from there.  Because once we can be honest about ourselves, we can really accept our own humanity and change what needs to be changed.

It’s not been without its pitfalls. For one: I’ve realized that I needed to step back from those that are looking for a popularity contest, from those that would lambast another teacher for having more students than they do, from those that see bodies and not souls. And radical honesty hasn’t come without it’s own kind of judgement  in and of itself. We all know it, we all recognize that there is a certain element in our community that is about profit, or popularity, or body-type,or dare I say it: EGO, and not really about the practice at all.

What I’ve noticed is that ours can be a community like any other: one with rock-stars and followers, with leaders and supporters and hatemongers and simple, unassuming, joyful people, all in one big melting pot. I’ve struggled to find myself in it, but wholeheartedly  knowing it is a community that I have chosen, and will continue to choose to be a part of. In what way, now…that is the question. That is the struggle.

Just show up. And forget everything else. Find the people you need and let go of those that you don’t. Isn’t it simple? But like yoga, oh so like this practice that I love (and sometimes hate, truth be told) that what is simple in theory can be very, very hard in practice.

Like when your friend tells you something hateful. Or something honest. And so many yogis have the tendency to say something trite, some cute little soundbite about turning your negative into a positive, there is a silver-lining-to-every-cloud kind of response. Or worse, when they tell you that according to karmic law you did this to yourself. That might be true.  But it’s like telling a friend that their tragedy was self inflicted. It might be true. But you just. don’t. say. that.

You recognize that crap happens. That someone is hurting and that sometimes things just suck, that hard times may take a painfully long process of clawing your way out like a madperson. Because yoga was never, ever, about always feeling good, happy rainbows and unicorns, but about facing our demons so that we might finally, finally let them go and in doing so, have compassion for others. So you offer a hand, an ear, a kleenex, a pie…anything. Because THAT is what you do. Not because it makes you a better yogi. But because it is the right thing to do.

And that, my friends, is yoga. Choosing the right thing to do, even when you don’t want to, which might mean being honest when you’ve failed, or being compassionate when you really, really don’t want to be.  We’re not perfect people. Not you, not me. That is why we came to yoga in the first place, isn’t it? Hopefully?

It means looking past the ego, the karma, the body, the samksara and seeing the soul.  I’m still working on it. More with myself, most of the time, than with others. And once I can really do that, certain yogis sucking so bad in their personal skills won’t really even pass my radar. So there’s hope for me yet. 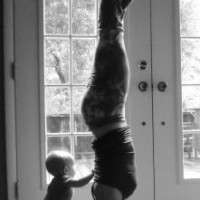