The other night while leaving my local bookstore a man followed me out to my car.

I was alone. I didn’t even hear him coming. While putting my bags down on the passenger seat he knocked on my window and scared the living shit out of me. I’d like to believe that had I not had the common sense to start the car, put it in drive and barely crack the window, I would have walked away unscathed.

The first thing he said was that I smelled pretty. I was polite and thanked him. He also said he watched me while I was picking out my books. I did not reply, all I could think was, why didn’t you approach me inside the store. I was scared and while I am generally not a rude person, I turned away and gunned it out of the lot.

I really didn’t give it much thought after that, until two days ago when I ran into him again in the same place. This time he did not approach me head on but instead sat next to me while I was having my tea and made no attempt to hide the fact that he was following me around the store. This time I had the security guard walk me to my car. I left thinking: what did I do wrong?

My mind has been reeling ever since. To say I am a magnet for men who want to do me harm is an understatement. When I was 11 a man tried to take me from Home Depot. I walked away from my parents to use the restroom. When I was 14 I was raped. I spent years 17-21 in a series of highly abusive relationships. Once a man followed me to the bathroom at a bar, cornered me when I came out and tried to rip my shirt off. There are other things, but these are the instances that I relive most often.

When I say I relive them, that may not be entirely correct. It would be more precise to say that I dissect them. Trying to locate reasons why these things keep happening. What was I wearing and was it too provocative? Did I in some way make this person believe I was interested? Was my makeup too heavy? Should I not have been where I was? Was I asking for it? What is it about me that draws these people to me, what do I have to change?

Even when I explain these situations to other people I am quick to defend my own actions. Yes, one time this older man at a bar just grabbed my breasts, but my shirt wasn’t low-cut or anything. Sure I stayed with the guy who threw me down the stairs, but I didn’t have anywhere else to go. I don’t understand why he ripped off my shirt, I didn’t even look at him.

I’ve also heard other people make excuses for the vile behavior I have encountered and whether or not they realize it, they are excuses all the same. Well Jenn, you’re a peanut, you can’t defend yourself, you shouldn’t go anywhere alone. You’re like a twinkie to a hungry mob (I kid you not, someone actually said that to me). Ya know, you’re a pretty girl, these things happen. The guy was probably wasted. The best one though is, you should be more careful. Be more careful how exactly?

I’m not sure why it took so long, but it finally dawned on me that other than bad luck, there is no justifiable reason for these things that have happened to me. I feel very foolish for seeking out answers like that but you know how they have those trick pictures where you have to find something hidden and then once you do all you can see in the picture is the hidden object? This revelation was kind of like that. Now, I can’t understand why I didn’t come to this conclusion earlier.

This is what I know: there is no excuse or reason pertaining to the victim. Period.

Here’s the catch though, I know I am not alone in having thought there was. This is something you are taught. This “blame the victim” mentality is homegrown and it needs to stop. Even just the use of the word victim used to make me cringe. There is so much negativity attached to that word and it isn’t directed toward the perpetrator like it should be. It’s directed toward the victim. Like they want attention for being on the receiving end of such a personal crime, or people’s sympathy. I was a victim, I will always be a victim and while it isn’t something I am proud of, I shouldn’t be ashamed of it either. Proud is an elusive word here too, because I am proud to have gotten through it.

While I would like to think that if someone had said to me there is nothing wrong with you, these things shouldn’t happen, I would

have believed them, I am almost positive that I would still have been searching to reason. I have some theories on why that is but nothing that doesn’t blame someone else, or society in general and while those things may be a part of it, the bigger part was how I was viewing myself.

Out of all of the different ways in which my life has changed since I started down the path I am on, without a doubt this has felt the best. To stop holding myself accountable for things that I had no control over has lightened me in so many ways. Literally I physically feel lighter.

It’s a process though, no doubt. Even just now I wanted to put into parenthesis, after I said I had no control over these events, something to the extent of: other than the fact that I stayed, or other than the fact that–you get the point. I guess this has really been one of those instances where the answer you seek is inside yourself. It certainly wasn’t in the ways I made excuses and sought them out but it took all of that to get here and let go.

Sometimes all you need is a change in perspective and the entire ways in which you view the world will be permanently altered. 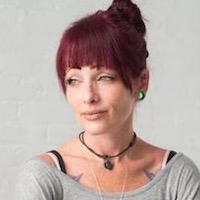