“It is a truth universally acknowledged, that a single man in possession of a good fortune, must be in want of a wife.” – Pride and Prejudice

Men throughout time have searched for their mate. It is the guiding force of the male to continue on their genetic line. What of love? Is love the guiding force now for men, are men more romantic than they were or have women through romantic books, sonnets, poems, songs, movies only dreamed that men would be want we see and hear?

I have found there are many things written on love and most hold truth or at least truth to the writer and when speaking of love what else there except truth from a individual? I think about love more than I probably should. I am a Jane Austen addict who dreams of her own Mr. Darcy. My Mr. Darcy. A man who can not dream of life without me.  As Mr. Darcy says to Elizabeth Bennet:

“In vain I have struggled. It will not do. My feelings will not be repressed. You must allow me to tell you how ardently I admire and love you.”

Those are words women long to hear. Yes, fellas the cat is out of the bag. Women want to be cherished, adored, respected, admired and (gasp) loved. We are by design a nurturing sex, we were created to take care of those around us and we are driven by the heart. Did Jane Austen tap into a man’s biggest fear when she wrote Mr. Darcy saying “A lady’s imagination is very rapid; it jumps from admiration to love, from love to matrimony, in a moment”?

Although, I can only speak for myself, I do not think every man is a possible love match. I am southern, we were raised not to search for a man. Men are the gentleman, a man is Mr. Darcy. You see my problem now, the southern upbringing coupled with Jane Austen, and the women in my family also devoted to her, which without fail is where I got my love of her writing.

I may be a lost cause.

You won’t find me on any dating websites. I won’t ask a man on a date, I won’t even tell a man if I find him attractive, ok recently I did this and it did not bode well – he had no interest in me at all. Which made me understand that my upbringing is correct. Men are the ones who should pursue. They enjoy it. Don’t get me wrong, I am not a total wallflower. I do socialize quite frequently but the men in my life are mostly friends. I am single, single, single. But not desperate. I will wait.

When a man falls in love with a women we dream he will scream it from the mountaintops however most men are like Mr. Darcy who quietly hold the feelings inside for fear or rejection.

Jane Austen herself never found a Mr. Darcy and she died young, never married and, depending on which account you believe, seemingly was left alone in heartbreak after not having enough fortune to entice a young Irish barrister named Tom. Accounts vary on how involved the two actually were. A movie was made, “Becoming Jane”, that details a love lost and lifetime of regrets. Alas, that is Hollywood’s version of events.

The movie shows Jane being alone in life while Tom goes on to prosper with his new, wealthy wife and becomes father to numerous children. Regardless of how in love they were this elusive Tom was the only person mentioned in Jane Austen’s life as a love. Jane was never offered marriage by Tom, possibly due to lack of fortune. Mr. Darcy did not receive a an affirmative to his proposal to Elizabeth Bennet and Jane Austen wrote him miserable without her. At the first opportunity, and when a small possibility that she loved him arose he raced to verify this. Did Jane Austen dream of this with her Tom? Don’t we all sometimes wish this would happen when a relationship does not go the way we hoped.

I reconciled with my husband briefly after a devastating breakup and it was the biggest mistake of my life. I would never do this again and firmly believe now that once a relationship is over, leave it. Today, many a man in Mr. Darcy’s position would  just block Elizabeth Bennett on Facebook, set her phone to roll automatically to voice mail and be done with the woman who rejected him. Jane Austen did not want her Mr. Darcy to be so lacking in character and I for one am grateful. It gives me hope.

Jamie Squires—originally from Mobile, Alabama, now living in Boulder, Colorado—is a Mom, photographer, dreamer, aspiring yogi, cloud watcher, living with Lupus and dealing with chemo. She shoots stuff. She gets the giggles. She wins big at blackjack and will give you everything in Texas Hold ‘Em. She is generous with her spirit and her laughter. She cries when she is angry and tends to make excessively long lists. She eats meat and drinks beer. She hates wearing shoes. She’s passionate and pretty magical. She’s happy and loves anyone who makes her laugh. She is covered in ink. She likes cheese. It doesn’t interest her what you do for a living, she wants to know what your dreams are. 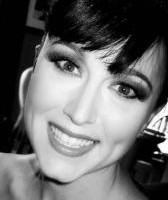