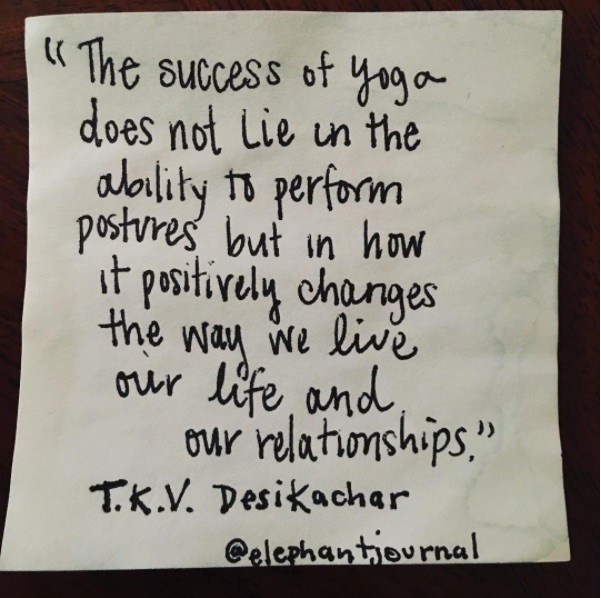 Yoga, of course, isn’t about asana. Asana is hard. Yoga is about playlists, and looking good in plastic pants made overseas for pennys on the hundreds of dollars that you paid for ’em. Only, if you’re an instafamous yoga teacher, you don’t gotta pay for ’em. Read on:

Thanks to social media, it’s easy! Now you can do something you love, or at least that’s relatively easy—and make really, really good money doing so. You can get flown around and put up in hotels and get pricey plastic clothes for free and be of benefit to others.

Urgent Update: obvi #5 is totally out of date. I mean Twitter is good for yelling at people about your politics, but yogis don’t care about politics: we care about ourselves. So focus on Instagram. Frankly, these are key to this getting rich so save yourself time ’cause time is money and that’s what yoga is about: money. And skip this list, because reading takes time. ~ ed. 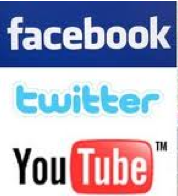 1. Create a Facebook Page. Don’t title it anything creative like “Yoga Flow with Joanna Westby”…just title it your name. Consider that you’ll want to use it for the rest of your life, or until Facebook gets Myspaced by the next Facebook.

2. Change your name to something Eastern sounding. Joanna Westby? You sound Western. Change it to something Sanskrit. Doesn’t matter what. A buddy of mine changed his name to something that means “heap.” You know, like pile of shit. But no one knows! Or cares. It just sounds cool. But Joanna Westby? No one’s paying $500/hour for a private with you. That shit don’t fly. So what do you change it to? Just google “sanskrit” words and choose something pretty. But first! Read on…

3. Go to India. Duh. Doesn’t matter what you do there, go to the beach, whatever. Just make sure to get some photos of yourself doing yoga in Mysore, or someplace that looks like Mysore, and post those on your new Facebook Page. Find a guru, or just anyone who looks like a guru, stare in her or his face until you have a spiritual moment, then talk about that on facebook, instagram and snapchat in hushed, humble, broken tones while walking down a sidewalk in Mysore or someplace that looks like Mysore. Now, you’re ready to change your name to something-or-other that is inspired by that guru, even if they’re just an ordinary layman you wilfully mistook for a guru.

4. Are you hot? If so, congratulations. If not, that’s okay, just accentuate your lack of hotness. If you’re an aging middle-aged guy, for example, just wear awkward tight yoga shorts and let your paunch bulge beneath your prAna. Be proud of yourself, whatever you look like, and it’ll work out. Wear scarves.

5. Make sure you have a twitter account. Don’t tweet often, or folks will think you have nothing to do. Unless you’re Deepak, you can’t get away with tweeting all the time. Publicize your twitter account a ton and say wise things, quotes, and offer discounts and advice.

Sample tweets for your little followers to get excited about:

What do I like to wear to bed? What beauty products do I endorse? How do I sculpt my body? What are my secrets to my divine presence?

Why am I so lonely?

6. Get a publicist. Tell them you’re sponsored by ___________ (pick a few smaller sponsors of Yoga Journal conference). Get the publicist to get you teaching at Omega, Esalen, Kripalu, and hopefully soon Wanderlust, Tadasana, Hanuman. Don’t try for Yoga Journal conferences, they’ll be onto you. Once you’re teaching at a few conferences, tell all those sponsors that aren’t sponsoring you to sponsor you. Or rather have your publicist do so. Make sure you’re pictured in their ads, looking beautiful and humble. Close your eyes, put your hands in anjali, that sort of thing. Anjali might make a great name, btw, I don’t think it’s taken.

7. Oh, right: learn how to teach yoga. Start off with a few easy ones: a teacher training at a hodunk studio that will give you the tools and a certificate. Then, do Corepower or something corporate–Yogaworks, Pure, Equinox, something like that. Take the easiest possible, unless you’re fit, then really go for it so you can learn some awesome poses to reluctantly show off in your new ads. Once you’ve done that, do a third teacher training. This shit is expensive, but don’t worry, you’ll make it back, and daddy and mommy will pay, anyways, just assure them you’re gonna be huge. The third training should be with someone hardcore. Richard Freeman would be perfect. Ana Forrest. Someone serious and well-respected will give you bragging rights that will shut up the haters and give you street cred. 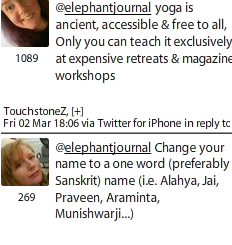 8. Now that you know how to teach, teach at a studio when you’re home. Most of the time, you’ll be traveling. Time to write your bio, if you haven’t yet. Mention that you’ve been studying for 15 years, no matter how long it’s been, and get Jasper Johal to take some naked photos of you if you’re hot, and if not do it anyways. Yoga people love the idea of imperfect bodies being beautiful—it’s almost better if you’re out of shape. Also mention your guru in India who gave you your name (but don’t define it).

9. Okay: you’ve got a publicist, teaching gigs, spiritual retreats and conferences publicizing you, a booming yoga page and burgeoning twitter following. You’ve paid back your parents or your credit card bills. Time to hire an assistant to refer everyone to. And get a yoga mat deal. Brand that shit. Talk with Gaiam. Get them to make you some DVDs. If they don’t, move to LA or spend some time there and work with some video outfits there, there’s a ton. Get some DVDs out. Don’t worry about the money. It’s all about having yoga DVDs—no one will use them, but some people will buy them…it’s analogous to being a professor, where you have to publish an academic book that no one reads. Finally, get on yogaglo or GaiamTV. Post a ton of daily videos to youtube. In addition to your sponsorships, get some commercials and iPhone apps going. Your publicist and agent will nail that down. Make sure they do.

10. Finally, in a hotel in Australia where you’re leading a retreat for some yoga studio that’s paying you too much and flying you there and putting you up, have a nervous breakdown. Realize all this means nothing. Just sit with yourself. Learn to meditate. Make friends with yourself. Practice maitri. Practice tonglen. Take a break and go on retreat at a Buddhist center.

Now, you have a choice.

A: And here’s where it gets good: for the ultimate in Spiritual Success, use this breakdown and newfound loneliness and love for oneself as a story in your seminars and classes and videos.

B: Or, learn from the burn out, stick with your loneliness and realize that celebrity is all noise and bullshit.

But don’t quit it…transform it. Use it as a bullhorn to spread the good news about waking up from ourselves, just as you have done. Smile, sadly, and just be yourself and work in service of others. Of course, our ego’s too smart for all that, so keep meditating, allow your mind to reawaken itself, again and again, to the present moment. 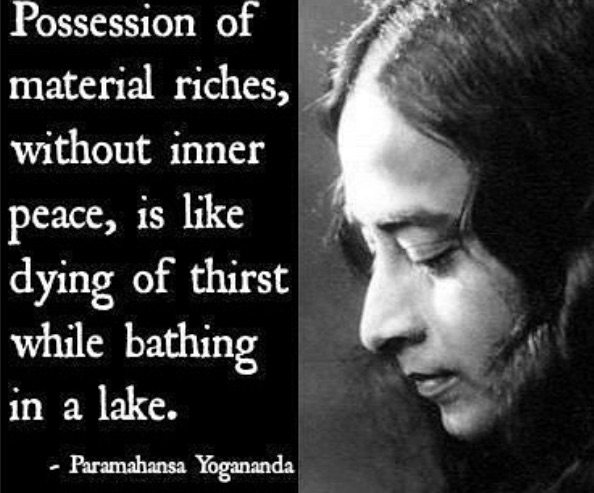 > Bonus: Here’s what to wear and buy.

Here’s some real advice for those of you who are genuinely interested and came here expecting a serious, practical article.

The difference between “Vice” vs. “Onion.” [imgur]