I went to church yesterday for the first time in forever (outside of a Christmas Eve service with my mother; we both love to sing the hymns). My good friend Casey Collins was singing and asked me to do his makeup for a very non-traditional service. The First Unitarian Society of Denver had a gender-bending service that was absolutely joy-filled and hope-inducing. Yes, Unitarian churches are known for their out-of-the-box services that are designed to include all types of people in the worship of God. But I had never heard of a for-real church service where they encouraged everyone to attend as the opposite gender! Having put on Casey’s face for over 10 years I readily agreed and asked to join him for the adventure.

The sermon was not a drag

I was thrilled to dress in male-drag. I have suits that I rarely wear anymore, and doing drag makeup for both genders is a specialty of mine. Not only was it really fun to participate in such an interesting social experiment, it really made my heart sing that a Christian community not only tolerates their gender-alternative congregation members, but celebrates and embraces them for exactly who they are.

Education and familiarity is the basis of understanding

I have always had many good friends who were gay, and my daughter grew up around so many queers and benders that she is truly gender-blind and doesn’t think (or blink) twice at any variation she comes across. This congregation hopes to educate people to do the same.

The service was full of music, stories, and poetry from the opening song “I Feel Pretty” by by Leonard Bernstein & Stephen Sondheim to Casey’s rendition of “(You Make Me Feel Like) A Natural Woman” by Carole King & Gerry Goffin (which made me feel like less of a woman when he hit those high notes!).

The following poem was one of the highlights of the service and  really made my heart sing:

When I was a kid I would sometimes secretly call myself Andrew. Would tug at the crotch of my pants the way only pubescent boys do, ran around pounding on my bare chest like Tarzan. It’s not that I thought I’d grow up to be a man; I just never thought that I’d grow up to be a woman either. From what I could tell neither of those categories fit me, but believe me, I knew from a very young age never to say “Hey dad, this Adam or Eve thing isn’t working for me; I mean, what about all the kinds of people in between?”

In the third grade, Lynnette Lyons asked me where all my Barbies were, lied and told her I’d got in trouble so my mom took ‘em away. I didn’t dare say “Barbies suck, Lynnette! And for that matter, Tommy, so does GI Joe.”

I wanna grow into something none of us has ever seen before, and gender is just one of the ways we’re boxed in and labeled, before we’re ever able to speak who we dream we are, who we believe we’ll become, like drumbeats ever changing their rhythm. I am living today as someone I had not yet become yesterday, and tonight I will borrow only pieces of who I was today to carry with me to tomorrow.

Yes, I like boys who like boys; I like girls who wear toys and girls who don’t; girls who don’t call themselves girls; crew cuts or curls and that really bad hair phase in between. I like steam rising from the body of a one-night stand; I like holding hands for three months before kissing; I like wishing your body was Saturn, my body thousand rings wrapped around you. You wanted to be a Buddhist nun once; last night you held my cervix between your fingers. I thank gods I don’t believe in for your changing. Tell me we’ll be naming our children “Beautiful” and nothing else.

Tell Barbie she can go now. Tell GI Joe to put his gun down and find a boyfriend or a girlfriend or a girl-boy-friend; f*#k it, y’all, GI Joe just needs a friend. I mean, he’s plastic and not even the kind of plastic that bends. I want to bend in a thousand directions like the sun does, like love does, like time stopped so the hands of the clock could hold each other; and we held each other like I held these words for too many years on the tip of my tongue. 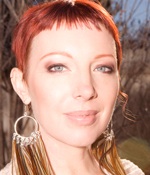 Jen Murphy has an M.A. in Philosophy of Aesthetics, but would rather make beauty in the world than philosophize about it. She is a makeup artist and a writer on sustainable an… Read full bio