God, The Divine Other.

“A theme revealed in nearly every spiritual path, if you dig deeply enough.”

There is a place where we feel nothing but our edges.

There is also a place beyond that where we no longer feel our edges, having totally surpassed them, completely enmeshed with the divine.

It can be envisioned as coming home to a love absolutely all encompassing, complete and total. It is the ultimate surrender of self and ego; any shred of awareness of self as anything other than part of the divine no longer exists.

This is a theme revealed in nearly every spiritual path, if you dig deeply enough. The ecstatic traditions of India have many examples of those who have given themselves entirely to the seeking of not only the transcendence of the human experience, but the ultimate desire for emergence with the Divine.

Throughout the ages, the Christian faith has also had its share of mystics, those seekers who come to know God in a personal sense. Some of the foremost amongst those are St. Teresa of Avila, St. John of the Cross, and St. Hildegard of Bingen.

There are a number of Christian sects and Catholic traditions that are given to the ecstatic worship of the divine, many of which survive even to this day. Many of the mystic Christians were also ecstatics, and the fervor with which they gave themselves to God more than bordered on the sexual.

“Only in God is everything pure, beautiful, and holy; fortunately we can dwell in Him even in our exile! But my Master’s happiness is mine, and I surrender myself to Him so He can do whatever He wants in me.”  ~ Blessed Elizabeth of the Trinity in a personal letter.

Centuries earlier, the piece below was written by St. John of the Cross.

Bride
1. Where have you hidden,
Beloved, and left me moaning?
You fled like the stag
after wounding me;
I went out calling you, but you were gone.

2. Shepherds, you who go
up through the sheepfolds to the hill,
if by chance you see
him I love most,
tell him I am sick, I suffer, and I die.
~ Excerpted from The Spiritual Canticle by Saint John of the Cross.

In a later stanza Christ is represented as the Bridegroom as he replies to the Bride, who in this case represents the seeker, and quite likely St. John himself:

22. The bride has entered
the sweet garden of her desire,
and she rests in delight,
laying her neck
on the gentle arms of her Beloved.

23. Beneath the apple tree:
there I took you for my own,
there I offered you my hand,
and restored you…
~ Excerpted from The Spiritual Canticle by Saint John of the Cross.

St. John was a Carmelite Brother and friend to Teresa of Avila, also known as Teresa of Jesus, who had a rather intense relationship with God as well.

“I saw an angel beside me toward the left side, in bodily form. I saw in his hands a long dart of gold, and at the end of the iron there seemed to me to be a little fire. This I thought he thrust through my heart several times, and that it reached my very entrails. As he withdrew it, I thought it brought them with it, and left me all burning with a great love of God. So great was the pain, that it made me give those moans; and so utter the sweetness that this sharpest of pains gave me, that there was no wanting it to stop, nor is there any contenting of the soul with less than God”

1. “I am a rose of Sharon, a rose of the valleys.”
2. “As a rose among the thorns, so is my beloved among the daughters.”
3. “As an apple tree among the trees of the forest, so is my beloved among the sons; in his shade I delighted and sat, and his fruit was sweet to my palate.
4. He brought me to the banquet hall, and his attraction to me [was symbolic of his] love.
5. Sustain me with flagons of wine, spread my bed with apples, for I am lovesick.
6. His left hand was under my head, and his right hand would embrace me.
~Old Testament, excerpted from chapter two of Song of Solomon.

In Hindu Shaktism, and in some sects of Shaivism, this same dance is seen as the dance between Shiva and Shakti.

Shiva: One of the three most visible gods in Hinduism, along with Brahma and Vishnu. Shiva is the destroying aspect.
Shakti: Energy of the universe, also a face of the Divine Mother in Hinduism.
Shaktism: A branch of Hindu belief that holds the Divine Mother as the highest form of divinity, with all other forms being emanations of Her.
Shaivism: The worship of Shiva.
Bhakti: Spiritual devotion based in total love.
Mirabai: Known as the Mad Princess and The One Who Danced for Krishna among other names, Mirabai is remembered for her devotional poetry and her ceaseless seeking of Lord Krishna. Mirabai is considered to have achieved emergence with Her Lord.
Krishna: A Hindu deity known to be the eight avatar of Vishnu. Krishna is known by many names.
Rumi: Sufi mystic and teacher. One of the most well-known of the devotional poets, Rumi’s poetry reaches intense depths and heights of both pain and ecstasy.
Shamz/Shams i Tabriz: Rumi’s teacher and spiritual guide. Much of Rumi’s poetry is written for Shamz.

Suffice it to say that for thousands of years this dance of love has been chronicled as a sacred act. With her ceaseless seeking for union with her beloved Krishna, Mirabai is part of this dance as seen in her sacred devotional Bhakti writings. It is voiced in the longing of Rumi for Shamz. It is echoed in the gasping cries of Saint Teresa in the throes of her ecstasies.

Mystics of any tradition tend to recognize that no religion has a corner on the “truth” market, even where the religious books and sectarian interpretations may reflect a sense of “The One Right and True path.”  Beyond the question of truth and belief, there are also the generations of conditioning regarding our bodies, sex, and the beingness of the human condition.

Many religions separate exactly the things I am encouraging the reunification of—body and spirit, sex and worship, humanity and divinity.

Some seek enlightenment through asceticism, some through indulgence. Those of us who have tried both routes know that there are more similarities between the two approaches than there are differences much of the time. Whether fasting and praying or feasting and praying, the heightened state of awareness that results can be much the same.

We can loose ourselves in divine madness either way. It is possible to turn our consciousness to oneness with a thought. Beyond that, the rest is just technique.

On the path of the mystic, we come to know that there are as many roads to the Perfect State of Being as there are people to walk upon those roads. We know that the destination is the same, regardless of the route.

This longed-for and constantly occurring state has been called nirvana, enlightenment, attainment, transcendence, the Mystical Marriage, rapture, and ekstasis (ecstasy), among other things.

On the human level, God is not any one of us but God is, perhaps, in all of us. More accurately, we are in God—not a single part of anything is separate from the all that is. If the word “God” is sticking in your craw, call it Spirit, or the Divine Spark, or whatever you like to call it. It! 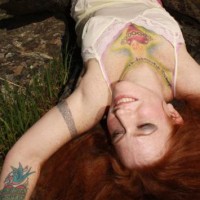