A Sneak Peek from Shambhala Sun: What’s the Music All About?

I was nine years old and it was after school—a snowy Tuesday in January, 1983.

The sidewalk was covered in salt and ice, and the three women at the corner were wearing sandals, hospital-issue green pants, and only one had a coat—maroon, stained, and far too small.

She recognized me and ushered me over the slippery streetcar tracks and into what was the main foyer of Canada’s largest mental health institution, 999 Queen street west in downtown Toronto. I thought I heard he’s waiting for you, but the woman was also mumbling something else to the streetcar driver, her pointed cigarette holding up the traffic for me.

I made my way through the main hallway where the nurses buzzed me in and I took the stairs to the second foyer in the northwest ward, the only ward with hallways that were clean. The green paint was peeling from the walls by the washroom and the metal corners of the drywall were cracked. I found my uncle waiting on a blue chair, smoking under an oversized clock. I wondered if he’d been waiting in that spot all day. His thin right leg was crossed over his left and then wrapped all the way around his ankle, as if his legs were made of string. He got up quickly and walked me to another smoking lounge, this one with a stereo and meditation supplies. The windows were filthy.

“I know. I see it too, Michael. Here, help me with the records.”

I pushed two milk-crates of records against the stereo cabinet and lifted out the worn copy of The Beatles’ White Album with the name Ian written on its blank white cover, and a copy of the Bhagavad Gita, which my uncle referred to as “yoga.” Above the stereo were two cartons of cigarettes, a collection of wasted lighters, a lamp with no bulb, and a book called the Dhammapada. I had no idea who the Buddha was but it didn’t matter; everything my uncle read seemed true. True, not because he told me it was true, but because he wanted me to think about it.

“Did you get a new book?” I asked, sounding out the word,
dha-ma-pa-da.

“It’s the teachings of the Buddha. When we finish the Gita,
we’ll read it. Maybe the Buddha is clearer about not being asleep. His basic stance is that if you can let go of what you are holding on to too tightly, things will be a lot more peaceful.”

Ian put on the White Album, placed an ashtray on the left-hand speaker, and announced, “This side is the drums and bass.”

We angled our blue chairs to face the left speaker. Then he lit a cigarette (there was no incense allowed in the hospital) and balanced the cigarette on the rim of the burned plastic ashtray. The trail of smoke rose toward the ceiling lights. Ten or 15 other patients were sitting in the room with us, but I only noticed Ian. It felt like we’d been here since I was born. I felt normal here. I liked watching him. He sat so still listening to records, reading, drinking water. He always wanted to know what I thought and it made me feel like what I thought mattered. When I sat there with him I had enough space to think. Sometimes I could actually see the thoughts themselves lifting off of a giant unrolled banner of language and then when I had a thought I could see it go all the way down again, down onto the same dark ribbon.

As the music began we watched the rising smoke ripple into shapes above the speaker. Every drumbeat created a break in the smoke stream and the bass line made circles. Visible sound. We listened to the whole record like this.

The doctors left us alone because Ian could get all the ward’s inpatients perfectly still for an hour. Whenever I saw Dr. Walker he winked and asked me how old I was. I saw him doing some computation in his eyes but I had no clue what he thought. My grandmother had told him I’d be coming to visit Ian more regularly after school.

When the record ended, we switched to the other side of the room and listened to the vocal tracks in the other speaker. John Lennon sang about revolution. The air was thick with smoke. The nurses came in to check on me. Two of Ian’s friends, both named Paul, turned the lights off. There was some shuffling as we moved our chairs over to the right-hand side of the speaker. Another cigarette was lit and placed on the ashtray.

“In stereo,” Ian said, “you get it twice. And it doesn’t have to
be at the same time. You can separate the sounds. One speaker at
a time. One instrument at a time. Listen to the vocals. Study the
words. Listen to John Lennon sing one line at a time. What’s he
really singing about? He’s singing to you.”

When the record ended, Paul and Paul moved some chairs around. Then Ian took out the Bhagavad Gita and we read together, out loud. It was kind of like synagogue. I watched the snow falling outside and wondered why nobody cleaned the windows. I listened to the same opening lines I knew almost by heart:

Arjuna saw fathers-in-law, companions,
In the two armies,
And contemplated
All his kinsmen, arrayed.

The Bhagavad Gita is a seminal text on yogic philosophy and a literary tour de force. It’s about a dialogue between a warrior named Arjuna and his charioteer, Krishna, in the midst of a fratricidal war. Over 18 chapters, Arjuna learns from Krishna how to take action in a war that his family considers just, but that his heart cannot commit to. This eternal dilemma—how to navigate impossible choices, how to take ethical action in the midst of great violence—is the focus of the dialogue and was also the focus of my endless debates with Uncle Ian.

“Why does he have to fight?” I asked.

Part 2 of Michael’s article will be posted soon! 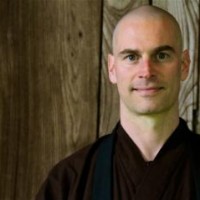