What Does It Take To Be Courageous? ~ The Four Desires Virtual Book Club.

Chapter 19: The Courage to Change

Lets face it; we don’t like change.  We will grow old, yet we do everything in our power to keep looking young. We complain about how our relationships are not like they were in the beginning and even how we used to be able to “get into” a specific yoga asana (pose).

Chapter 19 reminds me of a one of my students. She had been very dedicated to her personal practice and was feeling great. A few months later her knee began to bother her and after seeing a few doctors, she eventually had knee surgery.  Afterwards, she was upset that her yoga practice was not “what it used to be.” Not surprisingly, her sankalpa at the time was to “slow down.”

Why is it that we resist change? Change is scary for all of us; in order to face it we need courage.  We needn’t look any further than ourselves for this strength.  In my experience, it is belief in your Self and trust in something higher, that is the most challenging. When I feel supported and able to trust in what I know, then things begin to open up and change begins to feel more like blossoming rather than turbulence.

“True growth requires you to clear your own path.” ~ Rod Stryker

My student eventually realized that she would need to adapt, adjust her yoga practice and begin to embrace her present situation. I truly believe that because she had the intention of connecting with her dhi, the courage to welcome this

transition was much smoother.

The “forty-eight hours of fearless action” exercise in The Four Desires is a consistent connection with dhi in every part of your day. You act from that inner voice. If it tells you to “close the computer” you do, to “practice nidra” you get your socks out, to “be kinder to your partner” you act on it!  Rod suggests that you only do this exercise if you feel confident in your inner voice. This ensures that you will be acting from your buddhi as opposed to the reactive mind.

The Hatha Yoga Pradiprika says that we have six obstacles in the way of our yogic success. The first four are pretty obvious: overeating, overexertion, talkativeness and unsteadiness. The next two are very interesting, especially when we start to look at them in the context of this 48 hour exercise. They are: being in the company of common people and adhering to rules.

Avoiding the company of common people, doesn’t mean to put your self up on a pedestal or go hide in a cave. “ The only common people are those who have not yet found the courage to live as their uncommon selves” ~ Rod Stryker. When we listen to our inner self, it is anything but common.  It takes courage not only to hear your inner guide, but to act on it as well.

Coupled with “avoiding common people” is “not following all the rules.” When you practice the 48 hour exercise, observe how often you limit your courage, freedom and inner creativity by adhering to your own habits and rules.

Perhaps one of the most limiting sets of rules include many social norms and beliefs we all unquestioningly take for granted. For instance, having a certain appearance as a woman/man, continuing the career you spent 5 years in college for, or maintaining a certain status when you can’t afford to. We could keep adding to this list. These are some examples of social rules that I had to question and break in order to be more fulfilled within. We can also look back in history and see changes in control, the evolution of cities and cultures around the world thanks to one or more individuals not adhering to the rules.

Following your own inner voice for 48 hours, is supremely validating. It not only takes you directly to the present moment, but makes you listen and act. When we act on inner guidance (even if it is breaking the rules) or skip out on the common folks, we reinforce our courage. In turn it becomes stronger, more available, and eventually you start to act more form your dhi, and less from the reactive mind.

This week I want to hear all about your experience with this exercise. Did you act from dhi or did you catch yourself falling in the grips of the reactive mind?

Learn more about Rod Stryker and ParaYoga at RodStryker.com
Read The Four Desires book review on Elephant Journal.
The Four Desires: YouTube talks with Rod Stryker
Read other discussions about The Four Desires
Instructions: How the book club works
Rod Stryker travels to the largest spiritual pilgrimage in history in 2013. I’ll be there. Will you? 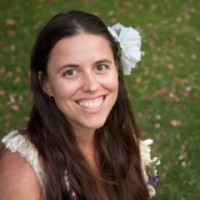 As a traveler and painter Chanti has grounded her roots in the path of yoga wherever she has landed. Chanti began practicing Yoga during her first year in college & conti… Read full bio