An American in Dubai.

Is Dubai the Middle East?

Whenever I’m back in the United States and I tell people that my wife and I are living in the Middle East, their reactions vary greatly. A lot of it, I suppose, depends on how exactly I state things.

If I say, “My wife and I live in the Middle East,” the typical reaction is a raised eyebrow and a creased brow. As they slowly nod with an attempt at politeness, I can almost see the images of Arab men waving Ak-47s in a dusty desert while their covered women ululate (Arabic yodeling) flash through their minds.

What they usually ask is, “So, how is it over there?”  What they really want to ask is, “Why would you willingly move to that hell hole?”

If, on the other hand, I tell them, “My wife and I live in Dubai,” their reaction is quite different. “Wow!” is probably the most common response and people invariably want to know about the tallest building in the world, the indoor ski-lodge, the man-made islands with their glittering hotels, the gleaming ultra-fast cars, and, of course, the money.

The very name Dubai tends to evoke a bejeweled exoticism.

So the question is: in which of these two scenarios do I live?

Is it the dry, dusty, rubble-filled landscape trodden upon by poor laborers on bikes stacked with cardboard boxes and who sleep eight to a room? Or is it the sheik play-land (pun intended since “sheik” is also the Arabic term for the patriarch of the tribe) filled with succulent delicacies from around the world?

The truth? It’s both and it’s neither of these stereotypes. Perhaps this is why it is the strangest place I have ever experienced in many ways.

When I was in China last year and got served up a nice plate of donkey sausage after cruising through the frantic meat markets of Shanghai, I thought to myself, “Now this is some crazy shit!” Even still, it was not as strange as it is here in Dubai. Without a doubt it was more foreign to me, and yet it was simply China.

What makes this the strangest place I have ever experienced is its completely confused, nearly schizophrenic identity.

Having only become an official country in 1971 after the discovery of oil, the United Arab Emirates (home to Dubai) changed so quickly that it resulted in incredible growing pains and stretch marks.

People literally went from camel herders and pearl divers to millionaires in the blink of an eye.

As you can imagine, that type of instant status and lifestyle change came at a price. It was difficult to teach children work ethic when children and even their parents no longer needed to work.

It was difficult to hang onto traditions like falcon hunting and camel husbandry when freighters began arriving with every type of cuisine desirable and luxury sedans.

Even cultural norms became difficult to maintain as wealth allowed for travel to all parts of the word, studying abroad, and a hoard of expatriates and immigrants flooding into the country to either manage businesses or be the labor for such ventures (locals now make up less than 12% of the country).

So, what they ended up with is a very strange place, a place torn between tradition and modernization, cultural unity and a melting pot, dogmatic religion and modern day skepticism.

I teach writing at an American University just outside of Dubai. I play poker twice a month with an Englishman, two guys from Taiwan, a Serbian raised in New Jersey, a Syrian (though he observes more than plays since gambling is against his religion), and a smattering of other guests from a handful of nations.

The students in my classes, mostly from the gulf regions, have taught me much about Islam and their cultures. Much of the time, the lessons I learn are incredibly different than the biased perspectives shown on the news in the good’ol USA.

Other times, however, when I hear stories like a recent one from Saudi where young women were trapped in a burning dormitory by religious leaders rather than being allowed to escape in “immodest dress,” the lessons make me badly miss my home in California.

The weather is gorgeous in the winter (nearly tropical) and hellish in the summer (temperatures as high as 54 degrees Celsius—129 Farenheit). Last summer, I actually fried an egg on the sidewalk just to see if that was bullshit or not. It worked. Contrary to popular belief, it can be intensely humid here as we are nestled right on the coast of the Persian Gulf.

As far as the camels vs. luxury hotels go? We’ve got it all. I live on a heavily watered, tree filled, gated University campus filled with palatial structures and fountains. If you drive ten minutes away, the palm trees and lawn give way to rubble piles, litter, the occasional wandering camel (that part is true) and long stretches of sandy, scarred land.

Usually in these places you’ll find groups of foreign laborers, Pakistanis and Indians mostly, playing cricket or simply loitering about the freeway. We are never quite sure what they’re up to, but you’re liable to run across one of these guys almost anywhere in the country—even out in the middle of the desert.

They’ve left their wives and children behind and sleep eight to a room in labor camps.

Keep driving and you’ll arrive into Dubai where the rubble piles give way to a breathtaking landscape of glittering skyscrapers blinking with elegance.

It was here, with a group of fourteen co-workers, that we spent $75 dollars a plate on our Christmas dinner last year, dining at a buffet which offered rarities ranging from elk meat to specialty Japanese eel, all nestled beneath ice sculptures depicting Christmas characters. And of course, that price included all the alcohol we could drink.

Meanwhile, a few blocks away in the Dubai Mall, fully covered women walk side by side with freckled Australian girls in tight-fitting tank tops.

I want to tell you what it was like to have a young Indian doctor yell at my wife to quit crying while we watched as she lost our little baby.

What it was like to have a surprise birthday party and be surrounded by new friends who, like us, are far from home and with whom we’ve grown incredibly close.

What it was like to find myself atop a camel and to laugh as I peered down at the small boys cheering and giggling at my awkward riding stance.

What it’s like to float in the warm waters of the Persian Gulf beneath the full moon at midnight and hear the haunting call to prayer.

What it was like to see a grown man be mistreated by a teenage kid and for me to be terrified to say something lest I be deported or arrested.

What it was like to have my grandfather die and have no realistic options for making the 24 hour journey home.

What it was like to have the luxury to visit France, China, Bali, Greece, Turkey, and Prague all within two years.

This is my schizophrenic world living in the Middle East—or, should I say Dubai? 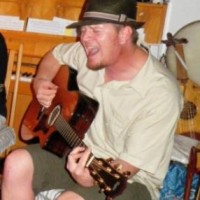 Adrian Mateo Z. is a life long traveler who currently resides in the deep desert of the United Arab Emirates, where he teaches composition at an American University. You can e… Read full bio