April Is the Cruelest Month.

“April is the cruelest month, breeding
Lilacs out of the dead land, mixing
Memory and desire, stirring
Dull roots with spring rain.”

Every year around this time, I reflect on the famous lines from T.S. Eliot’s famous poem, The Wasteland. As the weather becomes warmer and we are called out of our wintry cocoons, the still introspection of winter gives way to the bright action and expressiveness of spring.

We feel our own lives with vividness that we seemed impervious to, even as we made our New Year’s resolutions months earlier. In January, we wanted to create a change; in April, we know that we must.

Despite the edict of Pope Gregory XIII in 1582, I dare say that April is really when the New Year starts. Indeed, it used to be. Look up the origin’s of April Fool’s day and you will discover this.

No matter how the Catholic church may have institutionalized the change to January 1st, we humans still intuitively know that this time, right now, is our true New Years.

Certainly this is the time of the year that collectively seems like the most fertile time for enacting true and lasting resolutions. For many of us, we do just that.

Winter is done and we begin to see our lives in a kind of clear resolution. Things that, in the past, may have been unsatisfying, at this time, they become downright unbearable. In the winter, we felt as if we could tolerate the mild unpleasantness of that job, relationship, or life circumstance.

But now, in the light of Spring and its warmer and longer days, we feel empowered. We are able to finally say “No more! I deserve better than this!” It is a time of reclaiming the power that we gave away in the past. We may not know what the change will look like, only that it must happen.

This is the Passover Story written in big letters for each of us. Just as the Israelites left the oppressive slavery of Egypt, so do we cast off the shackles of a life that we once thought was the only life we could ever have.

We set out into the uncharted wilderness of the future. We may be scared. We may feel vulnerable and uncertain about what tomorrow will bring but we know that we must go forward into it.

I have nothing to offer but anecdotal evidence here, although from what I’ve noticed in my short time on earth, this is the season that most divorces and breakups seem to happen. Of course, this makes sense.

As we grow into the fullness of ourselves, old relationships that may have nurtured us warmly in the past, now seem several sizes too small.

No longer content to just have a warm body next to us, we start to seek passion and fire, or at the very least, freedom from the dependence on another person to make us feel whole.

And it’s true what Eliot says, there does seem to be a cruelty in all of it. Hearts are broken.  Relationships are shattered and in these breakups, inevitably one or both people feel the pain of saying goodbye.

But say goodbye we must, as life consistently calls us to stop playing ourselves small. April is here. It is time.

So remember that no matter what you are feeling called to leave behind—a job, a relationship, or just an old habit or lifestyle that no longer serves the best in you—take courage that out of the ashes of the past, the lilacs will bloom brighter than ever for all of us.

And, as a last thought, if you should be the one who is left broken-hearted, staring in wide-eyed shock and numbness at a Dear John/Jane letter in the coming days, even if he/she quotes some little essay that they read in Elephant Journal, don’t blame me…

But, as those wise sages Milli and Vanilli once said, “Blame it on the rain.”

Matt Kapinus can be found every week teaching at Yoga Pod in Boulder, Colorado. 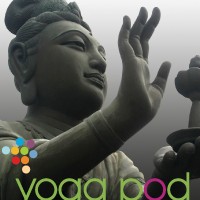 The YogaPod is nestled at the base of the Flatirons in Boulder, Colorado, located at the 29th Street Mall. The YogaPod Mission is to create a sanctuary of peace where each st… Read full bio