Letter to the Divine Mother.

Rooted. Listening. One. (By Madison Maross)

I recently wrote this letter to my mother. Afterwards, I realized how universal the message is. I thought I would share it as it speaks to the healing relationship of our collective feminine spirit—our relationship as lovers, mothers, daughters and inhabitants of mother Earth—in this age of transformation.

Thank you for the call and the birthday wishes. I, too, hope you are doing well.

I’m writing to you now because I am confronting my fears and want to express the things I have been holding in for years and years. Not for the sake of our relationship, but for the sake of you and I, as individual divine women who deserve and are so much more than our stored anger.

I learned from you that money was also to be feared, and that the worthiness of it was not earned, it was f*cked or begged.

I learned from you that nourishment did not come from the inside, but from the external where it was typically inhibited by the oppression of the industrialized masochistic world we were born into. I learned from you that communication was solely either praise or criticism, and that love was dependency…only causing suffering in the end.

I learned from you that death was around the corner, and life was not worth living…that intrinsic joy was only fantasy.

Therefore, I learned from you to abuse, not nourish.

As a child, I learned all of this without being conscious of it. I learned it with admiration for my heroes, my parents. As a child, this served my creativity as a survival mechanism. As an adult, it serves only two things—the challenge to change, and the ability to empathize this all-so-common story.

With that said, I know that you similarly learned and conditioned this unconsciously as a child. Feeling victimized by the abuse and oppression, you felt it impossible to get somewhere from nothing. I know your conflict between your spirit and your intellect caused you pain, as did the fear of your own potential. I know that you thought perhaps your only chance was to raise successful children and to love them to the best of your ability. I know you always thought you were doing the best you could. I also know what an intuitive, intelligent, and empathetic woman you are, and that I learned that from you as well.

My anger is not towards you or because of anything you “did” to me—it is anger at how you showed me how to love oneself. I’m expressing this to you now because I am learning how to honor and nourish myself. I’m learning to grow roots, even though, as I do, I won’t be able to run away. I intend to confront my fears so that I can tell a new story and live in love, rather than in fear of myself.

Lastly, along with my anger, I also want to express my forgiveness. I realize that forgiving myself and forgiving you are not only related but an integral part of the transformation from victim to warrior, and that anger and forgiveness are deadweights until they are expressed inseparably in gratitude.

I wanted you to know this so that you understand the reason behind my separation and evolution, and so that you know that if we are to ever have a relationship it will be a re-created relationship, not one based in the past, and that this will not happen until both of us are ready for and open to that.

Currently, I am sitting on my porch at the co-op where I live, enjoying the beautiful California day. Our studio will be closing within the next couple of months, and amidst a big life and career transition, I will spend the afternoon searching for and applying for jobs before I ride my bike to go teach some dance classes. I am two months into a one-year-engagement path with a wonderful man and am deeply involved in my yoga/spiritual practice, where I am learning about intention, commitment, discipline and truth.

Life is challenging, but good, and the more I learn, the more I realize that the less I know. Surrendering to that is hard, but feels oh, so good.

I hope this letter reaches you on a lovely day and I truly appreciate you taking the time to read if you have. 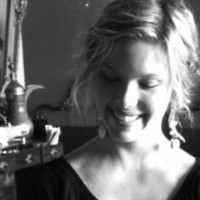 Madison Moross is a dancer, writer, yogini and amateur activist. She is part of The Big P (picture) Project and the co-founder of Radiance Movement, both projects aimed at rev… Read full bio