Something of Value: Celebrating the Movies of Richard Brooks on His Centennial.

“Columbus would still be in Spain, if they waited for preview cards.”

Something of Value, the title of a 1957 film by Richard Brooks, aptly describes the legacy of this tough, uncompromising professional who hit his stride in the 1950s and 1960s with a string of films that brought Oscar recognition for himself and those he directed. Individuals and their choices mattered, each of his films seemed to say, and in bringing his view of the human condition to the screen he proudly wore the scars of countless creative battles.

The material—the original short stories, novels and plays that, more often than not, drew his attention, as well as his perceptions of how to translate them to a visual medium—was what counted. Audience research be damned.

This month marks the centennial of the birth of this director-screenwriter, a key figure in the transition from the factory-driven product of Hollywood’s studio system to the modern era of independent professionals.

He was nominated for an Oscar six times and won once. His best films—The Blackboard Jungle, Cat on a Hot Tin Roof, Elmer Gantry, Sweet Bird of Youth, The Professionals, and In Cold Blood—were wrested from a methodical creative process. Those studio execs, crew, or cast members who didn’t buy into that process could expect an earful of buckshot. (Just ask Glenn Ford, who complained that he didn’t want his schoolteacher in The Blackboard Jungle to have the same kind of military buzz cut hairstyle preferred by Brooks—only to lose more of his thick, wavy hair as the argument went on).

Journalism was Brooks’ initial calling, and his cinema, like his prose, rested on flinty storytelling. That perfectly meshed with the worldview of several key collaborators in the early part of his career, including producer Mark Hellinger, who perhaps saw something of his himself—the Jewish parentage, the same newspaper-driven urge to get the true story—when he employed the young Brooks on an adaptation of the Ernest Hemingway short story “The Killers;” John Huston, who, in an unusual and generous move, allowed Brooks to witness the shooting of his script for the gangster film Key Largo; Humphrey Bogart, who went on to star in that classic and two other films scripted by Brooks, Deadline U.S.A. and Battle Circus; and Burt Lancaster, for whom Brooks wrote a career-launching role (doomed boxer Ol’ Andresen in The Killers) and a career-defining one (the Oscar-winning Elmer Gantry).

Having cut his teeth writing for such movies as Key Largo (1948), and Any Number Can Play (1949), Brooks was finally given a chance to direct as well with the Cary Grant film Crisis (1950). Over the next two decades, he wrote or directed films that, while mostly dispensing with showy camera angles, were direct and compelling. While laboring for studios (especially MGM) in the early part of his career, he turned independent after 1960.

You won’t find Brooks’ name linked with Ford, Minnelli, Wilder, or Scorsese as a giant of the screen. True, his work was not especially innovative. But more damaging was that his films of the Seventies and Eighties (Looking for Mr. Goodbar, Wrong is Right, Fever Pitch) led critics to forget his peak years, and his willingness to cross genres often required that he suit his method to his material.

But if you want to understand how Hollywood pushed the boundaries of what was considered permissible—even possible–Brooks’ name has to come up in the conversation.

Filmmakers in the 50s and 60s existed in a space that had become unexpectedly freer than before, but which still allowed not as much creative liberty as they wished. All-powerful studio moguls were increasingly endangered species, courtesy of a 1948 anti-trust verdict against the industry by the Supreme Court and television’s increasing presence in homes.

Court rulings in obscenity cases had also opened up a window for filmmakers to create material more sexually frank than in the past. But the production code governing movie censorship, backed informally by still-strict contemporary mores, still constricted what could be shown in theaters.

Brooks was in the vanguard, along with contemporary directors such as Otto Preminger and Elia Kazan, of those who sought greater artistic freedom. With vision and vigor, he fought often multi-year battles to bring to the screen properties once considered unthinkable.

A talk with Sinclair Lewis, for instance, led the aging, alcoholic Nobel laureate to give the young writer carte blanche in adapting Elmer Gantry, advising him in particular to read H. L. Mencken for especially perceptive criticism. Brooks then spent several years trying to figure out how the elements that had made this 1927 novel taboo—intolerance, chicanery and sex in an evangelical ministry—could be a) made palatable enough to pass muster with the censors, and b) fashioned into a suitable vehicle for Lancaster. His success at that effort can be gauged by its Oscar wins for star (Best Actor) and Brooks (Best Adapted Screenplay).

Yet despite this triumph, Brooks felt the ending had pulled its punches. He might have succeeded in putting a huckster minister before audiences—a prospect once so fraught that for three decades, not a studio in town would finance the project—but he couldn’t get past the censors Lancaster’s closing zinger as he walks away from the fire that destroys his ministry: “See you in hell, brother.” The censors believed it showed Gantry was unreformed; Brooks countered that the preacher was recognizing his damnation for past acts. Brooks lost that particular battle.

Brooks was more persuasive with his female lead, Jean Simmons, who not only turned in one of her most complex, accomplished performances but married the director. In 1969, he directed her to an Oscar nomination in The Happy Ending—which, in its story of a marriage that ends unhappily, turned out to be prophetic about her union with the director.

Similarly, for his Tennessee Williams adaptations, Cat on a Hot Tin Roof (1958) and Sweet Bird of Youth (1962), Brooks was able to film some of the raciest elements ever to make it into a mainstream motion picture, but his inability to circumvent the censors by depicting some motifs from the Williams plays (e.g., homosexuality, castration) diluted the power of what many critics saw on the big screen.

Brooks could be rough with actors, even striking one in the face, in a “this-hurts-me-more-than-it-hurts-you” moment, to elicit the shocked reaction he wanted (and it worked). But one of the most consistent motifs of his substantial filmography is his scorn for the bully, the thug, and the incipient fascist, whether a teenage gang leader (The Blackboard Jungle), a Southern political boss (Sweet Bird of Youth, providing Ed Begley with a Best Supporting Actor Oscar), a Ku Klux Klan leader (Storm Warning), two partners in an inexplicable killing of a family in the American Heartland (In Cold Blood), and a mobster on vacation (Key Largo, with Edward G. Robinson clashing with Humphrey Bogart’s disillusioned war vet—a metaphor for the stand that Brooks and Huston wished Hollywood to make against the Red Scare).

In an interview included in Backstory 2: Interviews with Screenwriters of the 1940s and 1950s, edited by Patrick McGilligan, Brooks bemoaned the lack of humanism in the texture of movies anymore. His own, he explained, tried to express hope, the difference between man and the animals: “Sex is a tremendous drive, and love, but that is not enough. People have to care about each other, too. Then the picture means something. People care when someone reaches a hand out to someone. Then you begin to care about the movie, whether you know it or not.”

The movies are a crap shoot, and even Brooks couldn’t turn such fine properties as F. Scott Fitzgerald’s short story “Babylon Revisited” (adapted as The Last Time I Saw Paris) or Joseph Conrad’s novel Lord Jim into successful features. But more often than not, this talented taskmaster brought consummate skill to his projects as he applied the motto that appears on his tombstone: “First comes the word.” 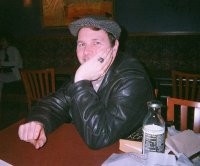 Michael Tubridy has worked for the past two decades for a New York-based, not-for-profit trade association, where he has served as a librarian and, more recently, managing edi… Read full bio