The Kingdom of God is Within You.

The Kingdom of God is Within You.

You may not have heard of this little known book—an inspiration for Gandhi—written by Leo Tolstoy in 1893. If you are of an open mind and ready to receive Baba Tolstoy’s work, then it’s time you get a copy.

The book is Tolstoy’s non-fiction opus that shoots down Christianity and government in an argument showing the essence of Christ and true service to humanity has been lost in both corrupted institutions. The Kingdom of God is Within You was initially banned in Russia.

It’s time to do away with religion and government, Tolstoy says. There is no fixing what is tainted from the foundation up. It’s time to start anew.

“Strange as it may seem, the churches as churches have always been, and cannot but be, institutions not only alien in spirit to Christ’s teaching, but even directly antagonistic to it…One represents pride, violence, self-assertion, stagnation, and death; the other meekness, penitence, humility, progress, and life.”

The book could have been written this year, that’s how relevant it is to our time and sadly, how little has changed in the mind of mankind in the past 119 years.

But perhaps we are on the verge of a Christ/Buddha consciousness shift, perhaps the world is finally ready to awaken. I look at my Facebook newsfeed and from the quotes I see people posting, it seems like we are. Documentaries such as Thrive and I Am also point to a consciousness shift in man.

Tolstoy says that mankind is in a state where we are going through the motions of what has been ingrained in society as necessary and “right behavior” though at our center we know it to be false—soldiers going to war, armed policemen firing when provoked or put “in fear of their life,” and the rich crushing the poor to gain their fortunes then doing some philanthropy as a penance that never matches up.

We all know there’s something wrong, we just cling to the old system out of fear of the unknown. In our heart of hearts we all know violence is wrong, under all circumstances. There is no just war. There is no reason to kill. It’s time to evolve.

Politicians are not heroes. We all know they are crooks. The news is poison candy for idle minds. Think for yourself.

“There is no one today who does not see the uselessness and injustice of collecting taxes from the toiling masses to enrich idle officials; or the senselessness of inflicting punishments on weak or depraved persons in the shape of transportation from one place to another, or of imprisonment in a fortress where, living in security and indolence, they only become weaker and more depraved; or the worse than useless and injustice, the positive insanity and barbarity of preparations for war and of wars, causing devastation and ruin, and having no kind of justification.”

Miracles happen gradually. All the sages and saints throughout time have said, “Know thyself” and “If you want to change the world change yourself.” Outward protest is not the method to accomplish this. Introspection is. From our center is where true evolution rises. It’s hard to say what will help administer this epiphany.

Some people are already there, perhaps through past karmas, they have an elevated consciousness. Some may be ready to train themselves to meditate. Some may need a heroic dose of psychedelics during a shamanic ceremony to open their doors of perception.

It’s a matter of seeing ourselves not as individuals, but as an interconnected life force. Knowing in our DNA that if I hurt my neighbor, I hurt myself. If I help this stranger, I help myself. In this respect, be selfish!

“Christianity recognizes love of self, of family, of nation, and of humanity, and not only of humanity, but of everything living, everything existing; it recognizes the necessity of an infinite extension of the sphere of love. But the object of this love is not found outside self in societies of individuals, nor in the external world, but within self, in the divine self whose essence is that very love.”

We are living in opposition to our true nature, which is love. This is why so many soldiers get post-traumatic stress disorder. War itself is a disorder!

“People are astonished that every year there are sixty thousand cases of suicide in Europe…but one ought rather to be surprised that there are so few. Every man of the present day, if we go deep enough into the contradiction between his conscience and his life, is in a state of despair.”

In Tolstoy’s book he quotes writer Alexander Ivanovich Herzen, who addressed society’s problem half a century before Leo did.

“If you are content with the old world, try to preserve it, it is very sick and cannot hold out much longer. But if you cannot bear to live in everlasting dissonance between your beliefs and your life, thinking one thing and doing another, get out of the medieval whited sepulchers and face your fears. I know it is not easy.

“It is not a little thing to cut one’s self off from all to which man has been accustomed from birth, with which he has grown up to maturity. Men are ready for tremendous sacrifices, but not for those which life demands of them. Are they ready to sacrifice modern civilization, their manner of life, their religion, the received conventional morality?

“Are we ready to give up all the results we have attained with such effort, results of which we have been boasting for three centuries; to give up every convenience and charm of our existence, to prefer savage youth to the senile decay of civilization, to pull down the palace raised for us by our ancestors only for pleasure of having a hand in the founding of a new house, which will doubtless be built long after we are gone?”

The answer should be a resounding yes.

“The one aim of your life ought to be to purify yourself from falsehood and to confess the truth. And you need only do that and your situation will change directly itself.

“There is one thing, and only one thing, in which it is granted to you to be free in life, all else being beyond your power: That is to recognize and profess the truth…The sole meaning of life is to serve humanity.” 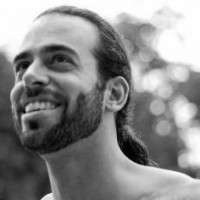 Jerome Burdi is a writer, yoga teacher and darbuka player living in New York City. He believes in the power harnessed by silence, music and shamans. Find him at facebook.com/D… Read full bio