Want to Know the Meaning of Life? Ask a Village Beekeeper.

I couldn’t believe it. I had found quite possibly the very last living melified man and he was 115 years-old.

This man was on his deathbed, claiming to have kept himself alive over the past few years by eating only his own honey. He was the oldest beekeeper in Turkey, and I would dare say, quite possibly the oldest living beekeeper in the world. He had kept bees during the time of Ataturk, during world wars, during Turkey’s rise and fall as a global power, and during hundreds of Karsian honey seasons.

His family had invited me to meet him for the first and last interview of his life.

I cleared my schedule completely. I went to work on preparing all the questions I would ever want to ask, getting my gear in shape, finishing all my meetings, and preparing to go to the village and stay with him however long it would take to hear his story.

When I re-entered the field a few months ago, walking from village to village—both documenting the honey culture of the Caucasus as a National Geographic Young Explorer as well as starting Balyolu: the Honey Road, a rural honey tasting tourism company—I knew we would face challenges.

Perhaps villagers would be reluctant to invite in visitors? Maybe people wouldn’t be interested in talking about bees and honey?

I had hundreds of expectations, but what I would have never predicted is that the interactions I was about to have about bees and honey with the villagers of Turkey’s Northeast would forever change my life and even give me one small hint as to why we are all really here.

No encounter ever plays out the same, but it almost always starts like this:

First, we open the hives, studying the way every person treats the living world around us, reading each other’s emotions, behaviors, reactions, and responses.

After digesting what the bees show us about others and ourselves, our hosts invite us into their homes and open up their stories. There have been stories where the strength of the women radiated from every colorful kilim and every small dish of yogurt. In these stories, the women tell of husbands who have moved away 20 years ago to Istanbul or to Germany, occasionally sending back money.

In some instances the husbands remarried in their new distant homes, while these women remained to keep up traditions and tend to the life their husbands discarded. These women have been left to their own devices, starting their own small rural enterprises around animal husbandry and finding ways to survive while their husbands forget them.

In other stories, the men are sweetly humble, showing their secret stashes of knitting and beaded handicrafts that they work on in their quiet retirement, their wives looking on with satisfied smirks. In some stories, women have refused to marry and instead dedicate their lives to their bees.

And in some others, there is deep loss and hardship, politics, feuds, death, and murders.

But more than the content of these stories, it is the way they are told that has lead me to re-examine my life and the purpose of my existence.

In these villages the old, the young, and the retired tell their stories as if I, or Deniz, or Arzu (our Balyolu team) might be the very last ones to ever hear them; like we were given this special gift of knowledge in the hopes that we would take these stories beyond our forgotten villages and bring them into the greater human narrative.

Yes, I study bees. Yes, I’m starting a honey tasting tourism company that supports rural innovators. But here at the ultimate intersection of humans and the natural world, what I think I am really trying to do is bring people together to be witnesses to each other’s lives.

Because as I am learning from bees and their careful keepers, this act of sharing is what makes us into the fabulous, feeling, learning social creatures that we are.

For bees, their stories and histories are engrained into their DNA, passed on in the communal raising of the hives and the hundreds of thousands of antennae-touching they do between each other every day.

For humans, it is these little story tributaries that flow into this massive great river that is a combination of our cumulative history and knowledge about the experience of living.

April is a cruel month for me. Almost like clockwork, I can reliably predict every year that my life will change completely during the month of April. It doesn’t help that April 22, both earth day and the anniversary of my father passing away, falls right in the middle, ready to stir up every emotion that lives inside of me.

As usual, April came and my life was turned upside down, making me one week late to the old man’s village. After dealing with the crisis of April 2012 and the 9th anniversary of my father’s death, I returned to the 115-year-old man’s village for my interview, only to find that he had died exactly one week previously.

Friends of mine here laugh, saying that if this mellified man had lived 115 years and he couldn’t wait one more week, then it wasn’t meant to be.

Others think about how the situation could have been worse…what if he had died in the middle of the interview? It’s true, I have already seen too many people die; I don’t think I could have handled watching another life shift from on to off, and I think everyone involved would have felt pretty terrible.

But this loss has made me realize something crucial.

I know what I am doing and what I need to be doing. I am collecting stories; I am connecting lives, and I am hoping to make everything just a little better.

I am one of these lucky people who have realized what they need to be doing, and it’s clearer to me than ever before that I need to focus on this task before me.

And even if you told me,

“Cat, it’s all in your head. Villagers tell their stories this way out of habit, you don’t need to put in the time and effort to try to understand them. Heck, you silly kid, you don’t even speak their native languages and we all know you only understand like 60 percent of what they tell you. Ultimately, their stories are basic iterations of the way we all live our lives, so take a chill pill, have a drink, return to Boulder, for God’s sake, where you can run in shorts without public ridicule and you don’t have to suffer from watching little kids torturing pigeons and kittens…”

My response would be this:

While I don’t think I can bear to see another maimed puppy (even though I surely will), quite possibly more than the villagers needing to tell the stories of their lives, right now there is something inside me that deeply craves to hear them. And if I am lucky enough to make it to retirement, when I have hundreds of bees whirring around my crazy gray head, I hope some young stubborn pain-in-the-arse pays me a visit, dying to know how I’ve lived my life and what I have learned.

And you can be sure that I will tell them one of the best stories they’ve ever heard. 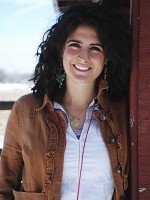 Catherine de Medici Jaffee (Cat!) is a Colorado native, a Turkish Fulbright Scholar, an under-25 US delegate to the UN, and a trottinglobe. She has collaborated with agro-lead… Read full bio