You are different. I’ve been told this my whole life.

I know I am not alone.

When I got married, which consisted of the JOP and a pizza, none of my other friends were married. I was 37.

I started writing poems in elementary school—as a college graduate all I wanted to do was be a poet.

What I did not want to do, though my terror was hidden in bottles of booze, was join the real world. So, I drank to oblivion, every night, in Boston where I lived and wrote.

I worked as a donut dealer in a coffee shop with my college education. I learned the so-called working class weren’t working class because they lacked intelligence or insight—it was more complicated than that.

I had no core

I was embarrassed by my poetry but now, I think it was because of my wandering ego; I was the low-life in Notes from the Underground or the sophisticated woman in Portrait of a Lady.

I had no self-respect either. Life happened because I was breathing.

I got a job at Harvard University, after applying almost every week for a year.

Tenacity has always paid off in my life.

I got sober for a while.

I remember in high school realizing that the crowd I ran with, who were non-conformists, conformed to each other.

We were all alike in being different.

Under a different influence

I did not stay sober.

I met up with this man who was 20 years my senior. Age does make a difference. Then my world fell apart as I lost myself in psychosis.

I worked at Harvard College Library totally crazy for nine months. I could not put it on my resume but when I came back to stay with my parents, I continued to get jobs. Getting hired was not the problem.

That was almost 30 years ago.

I am still what most would call different.

I spoke with a student who has become a friend and confidante. He is older and, in my eyes, he happens to be wiser. I told him I am different because I have a diagnosis of schizophrenia. He suggested to me the idea that we all have something—whether it is shyness or a fear or an addiction—we all have something that makes each individual feel that they too are different.

We are more alike than we are different

What I know for a fact is that we are all more alike than different.

I am fond of telling my students, especially the younger ones, that any thought they have had, no matter how bizarre or strange, was probably thought by the person next to them.

Schizophrenia gets a bad rap. The crazies on Law and Order often get that label.

Do I advertise? Not as a rule…I just don’t tell people about my history and rarely do I go into the details, unless someone is very close to me.

Do I identify myself as schizophrenic? No. Most people don’t even know what that means and often it is mistaken for dissociative identity disorder.

Do I identify myself as mentally ill? Never did, even when it may have described me well.

As I said, we all have a mental health condition. Mine requires medication and some vigilance, at times.

I told a therapist who was very overweight that she too had a mental health condition and that basically we were no different. You can imagine how that went over.

When I first share this with others they often tell me how well I am doing. I try to think of creative ways to return the compliment.

Why wouldn’t I be doing well? I am smart and capable. I really am no different than anyone else.

Was it the most painful thing that happened to me? No. It was the most terrifying and many bad things happened while I was not in my right mind.

Am I afraid of being sick again? No. There is no need for that to happen because I understand it, which took time.

Do I go to therapy? No. I found I had to try to boil things down so therapists could understand me.

Did I go to therapy? At one time I had not choice and yes, it helped. I think we all talk about traumas until we’re done processing them.

Why am I sharing this here?

Well, I got the idea of square holes and round pegs and had to write it out.

But we are all always in that process, with or without awareness. There are many out there with this diagnosis who participate fully in life who’d you never think had this condition.

Schizophrenia is a thought disorder and psychosis is not perceiving reality as you know it: hallucinations, voices, delusional thinking. There is, as Douglas Brooks said so eloquently, too much subject in delusion.

And if I could change anything, I would not need my medication.

If I did not need it, that would mean I healed.

Have I given up on that?

Not yet—stay tuned—talk therapy helped but it was everything else I did and what I continue to do that leads me to wholeness.

Edith Lazenby is a full time yoga teacher, trained at City Fitness in Washington, DC and Willow Street Yoga Center in Silver Spring, Maryland. She has been writing poetry since she was nine years old. Poetry is her first love and yoga continues to feed her heart. She writes because she loves it. She teaches because she loves it. She tells her students all the time: do it because you can. That works for her. She believes in creating opportunity. She believes in helping herself and others. She thinks faith is the most important gift of life, because when we lose everything else we still have that in our heart. She believes the natural state of being is happiness, or bliss, or Ananda. Life is a celebration. Poetry and yoga help her celebrate. Edith’s blog and website: www.ediyoga.wordpress.com. 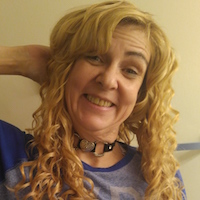 Edith Lazenby’s first love is poetry. Her second is yoga. Life unrolls in ways she could have never have imagined. She loves to love and live life daringly. Leap and the… Read full bio