The Yoga (Every) Body: Debunking the Myth of the Skinny Yogi. ~ Ann Halsig

It was February 7, 2007. I remember because I was slightly hung over from celebrating my partner’s birthday the previous evening, which was why I was running late.

It had snowed the night before, but I had only started my job a month earlier and there was no way I was going to be late.

As I came out of our second floor flat on a busy street in Streatham, South London, I could see a bit of snow on the ground and my bus approaching in the distance. Gently, I began to run. I was cautious with each step and as I crossed the street, I think a few cars even slowed down to let me pass.

I made it all the way to the door of the bus.

And then I slipped on a patch of ice.

As did all kinds of pain.

My arches had fallen and so had my confidence. I had learned to live with the nearly constant pain. Attempts at jogging often ended in tears as I grappled with how unfit I’d become and how impossible living in my body felt.

My partner and I were planning to leave the UK toward the end of 2010, but we had a few months left. Seemingly out of nowhere, he suggested we enroll in a yoga class nearby—so commenced the beginning of the end of that terrible time in my life.

It’s absolutely misleading. It isn’t just the usual suspects—women’s magazines—to which I refer. From the most prominent yoga magazines to a simple Google search, finding a single big-bodied yogi is next-to-impossible.

I take issue with this for three reasons.

Firstly, I know from personal experience that people with bigger bodies are often the people with the worst body images in the world.

Secondly, the kinds of exercise the media tells heavy people to do are often very inaccessible and self-defeating. Power walking when you’re 100lbs overweight isn’t just painful; it can be downright dangerous.

Finally, Satya or truth, is a massively important principal of yoga (which isn’t just Hatha, after all) and withholding this truth is just plain bad karma.

This isn’t just about weight-loss, either.

“Research shows that a healthy person of size has a better chance at longevity than a thinner person who is out of shape.” ~ Meera Patricia Kerr, author of Big Yoga: A Simple Guide for Bigger Bodies

Whether it’s losing weight, gaining confidence or learning to love one’s body again—or for the first time—yoga practiced responsibly can bring about a slew of beginnings for people struggling with their weight.

Dr. Moshe Lewis, MD, MPH finds that, for people who haven’t had a real exercise-oriented lifestyle, establishing a restorative yoga practice is more effective than other types of exercise to get the ball rolling.

But what if the idea of working out in public is terrifying?

“Overweight people often feel that in public they’re either seen all the time or invisible.” ~Lauren Rose, psychotherapist and yoga instructor

Huffing and puffing, red in the face and drenched in sweat—I can tell you which of these apply when a heavy-set person works out publicly.

One of the biggest benefits to yoga is that it can almost always be practiced in the comfort—and emotional safety—of one’s own home.

That isn’t to say that one’s practice isn’t profoundly enhanced by the presence of a teacher and it’s really important to note here that particularly difficult asanas should never be attempted alone until they’ve been mastered—by anyone.

But the point is getting the process started.

When yoga instructor Anna Guest-Jelly, owner and founder of Curvy Yoga in Nashville, Tennessee, opened her studio, she found that many bigger-bodied potential clients simply couldn’t muster the courage to attend a class, so she developed an online 30-day course to meet that need.

Whether healing starts in a studio or one’s living room, then, is really irrelevant.

Within the Body…and Beyond

What could be more disparate than the profound detachment many (if not most) overweight people feel from their bodies and the ultimate aspiration of Hatha yoga, to dive deeply within oneself?

The journey from the former to the latter can be daunting.

Because, ultimately, losing weight—if that is what one needs to do to be healthier—is going to require a serious relationship adjustment in terms of body and soul.

Carrying out these inspiring interviews, I was reassured that I’m among friends—certainly with regard to my feeling that Hatha yoga can be ideal for bigger-bodied people, but also in my disappointment in the media for what feels like a blatant misrepresentation of what I consider one of humankind’s greatest achievements.

Here’s hoping yoga’s most important lessons never get lost in all the hype. 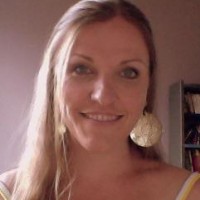 Ann Halsig is a freelance writer with a background in Social Science and Ethnic Studies. She has lived and worked in the U.S., England, the Philippines and currently resides i… Read full bio