Why I quit the New York Times to join Balkan gangsters.

This time last decade, I was an ambitious and idealistic New York Times foreign correspondent.

I’d been hired to report on the Balkans, but within a few months I’d resigned, freaked out by my boss’s support for starting wars. Disillusioned, I went native in Belgrade.

A new friend of mine had better ideas, I thought: we could organise a Balkan sort of Woodstock, on an island in the Danube in Belgrade. He said music could spark a Serbian revolution.

Who was I to disagree? The country was run by a wartime mafia, and most young people dreamed of leaving. But what if we made it a cross of Ibiza and Glastonbury? Perhaps a brighter future would ensue.

To fund this transition, I hustled all my contacts, from NATO to a Nobel Prize-winning Auschwitz survivor. But shady local businessmen had other ideas. Mr. Big muscled in and embroiled us with his henchmen.

Despite our best intentions, pretty much all the things that could go wrong soon did.

This video sheds some light on why that happened.

And this interview explains what freaked me out.

Interview: The New York Times journalist who quit in disgust

A Rough Guide To The Dark Side

Most mainstream media journalists would kill to get one of their stories on the front page of The New York Times. But when that happened to the newspaper’s Balkans correspondent 2003, he was less than thrilled.

Daniel Simpson had already resigned in disgust at the paper’s support for starting wars, and was serving out his notice. He had reached what he calls “a mirrored ceiling” in his career.

The phrase—in Simpson’s gonzo memoir, A Rough Guide To The Dark Side—conjours up an image of the journalist taking a long, hard look at himself before breaking through the mirror. But the story is, like most stories in Simpson’s life, a little more complicated than it first appears.

“I was alluding to the warped world beyond, through Lewis Carroll’s looking glass, while also trying to capture how I felt,” he tells Green Left Weekly.

“It only seemed possible to rise higher at the Times if I bought their illusions, and having seen through them, this would have been consciously corrupt.

“Until that point, I’d been unconscious of cooption as a journalist—like most of my peers. But as my eyes lost their scales, I saw my own flaws more clearly, and freaked out.

“It wasn’t a question of breaking through, more of running as fast as I could in the opposite direction, which of course led in time to me realising I’d been wrong: there’s no escape from being oneself, unlike the addict in me fantasised.

“And that was when the long, hard look at who I was began in earnest, resulting in the book.”

That book charts the English-born Simpson’s journey from private schoolboy and Cambridge graduate, to festival organiser and drug smuggler, with a promising start as a corporate journalist thrown by the wayside. It ends with Simpson’s drug addiction spiralling into another dimension.

“The previous draft of the final chapter was five times as long, and it was largely cut and pasted from my notebooks,” he says.

“I was trying to reflect what happened as I experienced it, which meant trying to make psychosis come to life. So I sat down and wrote, and wrote, until all my pens ran out of ink.

“At the time, I was sure this work would be a masterpiece. Upon rereading, after seeing a shrink, it clearly wasn’t.”

Even so, the ideas that inspired him shaped the book.

“The structure is a rip-off of Dante’s Inferno, descending deeper into hell, and a series of Faustian pacts defined the plot,” he says.

Unlike most mainstream media journalists, Simpson is deeply introspective, constantly questioning the way he sees the world and himself. His complex character, coupled with the complicated characteristics of the Balkans, did not make for ideal NYT copy.

“Covering the Balkans for The New York Times consisted of monitoring whether The Serbs had agreed they were Bad Guys,” he writes. “Trying to explain why they hadn’t, or how ‘we’ made the opposite more likely, was tantamount to ‘understanding’ suicide bombers.

“And in the fog of War On Terror, this wasn’t on, especially not at a paper boasting ‘All The News That’s Fit To Print.’”

Simpson’s book certainly won’t rebuild any of the bridges he has burnt with the corporate media—and when asked about the industry, he is scathing.

“There’s something about the general smugness in most newsrooms that’s insufferable,” he tells GLW. “All that puffed up self-contented self-importance, as if ‘telling the story’ didn’t require you to ask whose agenda you might further in the process, and whether you might have one yourself.

“When I tried to discuss that sort of thing, people said I was biased, or cynical, or worse. I found that quite exasperating.”

Simpson’s natural allies would seem to be media critics, but his consistently critical nature doesn’t always make him an easy bedfellow. In 2004, he approached the editors of the British watchdog website Media Lens to suggest they collaborate on something more constructive than critique: original reporting.”

We should be sceptical of binary analysis, like corporate bad, independent good, especially when the former does most of the reporting that the latter reinterprets,” he says.

But Simpson’s discussions with Media Lens petered out. They took issue with his questioning of everything, and questioned his intentions, which he thinks were unrealistic.

“As with my experience with the Times, it says as much about my own shortcomings as theirs,” he says. “I got lost in trying to find the perfect answer, whereas they were getting on with something flawed.”

He also once got into an 8500-word argument with the intellectual master of media criticism, Noam Chomsky, over Chomsky’s support for a writer who denied some Balkan war crimes. But Simpson now questions the “merits of fixating on fractions of anyone’s work, however important it is to be accurate.”

Sometimes he can even seem conflicted, possibly rueful, about leaving the NYT in the first place, if only to help his other work get published.

He now pays the bills with a low-profile job in investment research, while dabbling in activism. He once produced a fake Financial Times, but admits to “a long-standing pattern of short-term commitment to anything”, until he saved up for a six-month break to write his book.

“It was much the same with brief flirtations with independent media,” he says. “Firstly, there wasn’t much in Britain at that time, apart from the likes of Socialist Worker, which seemed as dogmatic as the mainstream media world I’d left.

“More importantly, most alternatives weren’t very interested in reporting—or at least understanding what it meant. They’d conflated it with commentary, which is fine, if you acknowledge that’s the goal.”

Some may see Simpson as simply exhausting, but he has a saving grace. A Rough Guide To The Dark Side is packed with the kind of uncontrived humour that will leave readers laughing out loud while wondering, “Hang on, how did he do that?”

Mat Ward writes for Australia’s Green Left Weekly, where this story was originally published (it’s reproduced with his permission). 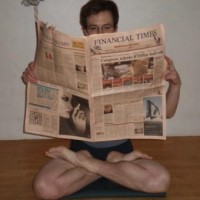