The Power of Letting Go: How Creativity Serves Our Destiny.

It’s not the strongest that survive, but the ones who embrace change.
~ Darwin

I just finished the book, Sex at Dawn. Easily, in my opinion, one of the most influential and socially-inquisitive anthropological works of our time.

It’s a study of the evolution of human sexuality from pre-history to today that states we as a species have unnecessarily and quite falsely placed ourselves in a box of universal monogamy as the key to successful relationship. I know what you’re thinking—another book about polyamory. Another hippie-dippy summer of love symposium of an experiment we all know went awry a long time ago.

As a fellow cynic I assure you, it’s worth the read—if nothing else then for the jarring questions:

Are we living in a rigid, socially constructed idea of relationship that just may be creating the dis-ease?

Are we holding so tightly to our history that we can’t possibly make room for the present?

Are we living in fear and shame behind the scenes (monumental divorce rates, adulteries, and broken families) only to plaster a smile on our faces and laugh together during “Desperate Housewives?”

Don’t get me wrong, I’m not making an argument either way.

What I am wanting to say is that the book helped me realize (again) that what appears to be the norm may be calling for another take, another look, and a new perspective.

What would it feel like if we could see through jealously and possession in relationship? What if we gave ourselves and our significant others the benefit of being human, our thoughts and feelings and—dare I say it—needs? Free of fear and judgement? What if we were actually empowered to say to each other what we feel without concern? Not to emotionally dump or wound, but to access levels of another kind of intimacy—intimacy of the heart, beyond and in addition to sex?

This post is not about sex or relationship. It’s not even about intimacy. It’s about power and our relationship to it.

Overt power, at the end of the day, all boils down to control. The powerful individual, the political party—even the physically powerful—all wield influence in their respective spheres. Money (a form of energetic power), fulfills desire (to a point), and desire often controls our actions. So power is control, which implies limitation (this, not that). And control runs on fear (actually all of our actions run on fear, but that is content for another post).

Power is so coveted because we (think we) thrive on a semblance of control. We’re fearful of what may happen if we were to adapt to shifting currents. But to blindingly exert your will is to swim against the current—to fight and to push and struggle with all your reserves—only to mourn to all who will hear that the place you find yourself looks suspiciously like the place you began from.

So the problem is that our understanding and our most common applications of power, in their subtle effort to control, create rigidity, binding structure and systemic misalignments in our lives and our bodies.

Misalignments that create pain and misunderstanding and land us back where we began—in our failing relationships, our unsatisfying careers, and our uninspired world-views.

As stated by David Whyte,

…people who follow rules, written or unwritten, too closely and in an unimaginative way are often suffocated by those same rules and die by them, quite often unnoticed and very often unmourned.

Why? Because here’s the catch: power is about spontaneity and creativity too, but we’ve forgotten.

The word “Shakti” in sanskrit can be roughly translated into “power.” In the melee of modern day India, you see this word plastered everywhere —the Shakti construction company, the Shakti high-profile business, Shakti energy bars, Shakti trading company and the list continues. Each application of the word is a pin-focus of the quintessential aspect of the Divine—that which moves, strong and unyielding.

On the flip side of the same coin lives the translation that describes Shakti as “the creative pulse of the universe.” The limitless and ever-dancing play of spirit that is powerful only because it is free to move. To destroy and create anew in ever-fresh spontaneity. Over and over and over. As Paulo Coehlo says,

If you are brave enough to say goodbye, life will reward you with a new hello.

That’s the antidote, the panacea, and the ticket to living a truly powerful life. Can we say goodbye to old paradigms, old social norms, old ways of being in relationship? Can we move freely enough to go with the currents?

To be empowered is to move as a devotee of spirit, silently and openly—from the inside out.

Control and manipulation—our societies most overt demonstrations of power—live about a foot in front of you always darting about, dodging one fear-based trigger after the next. Their favorite word is “‘should.” Their mantra is “not-enough.” Their form moves in the breeze like concrete…and they’re tough paradigms to be rid of.

So don’t be fooled—letting go of something is not complacency. Complacency fringes on becoming a victim to circumstance. But to empower yourself to act in alignment with life’s ever-changing and boundlessly creative rhythms is to listen deeply first, then participate. In other words, don’t assume you know what’s best for you or your loved ones. Don’t get stuck in “the norms” of society. Listen to them, observe them, understand your boundaries and then move with great freedom of heart.

Because this existence thrives on change, what was once the perfect structure will eventually fall away. When that begins to happen, no matter how scary or uncomfortable…let it. Somethings dies, something is born.

The authors of Sex At Dawn, Christopher Ryan and Cacilda Jethá, are called “renegade researchers.” They dared to debunk everything we “think we know” about sex and relationship. As I read their thorough, educated and often hilarious research, I couldn’t help but reflect: those who are creative enough to see things another way, to poke at the standard, and announce their findings to the world have always been renegades, societal outcasts, misfits and troublemakers. We don’t often embrace a challenge of our neat, compartmentalized worlds. Too confusing, too scary, too far out of our…control. God bless them. With the mess we’ve made of things, isn’t it worth the contemplation?

It has been one incredibly powerful year that for many of us, has felt unyielding in it’s lessons.

One after the next, like waves of the ocean, our lives have nudged and towed us toward a new perspective and a new way of being in the world. I have felt in the stormiest of seas, the call to soften and release, so as not to break in our rigidity on the rocks. In the placid and gentle waters of complacency a new kind of strength was born—one that sings of silence first and moves like a great cat in the night. It is the dance of contrasts that I have come to see as the highest form of beauty.

As the heat of August rests into the introspection of Fall, my invitation to you is to move into your life without fear. To let the waves carry you away from the rocks and deeper into the heart. May spontaneity rule alongside deep listening and steady trust. And when the rubber hits the road and all is nearly lost, ask yourself: what will you be willing to do? How fully, completely and entirely can you let go? 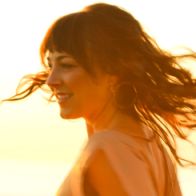 Shakti Sunfire is an internationally celebrated empowerment educator through movement, mysticism, and mindfulness practices. A leader of the international hoopdance movement a… Read full bio